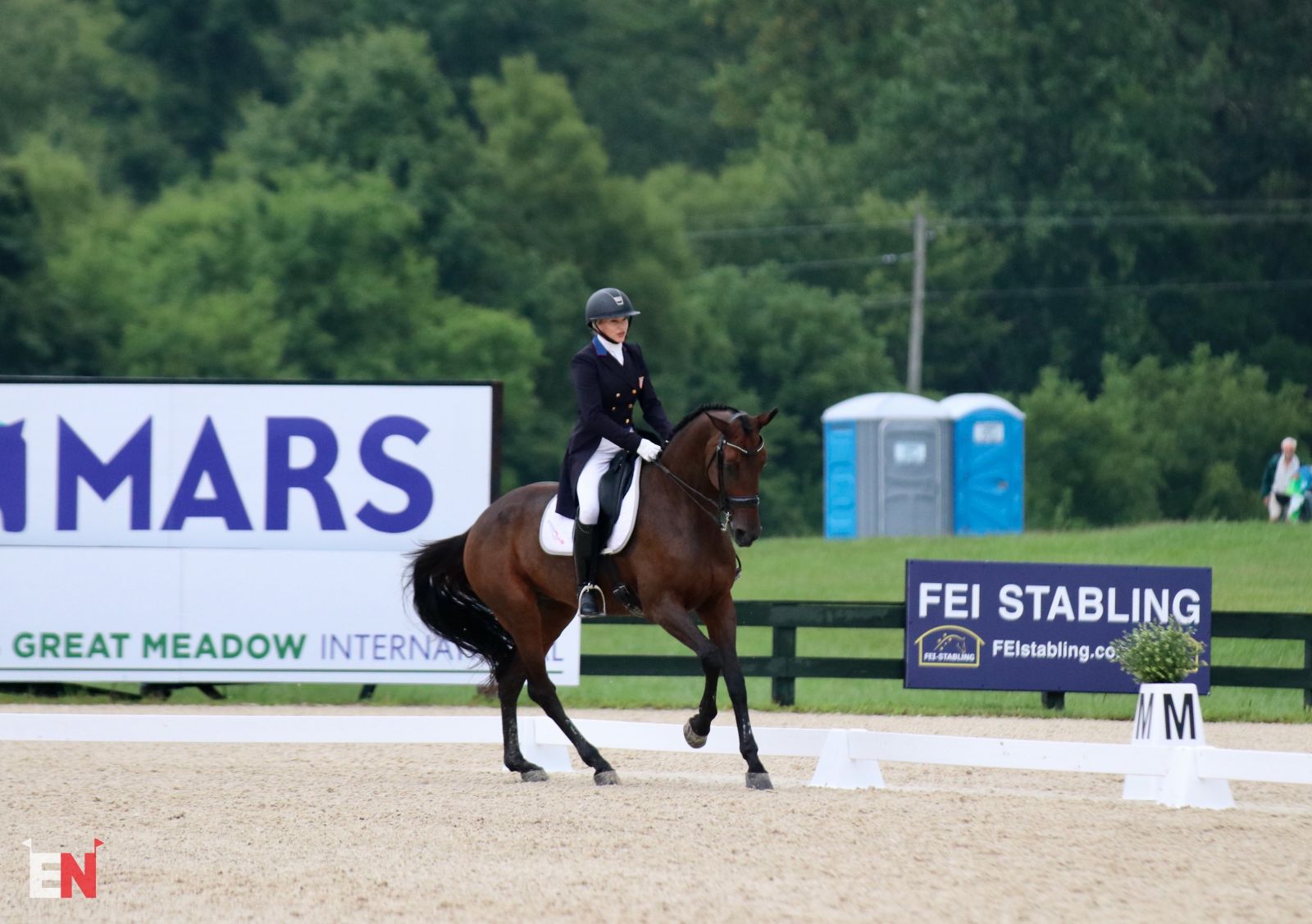 This week’s coverage of MARS Great Meadow International is brought to you by Kentucky Performance Products.

Day one of CCI4*-S competition is done and dusted (and rinsed, thanks to some early showers), and unsurprisingly it’s Marilyn Little and RF Scandalous, owned by Phoebe and Mike Manders as well as Ms. Jacqueline Mars, who’ve taken the early lead on a score of 23.4. In truth, it wasn’t the most “on” the 16-year-old Oldenburg mare has been, but Marilyn is always grateful for her horse of a lifetime who even on a less than perfect day can still throw down to lead a large four-star division.

“It’s such a goalpost event, a big date on the calendar, but it comes early in the season and the horses definitely get a sense of the moment in there,” Marilyn said. Indeed, this morning dawned much cooler than yesterday’s Tokyo-like conditions and added a fair bit of rain on top of it, so these conditional changes made for some spicier moments, particularly in the warm-up. “There were a lot of explosions, a lot of exuberance happening in the warm-up arena, so on a day like today you just have to adjust your expectations. There are some days where you can go out and think, ‘Ok, this is going to be awesome’ and really go for it — and this just wasn’t that day. So it certainly wasn’t one of our best tests, but I was so pleased with how she just stayed focused and relaxed. I’m thrilled with her nonetheless.”

This is “Kitty’s” first event of the fall season and her first since finishing 25th at Kentucky in April, and Marilyn is planning to use this run as fitness as she looks ahead to the $60,000 USEA American Eventing Championships Adequan Advanced Final in two weeks and the inaugural Maryland 5 Star at Fair Hill.

“This is a big fitness run for her,” Marilyn, who bases in Florida year-round, said. “It’s interesting trying to train in Florida during the summer. It’s been a slow, easy prep up towards this. We don’t have a lot of terrain in Florida, so this will be a great prep.” 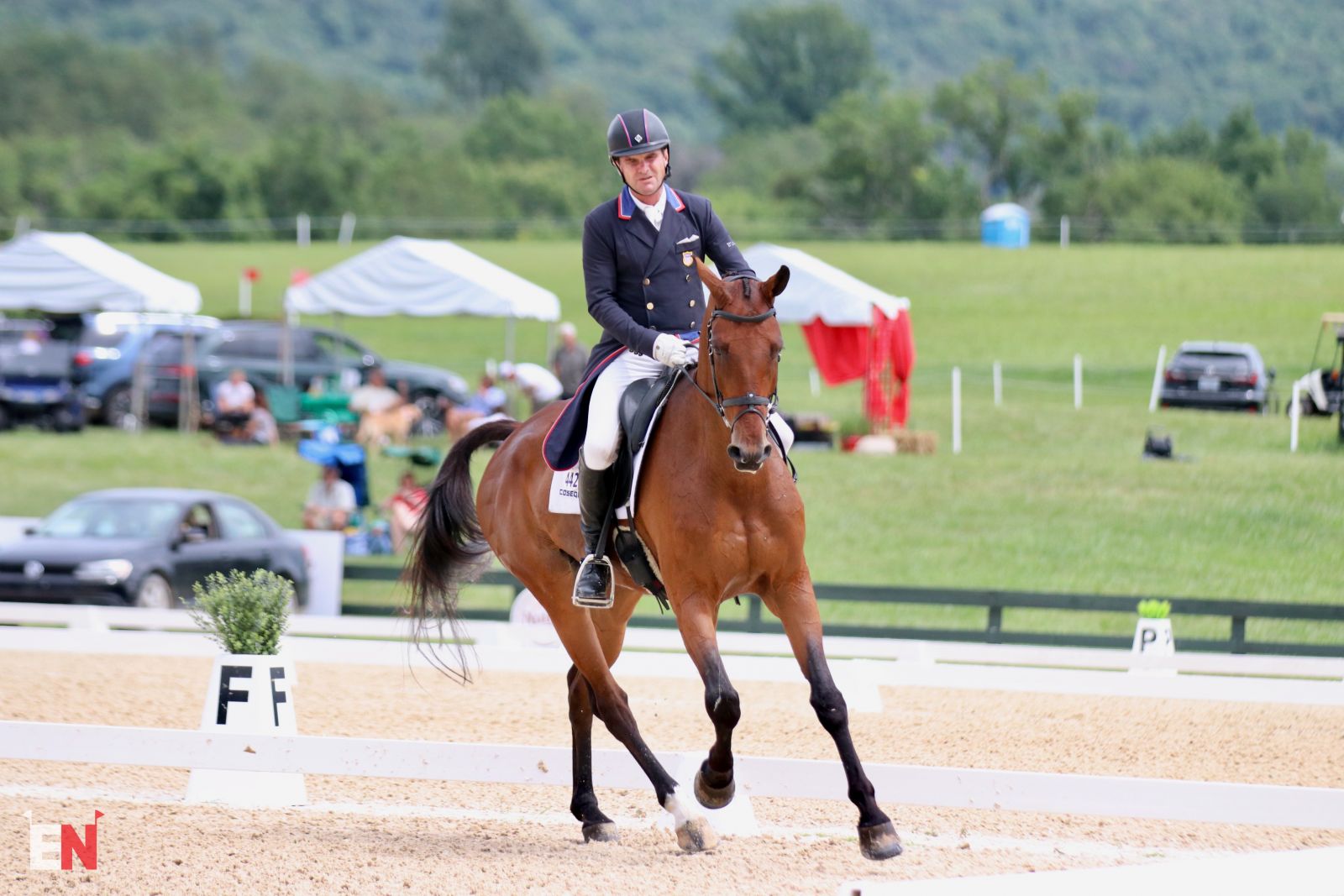 Second-placed in the early going and also aiming at Maryland in October are Phillip Dutton and Fernhill Singapore, who scored 27.6 from judges Robert Stevenson and Valerie Pride. Fernhill Singapore (Singapore – Riedellia, Animo), owned by Annie Jones, Tom Tierney and David Vos, stretched his legs in the Intermediate at Fair Hill after his post-Kentucky break, and Phillip says he’s really beginning to step into his potential.

“Singapore has always show tons of potential and talent on the flat, but it’s been really hard for me to bring it out,” he said. “I was really pleased today and hopefully this will continue on for us.” Phillip is also on the Maryland track with the Sea of Clouds Partnership’s Sea of Clouds, who’s 17th after dressage on a score of 32.4. 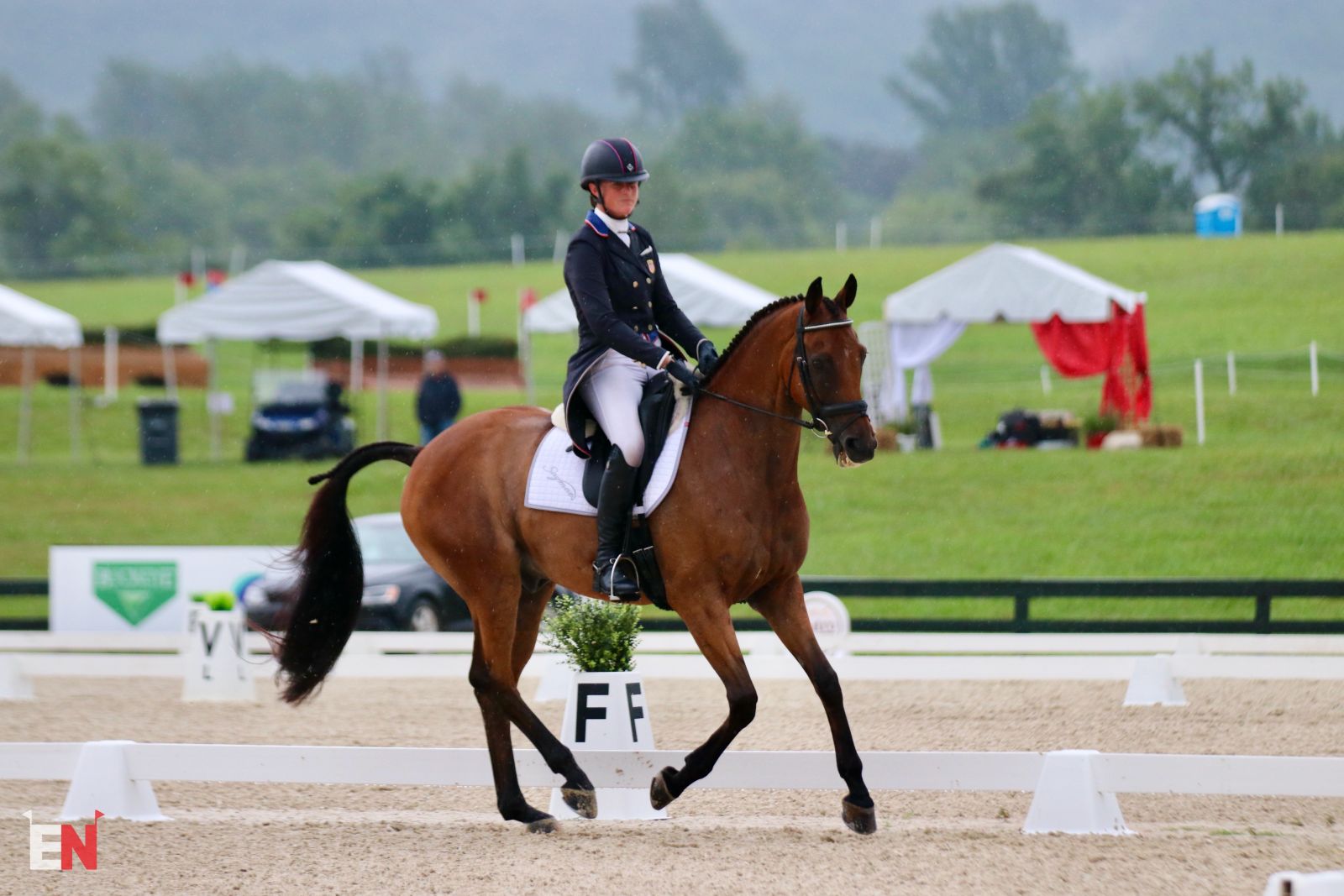 It’s a special weekend for all the riders who have horses owned or partly owned by Ms. Mars, as she’s been posted up in the VIP area cheering on her horses. Particularly adorable were Lauren Nicholson‘s Vermiculus (Sazeram – Wake Me Gently) and Landmark’s Monte Carlo (Formula One – Glamour), who both peeked over to check out the source of the cheers after their final salute. Vermiculus will be the highest-placed of the Nicholson rides, earning a 27.7 to sit third after dressage.

“It’s an event I can hear Ms. Mars cheering from wherever she’s watching and that always gives me a boost,” Lauren said. “We’ve had both [Vermiculus and Landmark’s Monte Carlo] from their first tides and events and we’ve been around so many tracks together. I think the horses know her cheer as both of them looked right at Ms. Mars after their final halts like, ‘That was good mum, right?'”

“‘Bug’ had an early draw but put in a good test,” Lauren continued. “At this point in his career, he’s fairly consistent and we’re focusing on just inching out some more points in the work. We’ve changed the warm-up a bit the last couple events and although it’s not his best score there was a lot of work I liked better, and we can clean up other things for the big events.”

Landmark’s Monte Carlo, who put in a strong effort for a 30.5 to sit in 10th, has become a consistent and accurate performer for Lauren. And while perhaps not the flashiest, he’s one she can ride to squeeze as many points as possible from the judges. “‘Patty’ is just one of my best pals at this point,” Lauren said. “In his own way, he tries so hard every time. As long as the course has been wheeled tight he’s in for a chance at being competitive [remember, this is the horse with whom Lauren came home bang on the optimum time at Kentucky a few years back, earning her a Land Rover lease for a year]. He’s a horse that you love a track that no one makes the time on because he loves to be quick.” 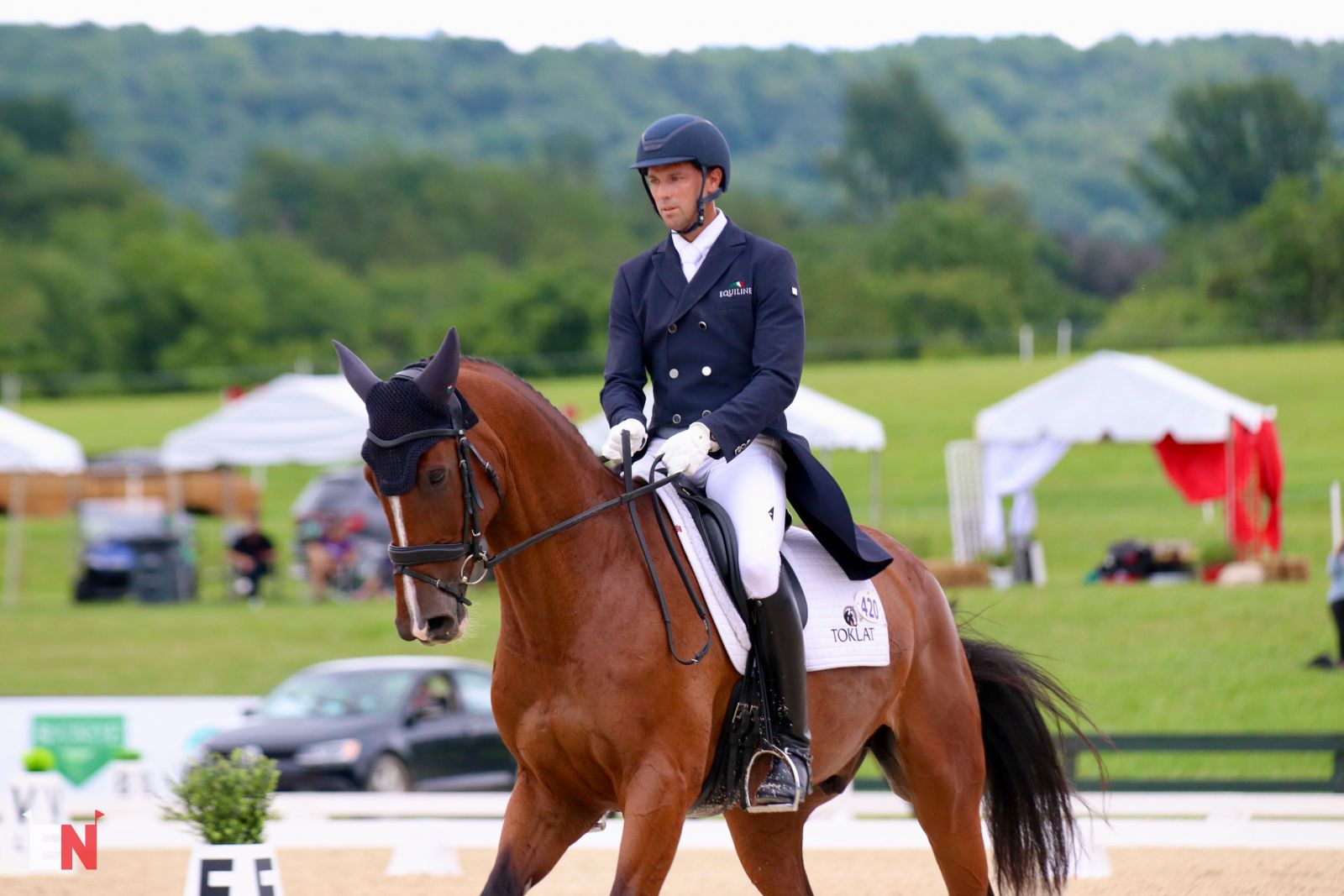 Will Coleman and Off the Record. Photo by Sally Spickard.

Will Coleman finishes the day with two horses in the top five in the Off the Record Syndicate’s Off the Record (4th – 28.0) and Hyperion Stud LLC’s Chin Tonic HS (5th – 28.2). Will is soon to be once more Aachen-bound with Off the Record as they’ve been named to the U.S. team for the FEI Nations Cup happening in Germany September 15-19. He and “Timmy” also traveled to Aachen as an alternate pair for the U.S. Olympic team but were ultimately not needed to join the team. With that in mind, this will just be a final prep run for Off the Record (VDL Arkansas – Drumagoland Bay, by ARD Ohio).

“He’s in a good place and I just want to give him a nice run this weekend and continue to prepare Aachen,” Will explained. “Anytime you get a chance to go to Aachen it’s really special. It’s a very magical place. If you look at that Wall of Champions there, it’s truly the greatest horsemen and horsewomen we’ve ever seen. It’s Olympic level competition — basically a seven-minute five-star, and it exemplifies excellence. So you’ve got to come there with all your ducks in a row. I’m just privileged to be able to go and compete there.” 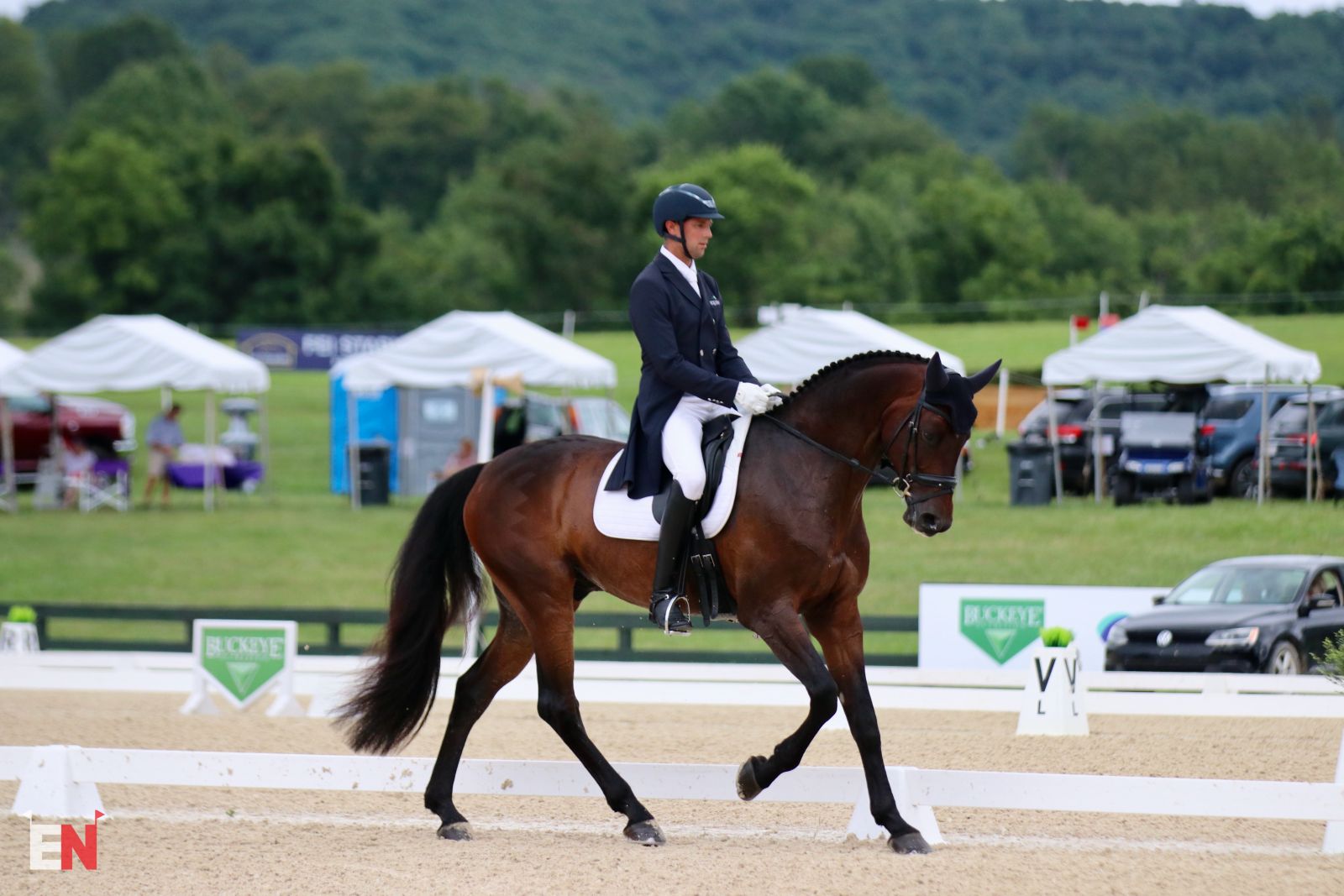 Will Coleman and Chin Tonic HS. Photo by Sally Spickard.

As for the 9-year-old Chin Tonic HS (Chin Champ – Wildara, by Quinar), who is contesting his first CCI4*-S this weekend, there’s still room to grow, but a sub-30 in your first attempt at the level is certainly not a bad way to start. Chin Tonic HS is a very flashy, elegant horse with an immense amount of presence, and though Will was the very last for the judges to see today they surely perked up in their seats a bit to see this one coming down centerline. That said, some of that flash comes from excitement, so Will says he’d like to think there’s even more in there once the Holsteiner gelding has a few more miles. This is one he’s taken his time producing, as so often such natural brilliance requires some tact and maturity to properly harness.

“His owner, Hyperion Stud, and I have always felt like we wanted to give this horse a lot of time as we’ve brought him up the levels,” Will said. “We’ve had him since he was two-and-a-half years old. He was slow maturing but we feel like he’s approaching his physical peak and we feel like hes ready to kick on and earn his stripes at the four-star levels.” 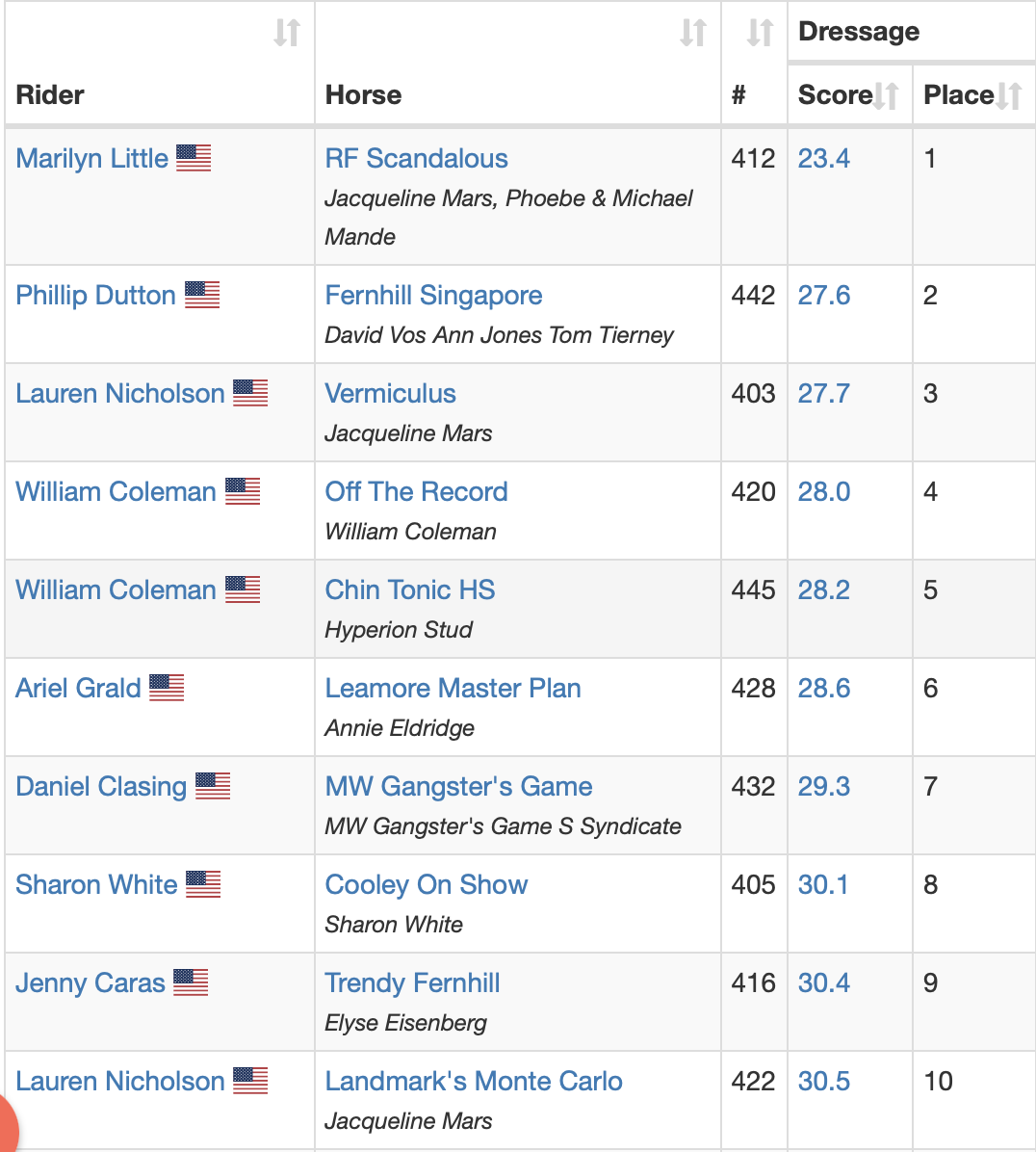 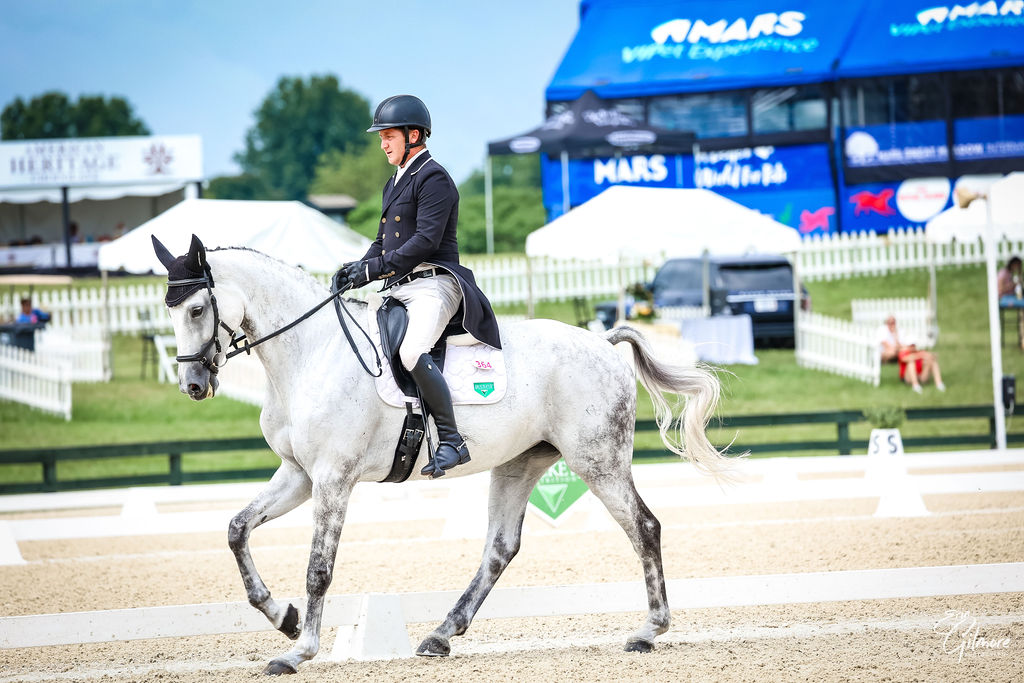 Leading the way in a huge CCI3*-S division will be Kurt Martin aboard Debbie Adams’s D.A. Lifetime (Lingh – Timeless, by Carpalo) on a score of 23.2. This 9-year-old Holsteiner mare is aiming for the CCI3*-L at Maryland in October. “It’s been such great opportunity to have another great mare under me,” Kurt said. “I can’t thank the owner enough for this fantastic horse. We have built a great partnership in the last two years and the sky is the limit. We’re looking forward to a great weekend at a great venue, and we’re lucky to have this event so close to home. ‘Clarence’ always tries her best so I’m excited for the future with her.”

Nearly all of the top five in the CCI3*-S divisions are sitting on sub-25 scores, with Missy Ransenhousen and Jeff Kibbie’s Slow Heart Break sitting second on a 24.2, followed by Ariel Grald — who took the lead yesterday and weren’t threatened until later today — and Annie Eldrige’s Diara in third on a 25.6. Dan Kreitl and Kay Dixon’s Horales sit in fourth after a beautiful test that earned them a mark of 25.8.

Truthfully, it’s incredible that Dan is here competing, as life has thrown his family a horrific amount of curveballs recently. Dan’s wife, Alyssa, is currently undergoing chemotherapy to battle pseudomyoxa peritonea, or cancer of the appendix, and also recently gave birth to the couple’s daughter, Magnolia, who has had to stay in the NICU. In an effort to help the family get through this exceptionally difficult time, friends of the Kreitls started a Meal Train donation site, and I’m sure they’d much appreciate any assistance. You can do so here. 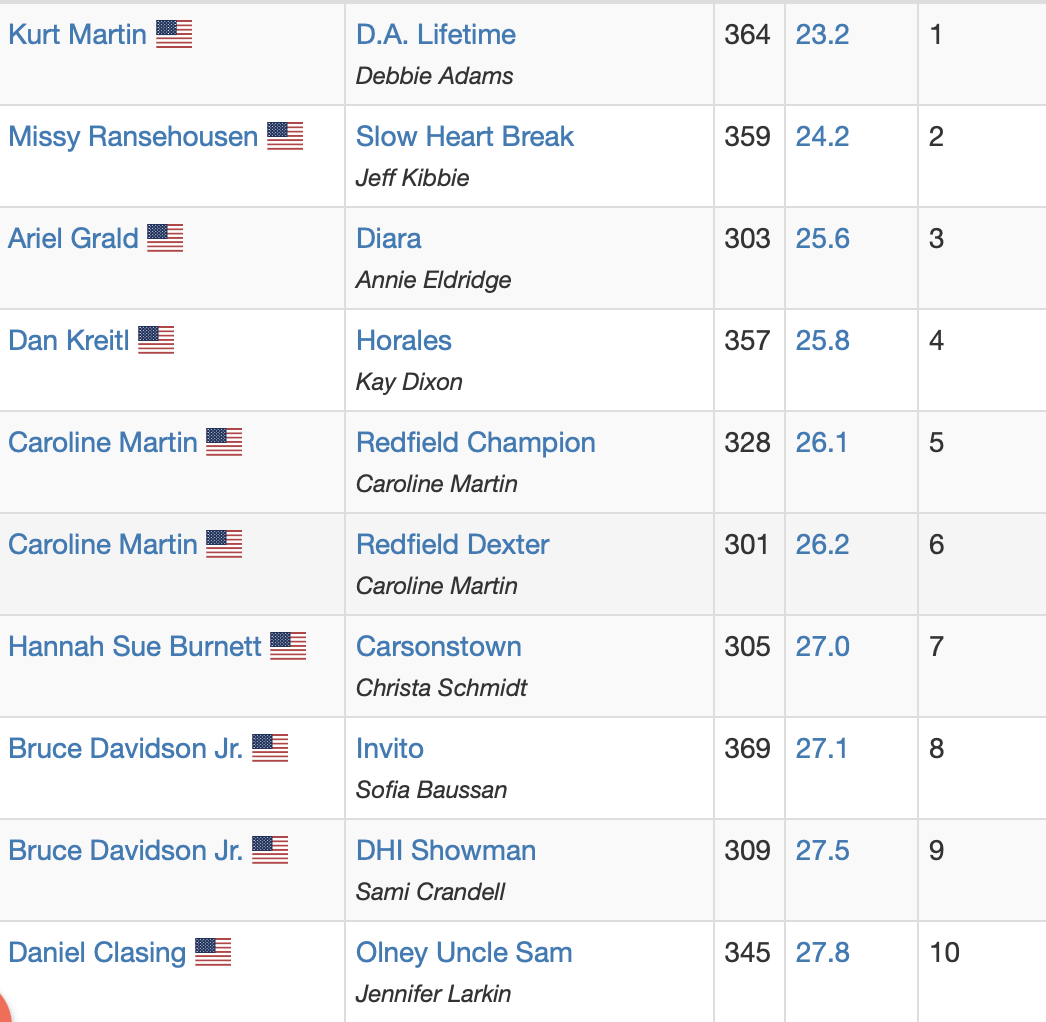 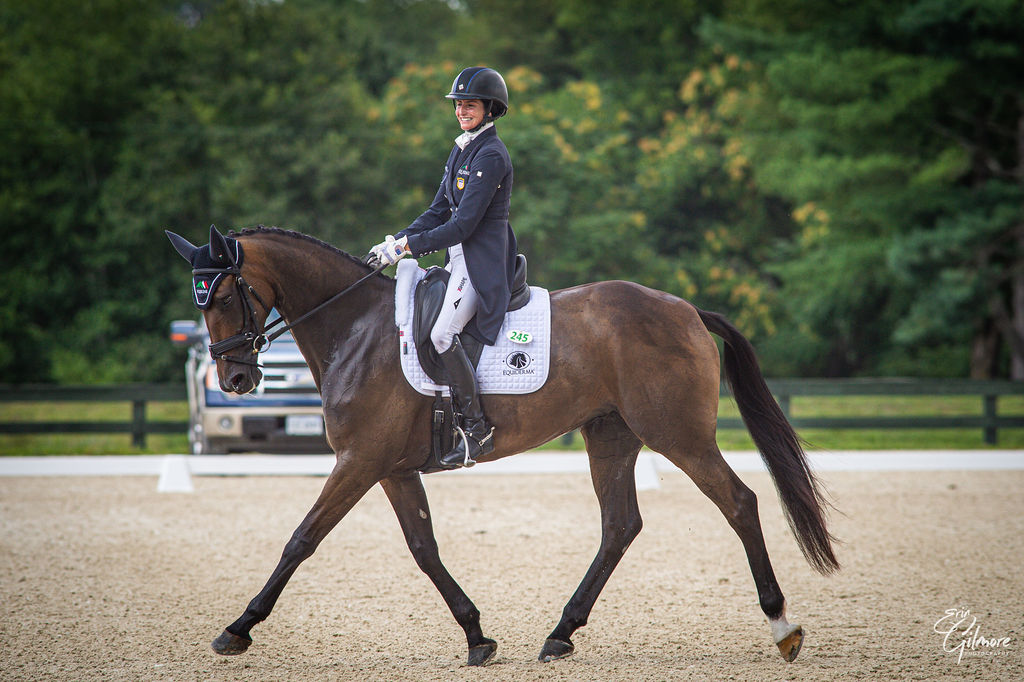 You may recall hearing about a horse that had gone missing in Florida in the spring of 2020. Keepsake, a 6-year-old Dutch Warmblood mare by National Anthem bred and owned by Nina Gardner, jumped out of her field at Jennie Brannigan‘s farm and ran away last March. This is a particularly special mare to the Gardners and to Jennie, who competed her dam, Vidalia through the three-star level. “Peekaboo” was Vidalia’s last foal, and while any horse going missing is cause for panic, Jennie was soon rousing the ranks on social media to put out an all points bulletin. Somehow, miraculously, the mare was found after six days — a harrowing experience for all but certainly one with a happy ending.

Now, Keepsake is making her FEI debut and finds herself leading the way on a score of 26.0. She’s been a consistent competitor for Jennie, finishing no worse than second in all but one of her 2021 starts. Most recently, she finished on her dressage score to win the Preliminary at Fair Hill earlier this month.

Second in the CCI2*-S, keeping it in the Brannigan clan, are Alyssa Phillips and her own Cornelius Bo (Concours Complet – Charlotte, Carismo), whose penchant for collecting blue ribbons has made him quite famous quite quickly. This pair will head into tomorrow’s show jumping on a score of 27.5.

Completing the top three in the CCI2*-S are Jane Jennings on her own Larano 5, who earned a score of 27.3 in the 9-year-old Holsteiner gelding’s FEI debut. This pair most recently finished fourth in the Preliminary at Fair Hill.

Tomorrow brings us the show jumping action, beginning with the Preliminary divisions at 8 a.m. EST, the CCI2*-S at 10 a.m. EST, the CCI3*-S at 12:18 p.m. EST and the headlining CCI4*-S at 3:22 p.m. EST. All divisions will run cross country on Sunday. You can follow along live on H&C+, which has featured excellent commentary from Karen O’Connor and Lynn Symansky — more info on that here.