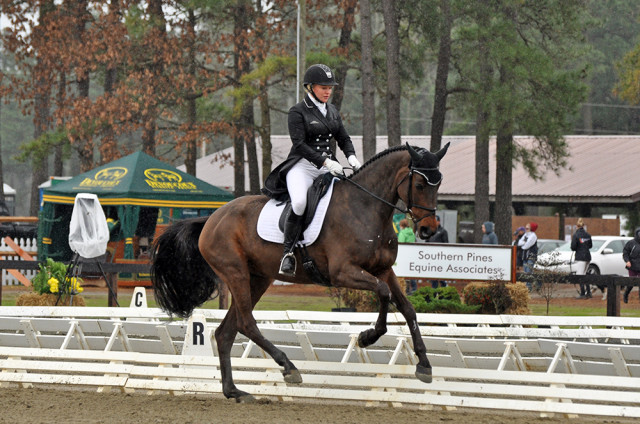 Marilyn Little has proven she is not to be underestimated in the dressage court as she continues to produce flawless tests on multiple horses each weekend. Today was no exception, as she currently leads the CIC2* and the CIC* with RF Scandalous and RF West Indie respectively. She is also third in the CIC1* after dressage with RF Overdressed.

RF Scandalous, owned by Raylyn Farms and Phoebe and Michael Manders, was the last horse to compete in the Setters’ Run Farm CIC2* before the lunch break this morning. The performance was stunning from start to finish, and “Kitty’s” expressive paces firmly held the spectators’ attention.

Marilyn and the now 10-year-old Oldenburg mare have forged an excellent partnership since last August when she purchased the mare from her previous amateur owner, who Marilyn credits with giving the horse a good base on the flat. Today they scored a 38.6 to lead before lunch, and no one in the afternoon group came close to catching them.

Marilyn said Kitty was very fresh today and probably the least attentive she’s been in a while, likely due to the chilly temperatures and buzzy atmosphere, but she was able to use that freshness to her advantage.

“The partnership is getting strong, so it’s getting easier and easier,” Marilyn said. “She was a lot more animated and had twice as much energy, but she kept it under wraps. She’s maturing, which is good to see.” 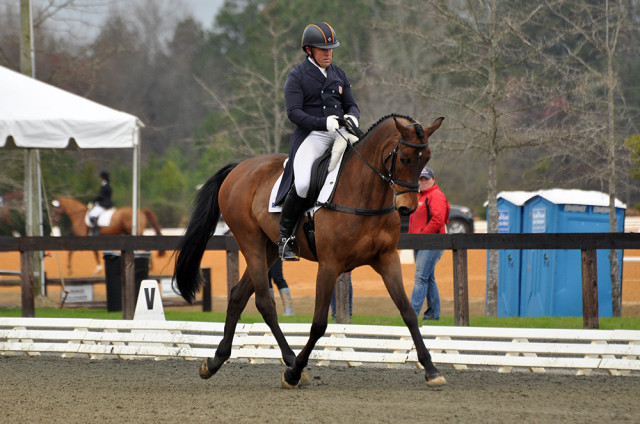 Buck Davidson and his relatively new ride Carlevo, an 8-year-old Holsteiner gelding owned by Carlevo LLC, scored a 41.6 to move into second place in the two-star.

“The best part is I haven’t had him very long, so I haven’t been able to mess him up,” Buck joked. “He knows what he’s doing. He’s quiet, he’s easy. I just steer him.”

An individual had approached Buck about owning an event horse for him, and Buck looked for nearly a year for the right horse. It was while Buck was on his way to his wedding last November that he got a call from JP Sheffield recommending a horse that had been produced to the two-star level with Dirk Schrade in Germany.

Buck called his vet, who reminded him to stop thinking about work and focus on his wife. He took that heart, but he still bought the horse on the advice of JP. Despite never sitting on the horse prior to purchase, the partnership is clearly coming together, as Buck and Carlevo finished fifth at the CIC1* in Ocala earlier this month.

Buck says Carlevo is the sweetest and quietest horse, which is evident during training at home, when he stands on a loose rein watching other horses gallop by. 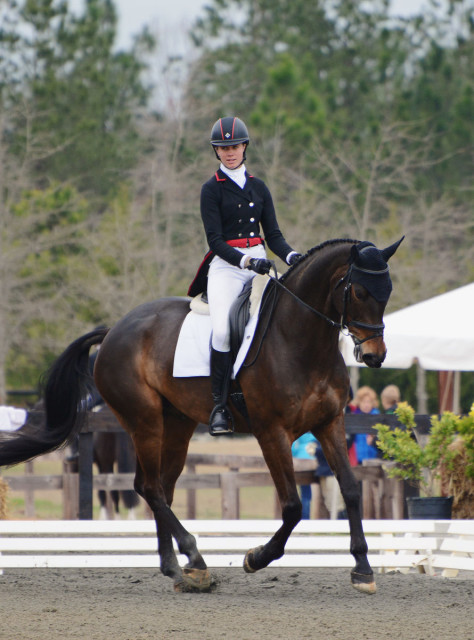 Rounding out the top three in the two-star on a 42.3 is 18-year-old Elena Hengel and Zipp, an 11-year-old KWPN-WB gelding. Coming out the ring, Elena knew it was nice but was did not expect to be placed so well. “My coach Becky said that it was good and we talked about my mistakes, but I didn’t think it would be anything that special,” Elena said.

Elena and Zipp represented Area IV at NAJYRC last year, finishing eighth individually in the CCI1*. They moved up to Intermediate a month ago and are aiming to return to Young Riders this year in the CCI2*.

Doug Payne and Lysander led the Southern Pines Equine Associates CIC1* with their score of 35.8 after an obedient, steady test. Then, with just five rides left in the division, Marilyn Little swooped in with Raylyn Farms’ RF West Indie and scored 34.9 to take the lead.

Doug has owned “Big Leo,” a now 8-year-old Thoroughbred/Holsteiner Doug owns with Kristin Michaloski, since the gelding was three. “He’s come a long way,” Doug said. “It was probably the steadiest test he’s had yet. I was able to go for it rather than making do. I was really proud of him in that way.”

Elizabeth Callahan bred the horse, and Doug has since bought several young horses from her, including a now 4-year-old and a yearling. He’s anticipating that he and his wife Jess will have the room at their new farm in Apex, North Carolina to buy multiple yearlings each year to raise and develop. 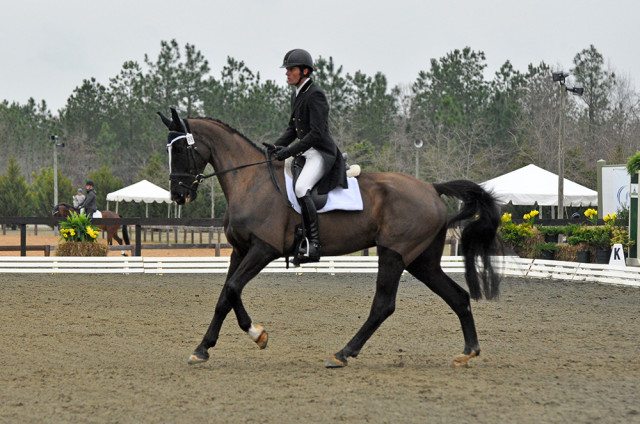 “It’s the only real answer to having a sustainable string,” Doug said. “The trick is if you buy them young and start the horses from the beginning, you know what you have. If I’ve got a world beating 3-year-old, I’m not going to sell it.”

Doug is also a member of the Carolina Horse Park organizing committee and has had a hand in creating this incredible competition.

“It would not be what it has been without the leadership of Jane Murray,” he said. “Last year was a great first attempt and hopefully everybody can see the continuous tweaking and improvements. The goal in the end is to be the premiere horse trials in the country. I think we’re well on our way to accomplishing that goal.”

In developing this event that caters to competitors, spectators, owners, media and sponsors alike, there is an active atmosphere to contend with.

“I think having the atmosphere is a great thing for horses long term and their development. It’s a very exciting competition to have and will pay dividends to horses for the future,” Doug said. 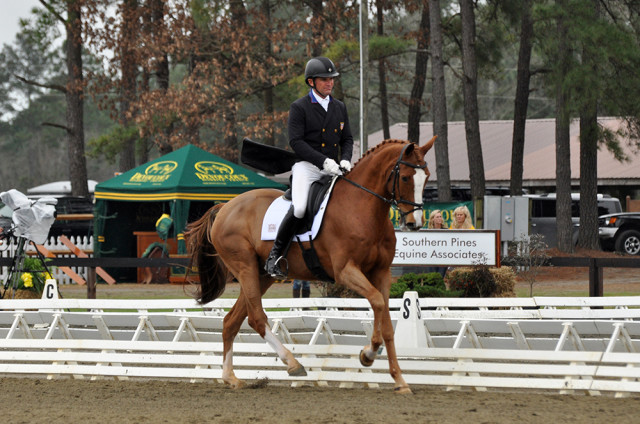 Unfortunately, not all horses managed the atmosphere — combined with cold and rain — as well as others. However, we have to give a huge shoutout to Will Coleman and Obos O’Reilly. They were the last ride in the CIC2* division and were putting in a stellar test when two helicopters flew very low and very loudly across the field and right above the arenas. Will managed Oboe’s reaction extremely well and they went on to complete a test that tied them for ninth on a 47.3.

Incidentally, “Oboe” tied with Phillip Dutton and Mr. Medicott, who strutted down the centerline for the first time since Rolex last year. “Cave” looked delighted to be back and his test was very good, save a bobble in the extended trot. Phillip also rode Mighty Nice in the two-star, who was making his return to competition for the first time since the WEG Prep Event last summer.

Despite the weather conditions, today was a great start to the competition. From the USEF Live Stream to the competitor’s lounge with snacks and beverages, and the lovely landscaping and small details that make all the difference, Carolina International 2015 is quickly making itself known as the place to be in March! 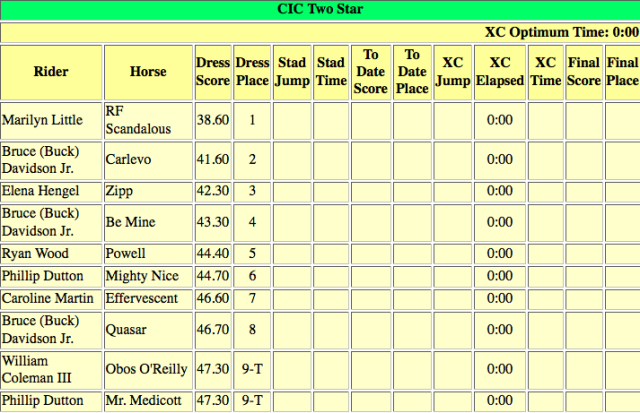 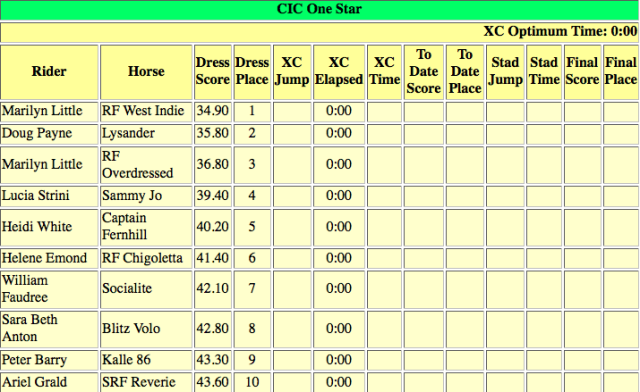