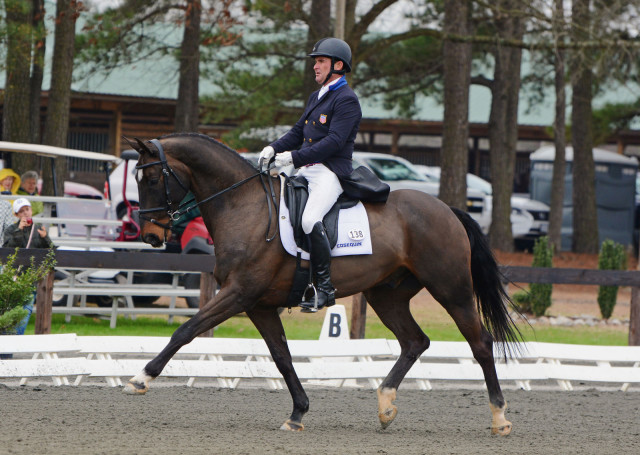 A star-studded afternoon group rose to the occasion in the little white box at the Cloud 11-Galivan North Carolina International to totally shake up the leaderboard in the Atwood Equestrian Surfaces CIC3*. Boyd Martin and Steve Blauner’s Master Frisky became the first combination to crack the 45 threshold, and Laine Ashker and Anthony Patch upped the ante even more by then delivering a 44.3.

But Phillip Dutton had the final say of the day, scoring 43.6 with John and Kristie Norton’s I’m Sew Ready to lead the division on 43.1 at the conclusion of dressage. Phillip has had the ride on “Jackson,” an 11-year-old Dutch gelding, since last summer, when Kristen Bond announced she and her husband, Andrew, were expecting their first child.

After welcoming a son, Beckham, in December, Kristen decided to have Phillip keep the ride a bit longer while she settles into motherhood, and Phillip said he’s pleased with how their partnership has progressed, with the payout being the overnight lead. And if you’re wondering about the origin of his name, it has to do with his owner Kristie’s affinity for sewing.

“He’s a big mover, and he’s pretty educated in all the movements. Kristen has done a good job there,” Phillip said. With so many rides today, Phillip said he didn’t have time to ride Jackson this morning, so he focused on a longer warmup instead in preparing for the test, which proved to be very beneficial. 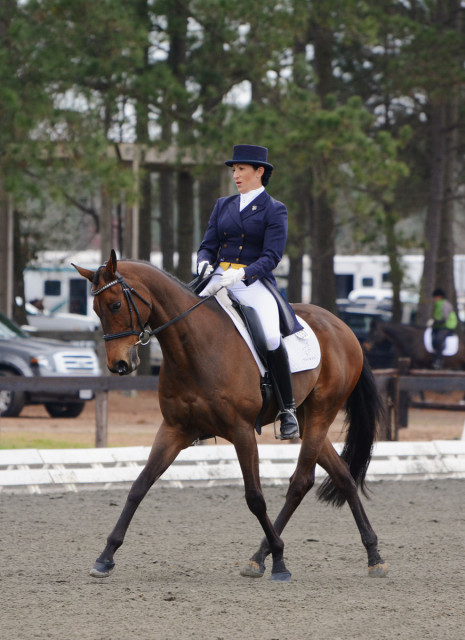 “I got on him for nearly an hour today, and I think it helps a bit to have plenty of time to not rush the warmup and let him loosen up. I was pleased. … He’s good in the ring. He’s a quiet horse; he doesn’t get nervous.” Phillip said the goal has been to keep him very round and through in his tests: “To get him to do the movements and keep using himself and staying soft is what we’ve been working on.”

This is the horse’s third CIC3*, having finished fourth at Arville in Belgium in 2013 with his former rider, Great Britain’s Emma Forsyth, in the irons. Phillip and Jackson finished 37th in the big CIC3* class at Plantation Field last fall, and Phillip said he plans to aim the horse for the three-star at Jersey Fresh and ultimately as a prospect for the U.S. Pan American Games team.

Laine and Anthony Patch delivered the consistent performance we’ve come go expect from them and then some, with the 16-year-old off-track Thoroughbred gelding turning on the charm today for a score of 44.3 for second place. Lainey spent spent the past weekend honing her dressage skills with Jacquie Brooks and competing in Wellington, which she said was immensely helpful.

“He always puts in a pretty steady test, and what I lack a lot is the brilliance in the test, which is what I need to take into Kentucky, so that’s what I was focusing on,” Lainey said. “Al” is aiming for his fourth start at Rolex, and Lainey confirmed Carolina will be his only prep run for the event, as he already competed in the $50,000 Wellington Eventing Showcase in January and the $15,000 Eventing Prix Invitational in Ocala earlier this month. 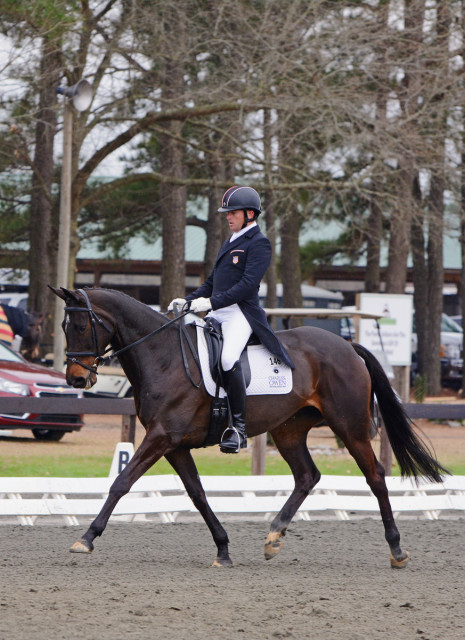 Boyd Martin and Master Frisky put in a very solid test on a day when the chilly weather and atmosphere had many horses thinking more about heading for the hills than getting to work in the little white box. “Mikey,” and 11-year-old Irish Sport Horse gelding, scored 45.6 to sit in third place. “He’s a very, very nice mover and a great cross country horse, and the show jumping’s always improving, so I was very pleased with his test,” Boyd said.

The horse will go on to The Fork and then tackle his first CCI4* at Kentucky if all goes according to plan. After finishing in second place last fall in the Dutta Corp Fair Hill International CCI3*, Mikey is well positioned for a good finish this weekend, though Boyd said he’s not counting his chickens before they hatch when considering his somewhat tenuous relationship with Carolina.

“I’m always nervous coming here because I’ve broken my leg two times two years in a row. The first year I was on a scooter on the way home from the (competitor’s) party, and the second time was at a corner (on cross country), so my wife is a bit nervous about me being here this weekend,” Boyd joked.

The organizers have rolled out the red carpet (literally) at this year’s event, and Boyd said it’s fantastic to see all the hard work of the organizing committee come to fruition. “Every year it’s getting better; the live stream is a big deal this year,” Boyd said. “I hear the course is pretty inviting. I think a bit of rain tonight should soften up the turf and give the horses a good run and prepare them well for where they’re heading for their spring three-day events.” 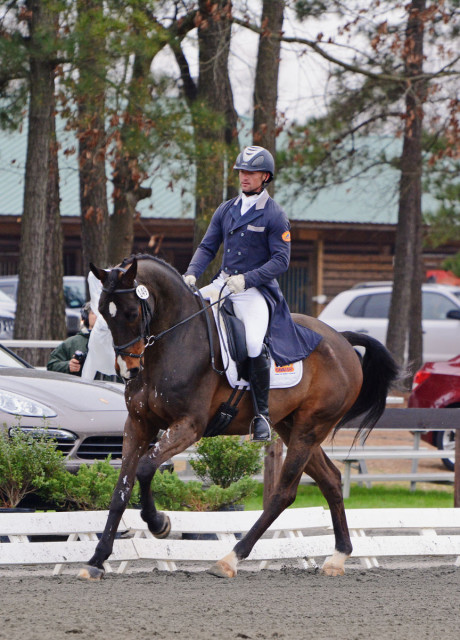 In other notable tests from the afternoon group, Jennifer Mosing’s Andromaque made a lovely return to FEI competition with Will Faudree in the irons to score 47.2 for fifth place, which slots them just behind morning leaders Liz Halliday-Sharp and Fernhill By Night. “Missie,” a 14-year-old Irish Sport Horse mare, last ran a CIC3* at The Fork last year, and it’s great to see her back out.

Michael Pollard and Cyrano were the only other pair to crack the top 10 in the afternoon group, scoring 48.8 for ninth place. This horse, a 14-year-old Zangersheide gelding owned by Carl Bouckaert, has a fantastic presence in the ring, and while the atmosphere got to him a bit toward the end of the test, Michael was able to handle him well for a competitive score.

Be sure to click here for a full recap of the morning’s CIC3* tests. At the end of the day, the rest of your top 10, who all competed before the lunch break, are: Marilyn Little and RF Demeter, 47.6, sixth place; Allison Springer and Arthur, 48.3, seventh place; and three-star first-timer Meadowbrook’s Scarlett with Lauren Kieffer, 49.2, 10th place.

Those of you who followed along with the USEF Network’s live stream were treated to impressive performances and fantastic commentary from Karen O’Connor and Charlotte Skinner-Robson, and if you missed watching the action, don’t despair! The CIC3* rides are available on demand at this link, and the CIC3* and CIC2* show jumping will air tomorrow. Click here to view the full live stream schedule.

Thank you to the volunteers, organizers and everyone working hard behind the scenes to keep things running smoothly on a chilly, damp day. The fantastic beer on tap at this afternoon’s competitor’s reception, courtesy of Southern Pines Brewing Company, certainly helped everyone thaw out. Stay tuned for much more from Carolina International. Go Eventing. 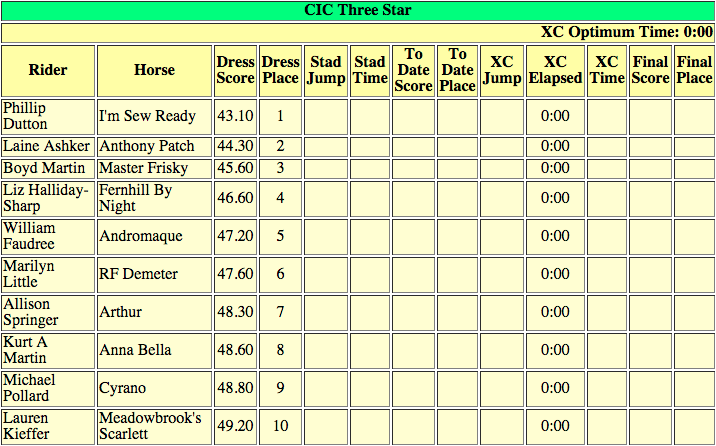