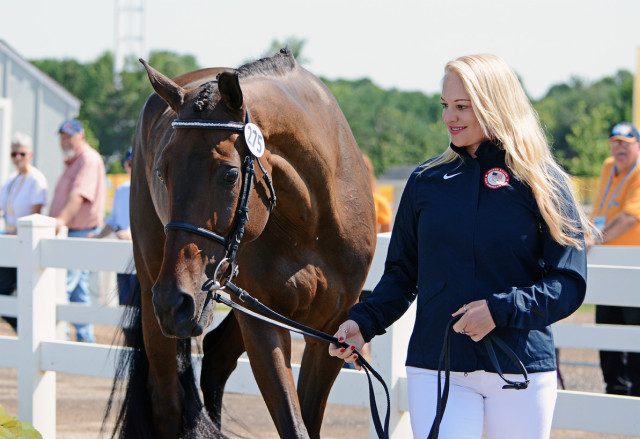 US Equestrian announced this morning that Marilyn Little has withdrawn RF Scandalous from the 2018 World Equestrian Games due to a minor injury sustained during training. Reserves Will Coleman and Tight Lines will now step in for Team USA.

“It is with a heavy heart  and through endless tears that I am announcing that RF Scandalous and I won’t be competing at the World Equestrian Games (WEG) this week in Tryon. Scandalous has been going absolutely amazing during the final training camp in preparation for WEG. Following my final ride yesterday, she showed mild inflammation in her lower limb.

“While the prognosis for Kitty is excellent, under guidance from the U.S. team veterinarian and in the best interest of my lovely mare, I have made the decision to withdraw Kitty and not move forward with competing this week. To say that I’m devastated would be an understatement. I am grateful for my owners, Jacqueline Mars, Phoebe and Mike Manders, as well as my entire team for supporting my decision during this very difficult time. As athletes, we commit our lives to our sport. Kitty is my best friend and my teammate. For us to not be able to perform at this  year’s biggest global competition after all of the endless hours of preparation is heartbreaking.

“Not only was I looking forward to competing alongside my teammates but it was even more special to represent  my country in the US. I am committed to making sure that Kitty is back to herself, and I am looking forward  to returning to the international eventing scene. In the meantime, I will continue to cheer for team USA, and know  my replacement Will Coleman is fully prepared to step in.”

Competition at the 2018 World Equestrian Games Begins for the team Wednesday with the first horse inspection at the Tryon International Equestrian Center in Mill Spring, N.C. Keep it locked on EN for all the latest and greatest from WEG.