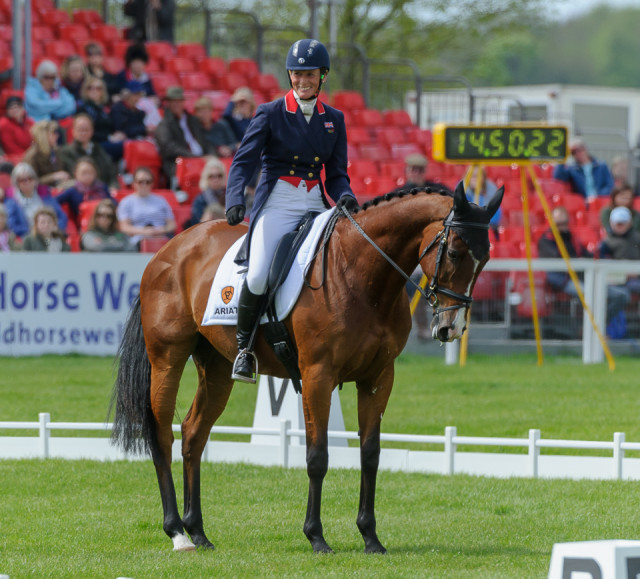 After withdrawing her homebred 15-year-old mare, King’s Temptress, following the dressage at Badminton last month, Mary King has announced that she will be retiring “Tess” due to arthritic changes and persistent lameness.

“Sadly Tess’s lameness has persisted and due to some arthritic changes we have had to retire her from competition,” Mary wrote on her Facebook page. “She is going to now have babies and get fat! (what she has always wanted!) In the past she has had 5 successful embryo transfers and I have been advised this time to let her have her own baby. She will be AI’d next week…husband yet to be decided!”

King’s Temptress enjoyed a storied career with Mary in the irons, winning Rolex in 2011, the year that Mary finished first and second aboard Tess and Fernhill Urco. The mare finished fourth in her CCI4* debut at Luhmühlen in 2009 and completed Burghley three times, finishing 18th, seventh, and third each time.

Mary has been well-known for piloting horses she bred herself to the upper levels of the sport, so we’re waiting anxiously to see what stallion will pair with King’s Temptress to produce the next generation of eventers. We’ll post more updates on this as they become available.