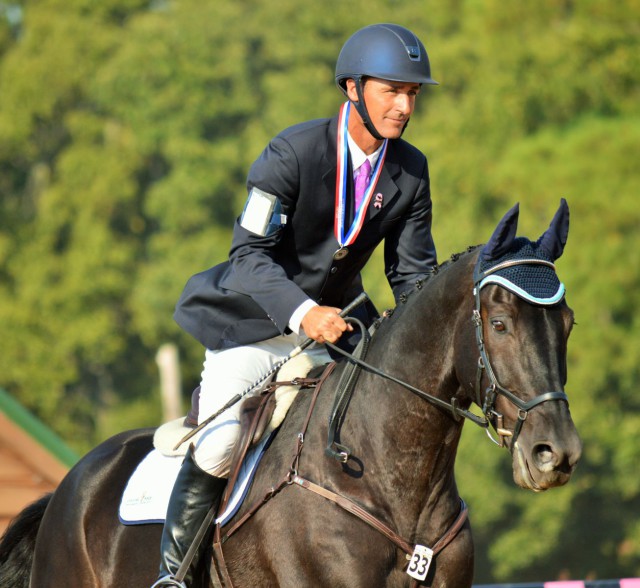 Matt Brown’s determination is evident when he outlines his plans and goals for next season as he looks back on what can only be called a successful 2014 campaign. Holding onto a childhood dream of representing the U.S. on the Olympic team, he’s put his nose to the grindstone as he hammers away at turning his dream into a reality.

And he is closer than he has ever been, adding a spot on the 2015 High Performance Training List and two training grants to his growing list of achievements. Now, he’s planning ahead as the Pan American Games in Toronto and, ultimately, the 2016 Summer Olympic Games in Rio de Janeiro loom closer.

“This year was great,” Matt said. “There’s not a whole lot to be disappointed about. I think there are a couple results that I know could have been better, but my horses have all come through much improved and primed to pick up where we left off next year, and I’ll call that a great success.”

Matt stepped out of his comfort zone this season, making the trek from his home base in California to compete two of his top horses, Super Socks BCF and Happenstance, at the Nutrena American Eventing Championships, as well as Fair Hill in the fall.

After picking up a sixth place finish in the Merial Open Intermediate division and third placed in the Advanced Gold Cup Final at the AECs, Matt received a Jacqueline B. Mars Grant to compete at the Dutta Corp Fair Hill International, where he ran Happenstance in the CCI2* and Super Socks BCF in the CCI3*.

Matt made the long drive home from the East Coast with his ultimate goal accomplished — a solid completion with both horses at Fair Hill. “Both of the horses were awesome. I couldn’t have asked for anything more from them,” he said. “Happenstance was in winning form in the two-star, and I made a mistake on cross country.

“I think the adjustment from the West Coast to the East Coast with its narrower galloping lanes and trees made me realize the importance of getting out of your comfort zone and learning to compete at other events. I had to adjust my ride at Fair Hill, and I just didn’t get his eye on the fence. But overall, I felt he was in better form than at Rebecca Farm, where he won. He was just spot on the entire weekend.”

Super Socks BCF also stepped up and showed his grit over a grueling CCI3* course designed by Matt’s longtime mentor, Derek di Grazia. “He just ate up the cross country, and I was happy to see that our fitness program was where it needed to be. We don’t have the same conditioning environment in California; we have good beaches for galloping long distances, but not much for hills,” Matt said.

“But after talking with Bobby Meyerhoff, who just moved out here from the East Coast, I found a hill as close as I could to Nelson’s Hill and was pleased to find that my horses galloped up the real Nelson’s Hill just fine when we arrived.” 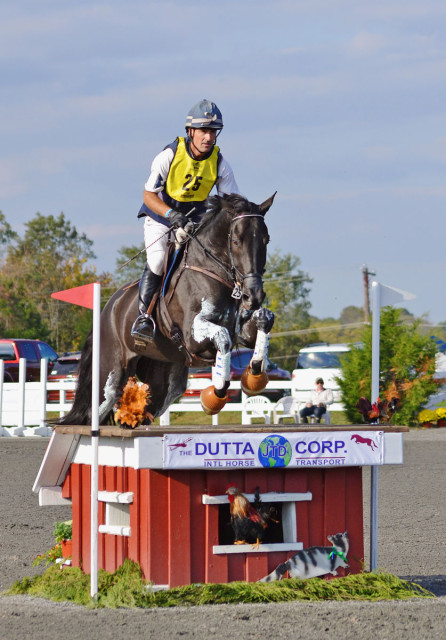 So what’s next as Matt looks ahead to a new season? “With the Pan American Games approaching, that’s really on my radar. I’m actually very glad they’re this year, because I think Happenstance, and hopefully all three of them, could easily be a winning horse. Judging from how he finished the season, I think he’ll definitely be a contender if I can keep him going where he was at the end of this year.”

Now that the pressure is solidly on America’s shoulders to secure an Olympic spot with a win in Toronto, Matt knows he has his work cut out for him. “The Olympic goal is what has been driving us. When (Blossom Creek Foundation owners Bob and Valerie Fish) and I went to Europe to buy these horses, that was always our goal,” Matt said.

“Bea di Grazia was actually one of the first to really put me on the right path. Being experienced in a team environment is a big factor for being selected for the Olympic team, so you have to prove you can play at that level. Bea really emphasized that the Pan Ams were a stepping stone for that goal, to really get you into the team mentality. It’s always a long shot when only four people are picked for the team, but I think it would be a step in the right direction.

“We need to prove that we can play, and if we don’t get to do it on the Pan Am team, then I’ll prove it elsewhere, on championship courses or overseas; I will prove it however I can.“ 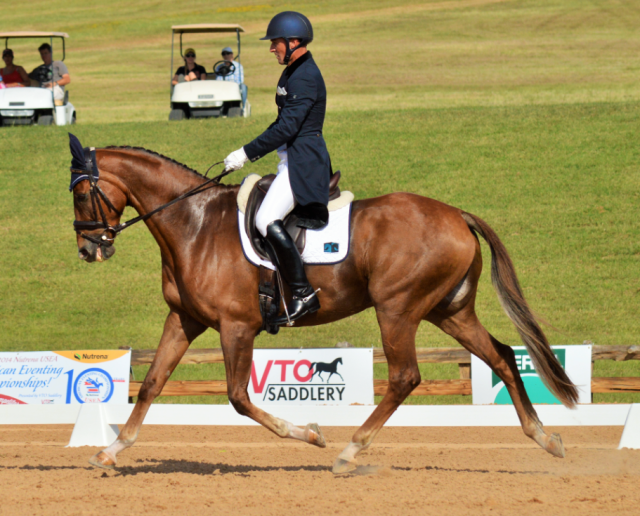 Matt Brown and Super Socks BCF at the AECs. Photo by Sally Spickard.

Matt found out at the USEA Annual Meeting & Convention in Fort Worth, Texas, earlier this month that he was the recipient of the Rebecca Broussard Developing International Rider Grant, which will give him $30,000 to compete internationally. He’s tapping Super Socks BCF to make the trip, although the plans are still in the works as to which event to target.

“I’d like to take him to England, and I’d love to get on the Aachen team if we get invited,” Matt said. “So there’s that potential, or there’s also Blenheim or Boekelo; it just sort of depends on how the Pan Ams are looking and how our season is unfolding.”

Matt was also named to the National High Performance Training List. “It’s nice to be included. So much of your time is spent on your own, with your individual horse, and when you get named to a list like that, you just feel like you’re being recognized. The fact that they put me on there, when there are so many great riders in this country, just blew me away. It’s truly an honor,” Matt said.

“I’m looking forward to having more time with David. As an invitee to the sessions last year, I got to experience training with David, and he’s already got more sessions for the West Coast planned, so I’m thrilled to have the opportunity to build on what we’ve worked on before.

“I’m also really happy that Leslie (Law) was named as the Developing Rider coach. I think he’s absolutely the perfect person for the job, and we now have two coaches who have lived at the top of the sport. To have that continued guidance is so instrumental, and I’m hoping to be able to sneak in some lessons with Leslie as well this year.

“I like to have a lot of feedback from those who have created their own path to success, because it helps me formulate my plans. I think after Fair Hill and receiving the grants and the training sessions, the work really began. It was like, ‘Well, now I have a real horse, so now I need to put my nose to the grindstone.'” 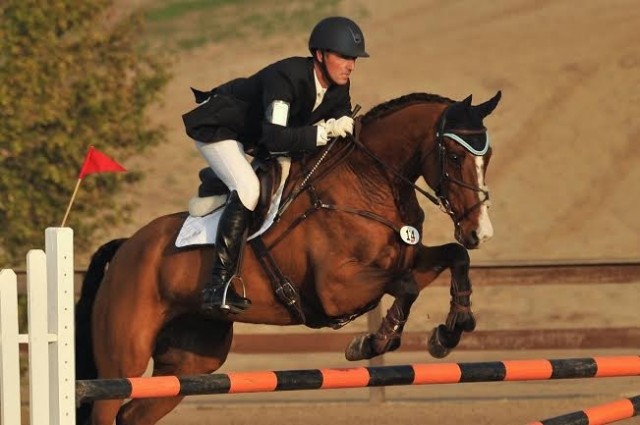 Matt and his wife, Cecily, run East West Training Stables out of Petaluma, California, in addition to supporting three horses with the potential to compete internationally. Super Socks BCF and BCF Belicoso, owned by the Bob and Valerie Fish’s Blossom Creek Foundation, as well as Mary McKee’s Happenstance are all knocking on the door of the upper level spotlight, which is a juggling act Matt is happy to take on.

“It’s a struggle. To support three incredible horses with planning their conditioning and competitions, while also making sure our business at home is bringing in the income we rely on is difficult,” Matt said. “I’m fortunate to have some very supportive owners who have made these things possible, but we’re all still on a learning curve.”

When asked about the biggest challenge at this point is his career, Matt’s emphatic answer was time. “It’s quite difficult to compete one, let alone hopefully three, horses at the three-star level. To maintain a business adds more constraints on the scheduling, as I can’t just pack up and leave for six months,” he said.

“It’s a balancing act, and it’s one I’m still working on improving. My hope is that with this next season we can really get more experience with planning and budgeting and learn the strategy of competing and being a professional at the same time.”

So what is it that drives Matt and Cecily to overcome the challenges? “The biggest thing that continues to be unique to me about this sport is that it requires passion. It doesn’t matter how many horses you’re sponsored to ride or how many owners you have; if you don’t have a passion for the horses and the sport, you won’t make it,” he said.

“Honestly, I got very pessimistic when I was younger, and I kept saying I’d never make it because I didn’t have the money. You have to make a lot of sacrifices. It kept me out of the game for quite awhile, until I met Bob and Valerie, who really helped teach me that if you are positive and talk about your goals, people are going to want to support you. Whether or not it’s financial support, you have people behind you who make you realize that maybe this is a possibility.”

As Matt and Cecily plan for the upcoming year, finances will play a big part in their decision making. “We’ll probably have a winter fundraiser, and depending on how successful that is, we’ll plan out the competition season. Ideally, all three horses will be going three-star at some point this year, but whether we stay in California or go east or overseas will depend a lot on financials,” he said.

“With our business at home, we have to be careful not to lose too much income from being away. The cost of our trip east this year ended up being more than we thought in income lost, so we’ll have to make a plan to have things taken care of so that I can compete this year. The great thing about the (Rebecca Broussard) grant is that it helps riders achieve their goals of going overseas, and we definitely wanted to make that trip happen. This grant just makes a huge difference and really makes it a reality for us.” 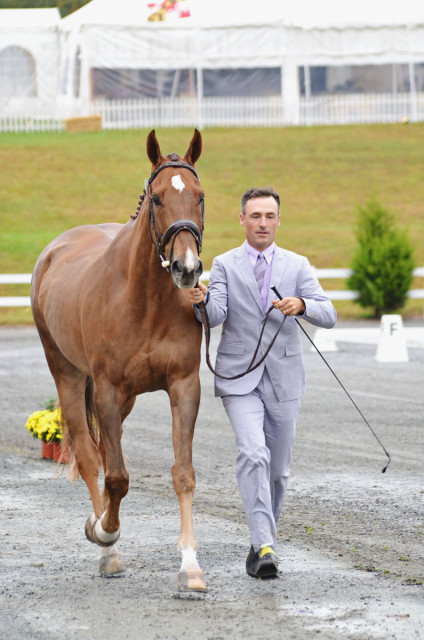 Do All Roads Lead to Kentucky?

After Fair Hill, Matt officially qualified to contest his first CCI4* with Super Socks BCF. Naturally, the question arose as to whether or not Rolex is in this pair’s future. “It’s so great to even be qualified,” he said. “But in speaking with many who have been around the four-star courses, we agreed that a 9-year-old horse with one CCI3* under his belt isn’t in the best position to move up,” he said.

“I’d like to get a couple more three-stars done before we start thinking about four-star. Once he’s feeling confident at that level, then we’ll go ahead and tackle our first four-star. So with that said, our goal for 2016 is Rolex and, ultimately, the Olympics.”

Matt put his name on the map with consistent performances in 2014. As his string of talented horses continues to improve, Matt’s ultimate goal of competing on the Olympic stage inches closer to becoming a reality. With all of the support behind him, he’s out to prove he can compete with the best as he sets himself up for success in the new year.

We wish Matt the best of luck with all of his endeavors, and he’s also kindly agree to blog for EN throughout the off season, so stay tuned for much more!