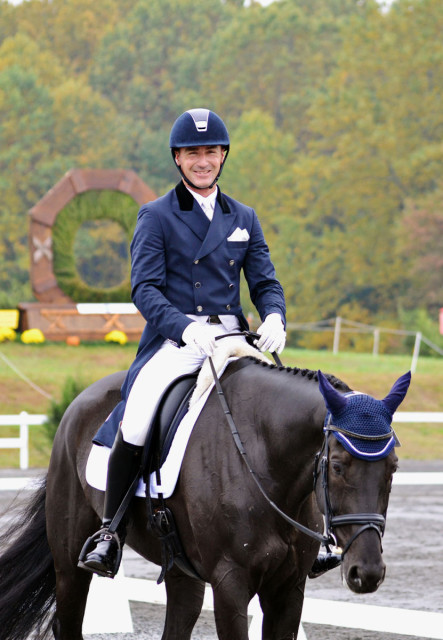 California is in the house today at the Dutta Corp Fair Hill International, with Matt Brown and Happenstance scoring 40.1 to handily lead the CCI2* at the lunch break. That’s the horse’s personal best dressage score, having scored 43.8 at the Event at Rebecca Farm in his first CCI2* this summer, and Matt said he thought it was one of Hap’s best tests to date.

“Sometimes you feel like you have a good test, and the score doesn’t reflect it, but that’s not the case today,” Matt said. “It’s especially exciting because I think he has a lot more in him. For a young horse at only 8, he has a lot more developing to do in this phase, but for where he’s at right now, I’m very happy.”

Matt, who’s based in Petaluma, Calif., with his wife Cecily, has gone cross country on Maryland’s hills once before during a working student stint with Denny Emerson in the 1990s, and he’s returned for the first time since to contest the CCI2* with Hap, an 8-year-old Holsteiner gelding, and the CCI3* with Super Socks BCF. Though Hap is no stranger to the CCI2* level, having won at Rebecca this summer, Fair Hill will be a very different experience for him.

“I honestly think that he’ll be great,” Matt said. “The hills are a little bit new to him. He’s California bred, so the mud will also be new to him. I’ll have to feel him out in the first part of the course. I have no question about this horse’s ability on cross country; he’s a machine out there. So it’s really about getting to know the footing. I believe in this horse.”

The CCI2* ground jury of Jane Tolley and Mark Weissbecker certainly liked what they saw in Boyd Martin’s test with SBF Cortez, a 7-year-old Oldenburg/Thoroughbred cross gelding owned by Denise Lahey. Their score of 43.8 puts them securely in second place at the lunch break, easily besting their previous two scores in the 50s on this test.

Will Faudree and Caeleste rose to the occasion for a lovely, elastic test in the mare’s first CCI2*. The 7-year-old German Sporthorse mare owned by Jennifer Mosing joined Will’s program earlier this year after campaigning in England at the one-star level with Kitty King, and their partnership has been building nicely.

“Mouse” stepped up to Intermediate in August at Fair Hill, finished 3rd in the Poplar Place CIC2* later that month and then placed 2nd in the big CIC2* class at Plantation Field. While she’s green to the level, Will refers to her as a little pocket rocket, and she’s definitely one to watch this weekend.

Jon Holling and Kildalton Cooley are enjoying a comfortable spot on the leaderboard in fourth place on 45.9 in the horse’s first CCI2*. An 8-yearold Irish Sport Horse gelding owned by the Kildalton Group, Jon and Elissa Gibbs have both competed the horse this year, with Jon moving him up to Intermediate at Chatt Hills in May.

He did his first CIC2* at Richland Park, finishing 20th, and was 8th in the Poplar Place CIC2* last month before heading to the American Eventing Championships, where he picked up the only 20 on his record in the Merial Open Intermediate division. Definitely a horse we’re excited to watch this weekend with Jon in the irons.

Marilyn Little and RF West Indie round out the top five, with a very nice test thwarted a bit by the fact that they were first out this morning. The score of 49.0 would have been a few marks lower had they enjoyed the advantage of going when the ground jury had a few more cups of coffee in their bellies, but that’s the luck of the draw.

We have to give a huge shoutout to EN’s own Maggie Deatrick and Divine Comedy, who threw down with a lovely, relaxed test to score 52.2 for eighth place. That bests their CCI2* score from last year by 23.1! If you’ve been following along with Maggie’s Fair Hill blogs, you know Dante spent the summer in dressage bootcamp with Lauren Sprieser, and it sure paid off.

We’re on the lunch break now, with Kelly Prather and Blackfoot Mystery leading off at 1:15 p.m. Remember they won the dressage in the big CIC3* class at Plantation Field, and we have a slew of other talented dressage combinations slated to come this afternoon. Be sure to follow EN on Twitter for live updates throughout the day, and keep checking back for much more. And check out the cool slow-mo video below of Matt and Hap taken by Alec Thayer: 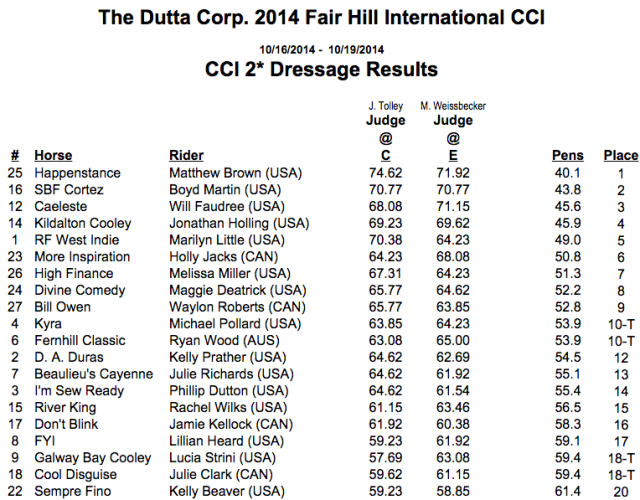