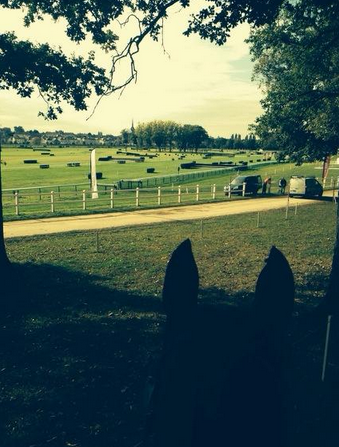 Between the ears of Cooley Ground Control at Mondial du Lion. Photo via Liz Halliday-Sharp on Twitter.

Let’s just take a moment and talk about Michael Jung and the fact that he has a full sister to WEG silver medalist fischerRocana FST competing at Mondial du Lion this weekend. This mare is seven years old, just two years younger than her superstar of a sister.

fischerRicona’s record is already impressive; this year, she’s won three times at the CIC2* and CIC3* level and is most recently coming off of a fourth place finish in the CIC2* at Langenhagen.

Michael doesn’t have much in the way of breathing room, however, as Maxime Livio and RNH McUstinov have slotted into second place on a score of 44.6. Pawel Spisak and Banderas hold third place overnight on a 45.4.

Roughly half of both the six and seven-year-old divisions have completed dressage, with many more heavy hitters still to come tomorrow.

In the six-year-old division, a CCI* competition, Zoe Wilkinson and Parkfield Quintessential are in the overnight lead on a score of 46.7, followed by Piggy French and Cooley Dream Extreme on a 47.1.

Parkfield Quintessential is coming off a third place finish in the British Young Event Horse Championships, a CIC*, earlier this month. Zoe has produced this horse since 2012, bringing him up through the levels with several wins at the one-star and Novice levels.

Boekelo winner Thomas Carlile and Upsilon are in third place on a 47.7, followed by Canadian rider Lindsay Traisnel and Ulysse de Rubercy. Their score of 48.8 is the best they’ve scored in FEI competition to date, improving on their previous score by 6.6 points.

Elizabeth Halliday-Sharp and Cooley Ground Control competed today as well, scoring a 61.5 for 19th place overnight. This is a talented young Irish Sport Horse who has numerous top-10 placings on his record already. Their highest FEI placing to date is a win in the CIC* at Cappoquin in July, and this is Cooley Ground Control’s sixth FEI appearance.

Stay tuned for much more from Mondial du Lion. 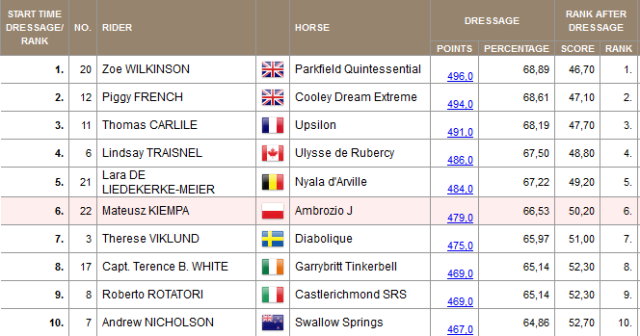