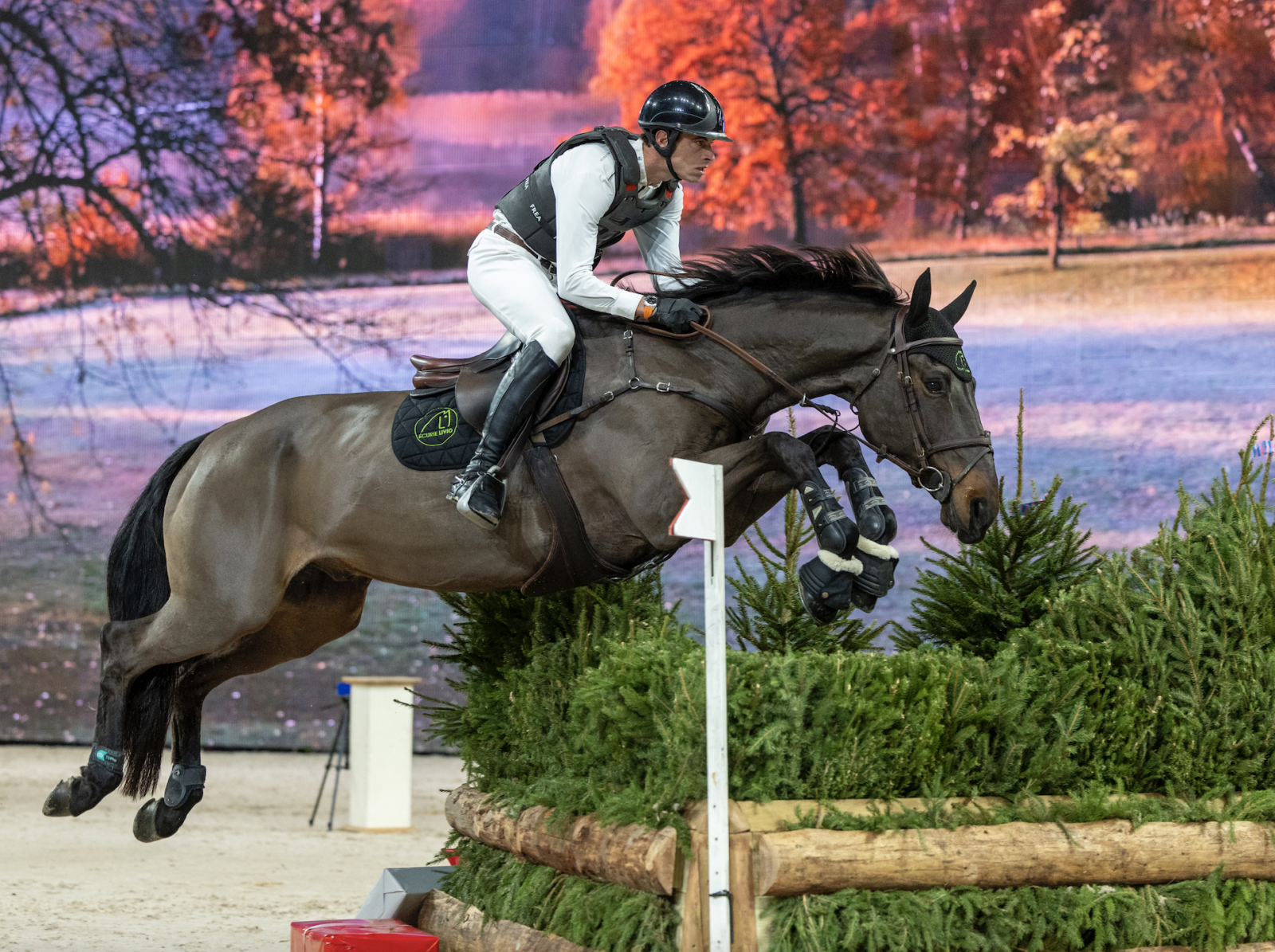 Maxime Livio and Boleybawn Prince lead the way on a scorching time of 30.92. Photo by Roland Thunholm/SIHS.

France’s Maxime Livio and Boleybawn Prince were the best combination in the first class of the Agria Top 10 Indoor Eventing in Stockholm, Sweden, last night. This means they will go last in the final on Sunday.

Livio was very pleased with his horse after the ride: “He is just an amazing horse,” he says. “He did Boekelo when he was eight with the German team. I’m training the Thailand eventing team and now he belongs to one of my Thai riders. He’s 17 now and still loves to compete. We train him for these competitions because they are not so physically demanding — he can just have big fun and feel the atmosphere of the big shows. I’m very lucky to have this horse and I’m very thankful to his owners who let me ride him.”

On indoor eventing, which takes place at many of the big winter indoor competitions, Maxime remarks, “I think it’s really good with the indoor shows because we can promote our sport and it’s helpful for us to have competitions during the winter season. I also think the audience loves to see these competitions, there is always a very good atmosphere.”

But, he points out: “It’s important though to have specific horses for this kind of classes. They need to be fast, but very connected and listening to the rider. They also have to be experienced, because everything comes very quickly.” 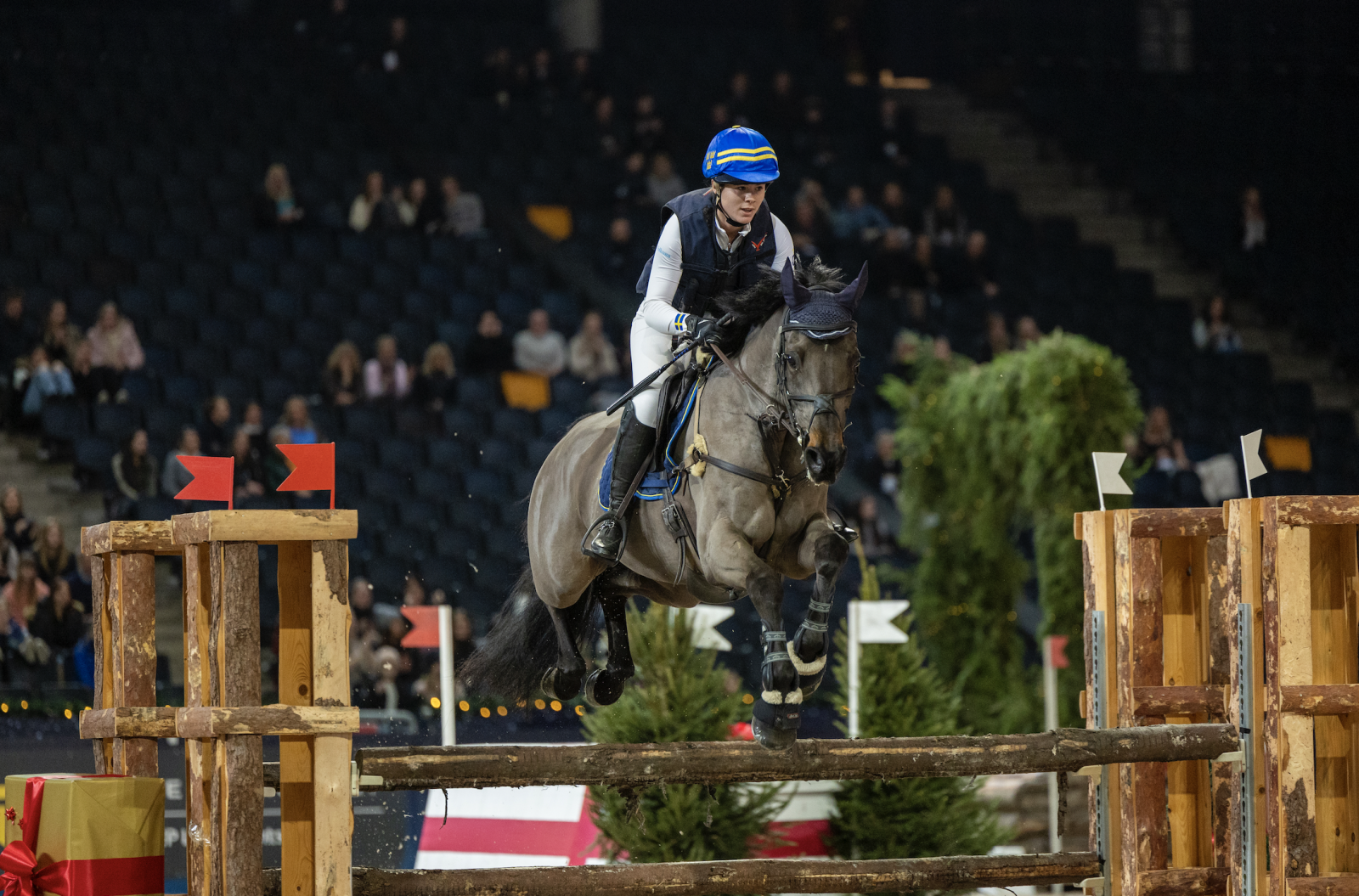 Sofia Sjoborg and Eastbourne are the best of the formidable home side in round one. Photo by Roland Thunholm/SIHS.

Sunday will see the finale of the class play out, run in reverse order of merit — and so Maxime will be the last rider to enter the ring, following joint-second placed competitors Sofia Sjoborg, piloting Eastbourne for the home nation, and Denmark’s Peter Flarup, riding his top horse Fascination.

“It will be the first time we do two fast classes during a competition,” says Maxime. “I think I will just have to manage my horse a little bit, because he will probably want to go too quick. I’m happy to be at the end of the order, that means I will have some answers about the course. And I will know who’s in the lead and what kind of risk they took.”

The ten-strong class saw plenty of drama and excitement, including a shock elimination for Oliver Townend after a spooky round with catch-ride Sotomayor resulted in the gelding jumping onto the bounce bank on a half-stride, refusing on top, and then slipping backwards off the side of the bank. Both were totally unharmed and landed on their feet. US representative Boyd Martin sits fifth currently on catch ride Caruccio Paradise, just a fraction of a second behind Germany’s Anna Siemer and the excellent eight-year-old Lillybelle EA, while Olympic champion Julia Krajewski sits sixth after the first round with the exciting eight-year-old Nickel 21.

You can rewatch the class on Horse&CountryTV here, and for full results, click here.