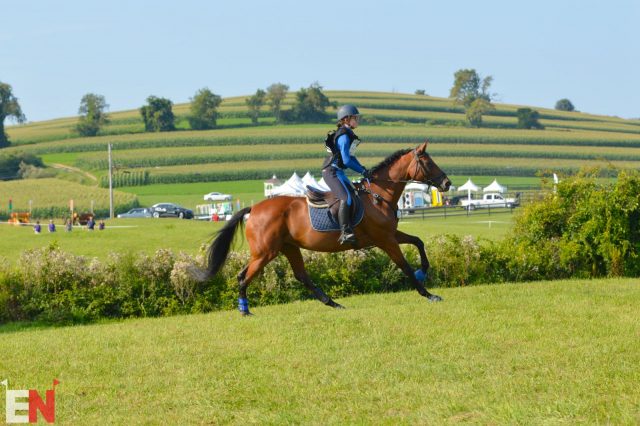 Millbrook couldn’t be more picturesque if it tried! Photo by Abby Powell.

Telltale white tents line the distinctive striped cornfield landscape of Dutchess County. It can only mean one thing: Millbrook Horse Trials, one of Area I’s biggest events — and the only one offering an Advanced level horse trials — is back in action. The event, which takes place on the beautiful Riga Meadow at Coole Park Farm property is welcoming competitors back to Amenia, New York for its 20th anniversary.

Competition officially kicked off on Thursday with many Beginner Novice, Novice, and Training level competitors riding their dressage tests. Friday’s schedule consisted of the completion of the dressage phase from Novice through Advanced competitors, and the beginning of cross country for Beginner Novice through Training divisions. Get a taste of the event’s atmosphere on Thursday and Friday with these gorgeous videos shot and produced by local videographer Marion de Vogel:

Like so many other venues and organizations, Millbrook is getting back into the swing of things after last year’s hiatus and is happy to welcome the eventing community back. The gap year did, however, make it a little bit more difficult than one might think to simply pick up where everything left off in 2019.

“It is great to be back, but it’s amazing how much harder it is after missing a year,” board member and organizing committee member Louise Meryman told EN. “Some people dropped off, new people came in and people need time to learn the ropes. Cross country jumps rot in two years. And everybody just got a little bit out of the swing of it. But we are really enjoying having people back together and doing it all together.”

Whether it’s due to a hesitancy to travel because of COVID, a conflict with the Olympics for a few top riders, or a packed weekend on the eventing calendar this year; Millbrook’s 2021 entry list is a bit shorter than it has been in previous runnings, which has frequently been near capacity at 450 pairs.

While the stables may not be quite as full as previous years, it’s the sudden and sad loss of long-time course designer Tremaine Cooper this past March that is the biggest blow and cause for emptiness at this year’s horse trials, though his presence is still felt throughout the venue.

“He’s everywhere here,” said Louise, who has known Tremaine since becoming involved with the Millbrook Horse Trials in the 1980s. As Louise’s daughter’s godfather, Tremaine was a member of her family.

In order to carry on with this year’s event, Louise reached out to many of the builders and course designers that Tremaine had mentored over the years who had worked with him at Millbrook: “I pled with them to please come and help us be able to carry on this year and to put his stamp on it. And just, you know, honor what he did.”

Despite already having a full calendar, including taking on much of Tremaine’s other work, course designer Morgan Roswell answered the call along with course builders Jamie Gornall and Tyson Rementer.

“I was really grateful that Morgan agreed to do it because we needed somebody with the great credentials and we wanted somebody that was mentored by Tremaine,” said Louise. “I like the stuff he’s done and he’s incorporated Tremaine’s jumps and he’s built a few more, but basically it’s the old tracks and the jumps  but in a new way that has his stamp.”

With some desperately sad times in the rearview mirror, yet not forgotten, Millbrook Horse Trials is looking forward to introducing some exciting and long planned-for changes within the coming years. A capital campaign is in the works which will serve to raise money to redo the property’s infrastructure, including the building of brand new rings with state of the art footing, as well as a resign of the site to incorporate a country fair feel for the vendor area. The site plan was previously developed by Tremaine and Louise, and has recently received the blessing of Captain Mark Phillips.

“I just I want everybody to know that there are good things in the works,” said Louise. 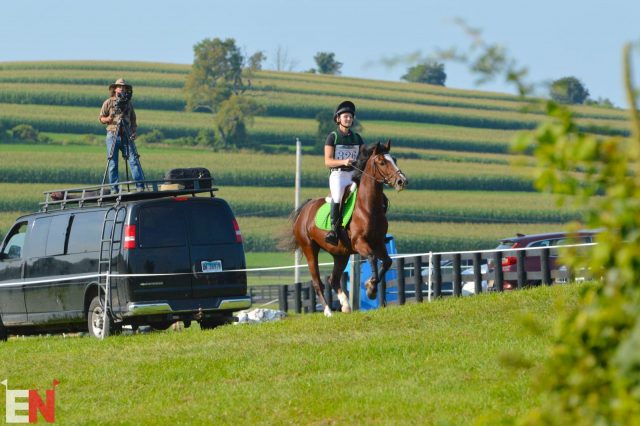 RNS Videomedia is on site and recording all cross country rides. Photo by Abby Powell.

Tomorrow’s schedule consists of cross country for the Preliminary, Intermediate, and Advanced divisions and we’ll be back tomorrow evening with a breakdown of the upper-level action and a photo gallery.