Hat tip to our friends at Uptown Eventing for spotting that Michael Jung has purchased the 2-year-old stallion Mighty Anakonda, seen in the video above, from the Hanoverian stallion licensing and sales held last month in Germany. So let’s get to know the horse he’ll be beating everyone with in a few years.

Bred by Katharina Tietz, Mighty Anakonda is by the Holsteiner stallion Mighty Magic and out of the Hanoverian mare Anakonda, by Sir Shostakovich xx, giving him some serious bloodlines for eventing, with Heraldik and Star Regent peppered in too. Here’s a look at the breeding via Sporthorse Data: 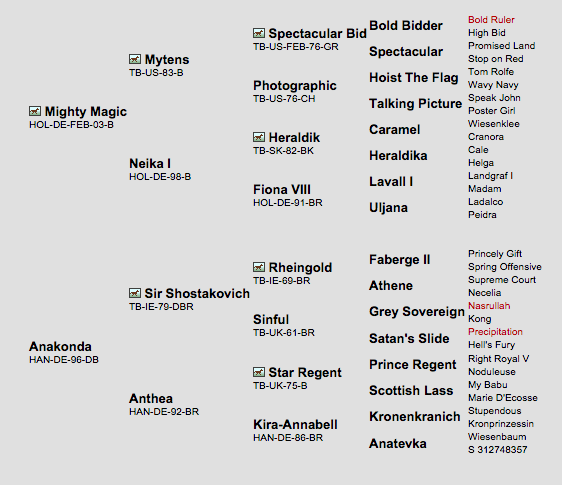 Mighty Magic won the 6-year-old Reserve Championship at Le Lion d’Angers in 2009 before returning the following year to win the 7-year-old Championship. He also competed at the Kreuth CIC2* in 2012 with Andreas Dibowski and the German Eventing Championships at Luhmühlen in 2011.

Anakonda is now 18 and awaiting the birth of her seventh foal, this one by the Hanoverian stallion Viscount. Her sire, Sir Shostakovich, also sired Holly Hudspeth’s longtime partner Lester Piggot, who was 16th at Rolex in 2003 and finished 9th at the Pan American Games that same year. Her granddam, Anthea, is out of the same mare as FRH Butts Abraxxas and sired by Star Regent, who is also the sire of Shamwari 4.

Mighty Magic C, the 2-year-old Hanoverian filly that just won the 2014 USEA Future Event Horse East Coast Reserve Grand Championship this past weekend, is by Mighty Magic, and Lauren Kieffer also has a Mighty Magic baby via embryo transfer out of Meadowbrook’s Scarlett.

Michael purchased the horse for €34,000, or about $42,000, before taxes and auction commissions. Last week we discussed the value of starting young when it comes to producing medal hopefuls, and Michael has consistently done that in his program, campaigning both La Biosthetique Sam FBW and fischerRocana FST from the time they were babies.

So by my calculations, this latest prospect Mighty Anakonda should be winning a gold medal sometime around the 2022 World Equestrian Games. If you want to do some virtual shopping, go check out the horses available at November’s Hanoverian auction in Hanover on YouTube here.

Thank you to breeder Katharina Tietz, Trakehners International and Vinci Parks for providing insightful comments with further information on Mighty Anakonda’s breeding. This story has been updated accordingly.