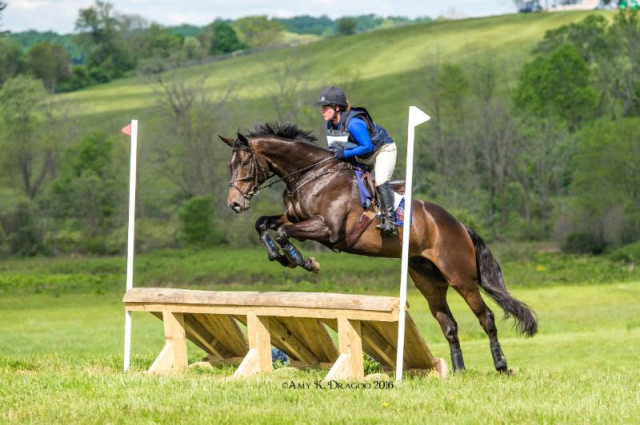 Eventing isn’t a sport renowned for its returns on financial investment, but Kerri Healy’s OTTB Pinazola has already made more money as an event horse than he ever did on the track, having just claimed a $5,000 prize for winning the second annual Plantation Field Thoroughbred Series.

The series, conceived by longtime Plantation Field Equestrian Events (PFEE) supporter Kathleen Crompton, is conducted over six horse trials at which Thoroughbreds can gain points for the annual award. Kathleen said she would love to see more venues launch programs that support and promote off-track horses in the future, and we couldn’t agree more.

“He ran a few times as a 3-year-old without showing much enthusiasm to race,” Kerri said. “I brought him back to Pennsylvania and turned him out for the winter giving him time to unwind.”

The following spring Kerri started Pinazola back to work as an event horse, but he was working on his own timeline. “Unfortunately he spent all of his time sleeping and growing, so I had to be patient and give him more time. I taught him how to jump a little and fox hunted him a little as a 4-year-old, then gave him another winter off.

It wasn’t until Pinazola turned 5 that he began coming into his own. “I took him down to Aiken with me and was able to take him to his first few events. He was a star!” she said.

“I did the East Coast Young Event Horse Championships with him at Fair Hill, and he was so well behaved and brave to finish middle of the pack against almost all warmbloods. He was still growing and going through some awkward stages — by this point well over 17 hands — and I decided to give him more time to grow into himself.”

Kerri continued allowing “Pnut,” as he’s known around the barn, to dictate the speed at which his training progressed.

“In the spring of 2016 I was eager to get him back to competing, and so was he,” she said. “He did one Novice then moved up to Training level, which showed to be extremely easy for him. I took him to a few Training level competitions and had planned to move up to Prelim at Loch Moy, but with the hard ground I decided I better put my horse first and again, be patient.”

With just three Training level events, he qualified for the American Eventing Championships, so Kerri decided to go check out the Tryon International Equestrian Center in North Carolina instead of moving him up.

“Unfortunately, I got a call right before my dressage test that my trailer was broken and I would need to most likely buy a new one, and was so distracted that I completely forgot my test. I promised not to let him down in the next two phases, and he jumped around a tough course beautifully.”

Having placed second in his Novice division at Plantation Field in April, then third at Training there in June, Pinazola ended his year by clinching the 2016 Plantation Field Horse Trials Thoroughbred Series win. In addition to the $5,000 prize to Kerri, the horse’s breeder, Ken Pasco of Fitchburg, Massachusetts, also received a $1,000 prize.

The award was donated by the Pennsylvania Horse Breeders Association and PFEE President Denis Glaccum.

“We believe that the Thoroughbred is an untapped resource for all equestrian sports, but particularly the Olympic discipline of eventing,” Denis said. “I would like to encourage other eventing organizations to create their own series and have this approach grow into a Thoroughbred Championship.”

More than 190 horses have participated in the series at Plantation Field over the past two years. The competition is open to all Thoroughbred horses with a Jockey Club registration, a tattoo or an affidavit from the horse’s breeder.

Well done, Pinazola! So what’s next for this rising star?

“This winter he will be working on his dressage and getting ready to make his debut as a Prelim horse. He is a very sensitive and nervous horse, although he doesn’t show it in the ring, so I’ve taken a lot of time with him letting him grow up and get confidence,” Kerri said.

“I also have two really great coaches, Angela Sasso and Michael Walton, who have been equally as patient and understanding of Pnut and I to guide us along the way. It’s so nice to have a talented horse and a great team to work with; I’m so excited for his future!”

We look forward to following this pair’s journey! Learn more about the Plantation Field Thoroughbred Series and view Plantation Field’s 2017 schedule of events at the website here.