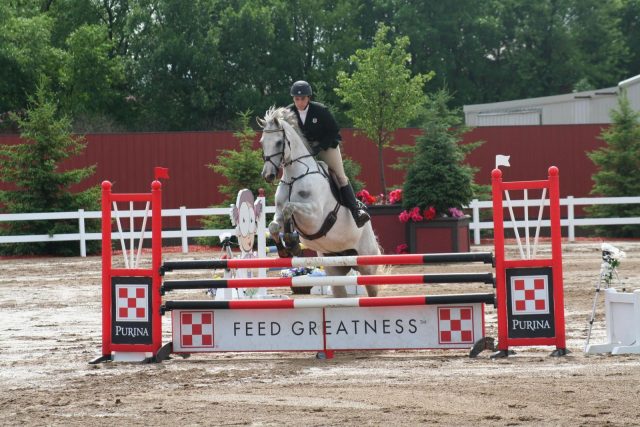 For Hannah Stohr and her 9-year-old barrel-bred off-track Quarter Horse, Sid Startin’ To Drive, their long eight-hour trip from Lenexa, Kansas, to Roebke’s Run H.T. in Minnesota earlier this month paid off. The pair captured first place in the Training-Open A Division on their first visit to the event.

“This was exciting. I haven’t been to a lot of out-of- town shows with this horse,” Hannah says. “I’m a sophomore at the University of Kansas, so I haven’t had a super amount of time to show. I really wanted to have a good training run on a big course, so Roebke’s fit perfectly on my schedule to come up here, and it ended up being a big course.”

The chemical engineering student was a little worried at first because it was the biggest challenge her horse had ever faced, but she was really proud of him because he answered all the questions, leading the division from start to finish.

“Depending upon how Sid continues to go, we might move up to Prelim in the fall,” she says. “Not for any FEI questions, but we might, fingers crossed, until we get more comfortable with the bigger stuff. I hope to compete at five trials this year.

“Back when I was 14 or 15 I thought I would hit all the four-stars and do all of it. Now, honestly, it would be fun to have a horse to compete like this one. I wouldn’t mind getting to Preliminary and doing a couple of Intermediates and maybe a two-star. I don’t really have the guts or decision making to go far beyond that. It’s more for fun at this point than to go pro.”

Stohr has 12 years of eventing experience. She first became acquainted with Roebke’s Run while competing at Young Riders in 2014 where she met Autumn Schweiss, daughter of Mike and Julie Schweiss, owners of Roebke’s Run. Autumn was competing in the two-star and Hannah in the one-star; they also spent time together at a week-long camp.

“Sid has been to one show this year at Longview Horse Park in Grandview, Missouri, and ended up doing a dressage show,” Hannah says. “Because of college I honestly don’t school him that much the week before. He’s a really easy guy, super consistent, so there’s not a really big need to drill him, he knows his job; he’s really a nice guy.”

Sid was put on the market because his previous owner was having a child. He had done a little bit of Novice and Beginner Novice so he kind of knew the ropes, but initially Hannah put extra work into him.

“This was the longest trip Sid had ever gone on, either ever or in quite a few years,” Hannah says. “Yesterday he came out a little bit stiff, but Friday on the flat he did really, really well and in cross country he did well. It’s hard to ride in an awkward position in a trailer for eight hours. I’m very lucky with him, he’s very good at shows, he’s not one to get nervous or weird. In the end it’s all right.”

Stohr got into eventing after first competing in hunter-jumper and participating in Pony Club at the Mill Creek Pony Club in Raytown, Missouri.

“I really wanted to get into eventing,” she says. “The pony club had a good event trainer that I got along with. When she left I was lucky enough to get hooked up with Julie Wolfert. Julie is a fantastic trainer and fantastic person; she’s so good with the horses making sure everything is correct. Pony Club really helped me, but I owe most of my career to Julie. She found my Young Riders horse and this horse for me. She’s my coach and trainer, I work with her full-time.”

She says during her time at Roebke’s Run she kept a close eye on the CCI/CIC one- and two-star riders as a way to further her learning.

“It was a big exciting check in the box,” she says. “All of the other courses I’ve been to with this horse have been kind of local. To come up here and do something on a course I’d never seen before was a lot bigger challenge than I’d ever done. The course was big and had a lot of questions. It was super exciting to have Sid step up to the plate and do it and be as good as he was. I’m glad I came up here.”