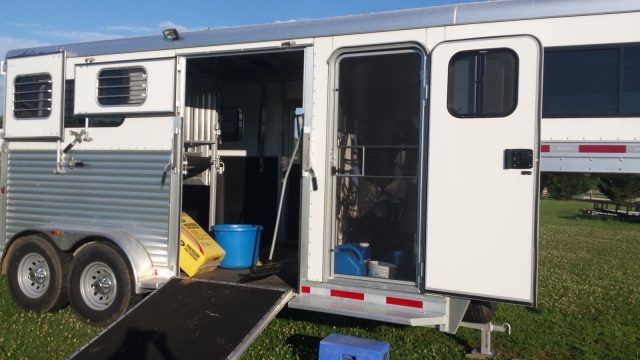 The Unicornmobile tried to kill me this show. Photo by Holly Covey.

In the ongoing saga of getting back to eventing, it’s not fair to talk only about my one unicorn. I actually have a second poor soul that has to put up with me, Lucky, who has had a rather long green horse period.

As in maybe like six years of being green. Ah well. What with one thing and another, including three years where horses took a back seat to work and family, Lucky often got less quality time. And he has spent more time off for injuries and various aches and pains than he deserved, also. A toe crack has taken an entire year to grow out. And a fall, somehow, in the stall in late winter required two months off — although, when I found him on three legs originally I thought the worst and called the vet fully prepared to euthanize him. So he’s back in work also, alongside Hamish, and has been concentrating on the flat work.

I am happy to say his dressage schooling show this weekend was excellent. I am sad to say I am feeling some pain, however, following this excursion. And absolutely none of it is horse-induced. It’s all dumb stuff!

First thing upon arrival I let the tack room door slam, in a gust of wind, on my forearm as I opened it.  That made me gasp for a while and a scrape started a nice red stripe. Didn’t hurt when riding (of course).

Being it was dressage, I feel it would be better to do the black boots, and they are a bit different fitting than the brown ones, and I walked in them about five minutes too long — blisters on both heels. Sometime during the day, I also got some sort of a bug bite or sting on my neck, which of course itched without relief the rest of the day.

And the final hurt was tripping over the edge of the side ramp and bruising my shin but good when I got home and began to clean out the trailer. At that point, I gave up, left the cleanup for Sunday, and headed for a beer.

So how did the horse do? The horse was actually quite good. Initially, warmup was a challenge when he was extremely READY to warmup with all the other horses warming up. But he surprised me with only a very modest buck from his extensive repertoire, and other than a few tense-back moments, was quite rideable in the ring.

I, however, was quite bad in the memory department. I really did not ride the first test well and received two bloody errors. Grr. But I’ve changed. I used to let such a terrible disaster bother me all day and go back to the trailer and just fall apart. However, now, I try hard to smile through it, shake it off, and come back swinging the next time and let me tell you that sea change has taken many years of hard work on myself.

The second test was definitely better when a friend read the test for me. I was able to ride better and give him more. He loves to canter and his only fault was to keep trying to do more of it when we trotted circles or corners. For his efforts he got two good scores and primary color ribbons. Really, I’m not telling you enough about how GREAT he really was. He finds warmups a bit nerve wracking but I think he really loves going into the ring by himself, and doing the test.

I have to remember it’s only training level, only a schooling show, and only low key, but it felt pretty good to have at least part of something go right with this horse. Afterwards, we took a ride with a friend down a coolly shaded trail, splashed in some water, and came back to the trailer mostly like a gentleman.

Lucky has also had some trailer issues and I am happy to say he loaded very well with only a few minutes’ hesitation. He was overall a pretty good boy. So I tweeted afterwards, “I am so lucky, I have two unicorns in the barn,” and really, I do. They do try. They do make me smile.

It is very fortunate indeed to have two horses that have these qualities, because it takes a long time sometimes just to find out if a horse wants to give you what you think they have in them. To get to a checking point, and have positive feedback on the training at that point in time, is all we are looking for. It is essentially the reason we are in this long game, the price we pay for this so-intrinsically-rewarding thing we do with horses. It can last a lifetime and make people crazy, but it can also become all of your soul, fuel your spirit, and define “living.” This is what is meant when they say, “it’s the journey.” Really, it is living with horses.

Enough zen. Now, back to reality. I need to heal up all the boo-boos I incurred on the day. I think someone was just checking to make sure I knew it wasn’t all going to be rainbow farts and fairy dust. Got it.