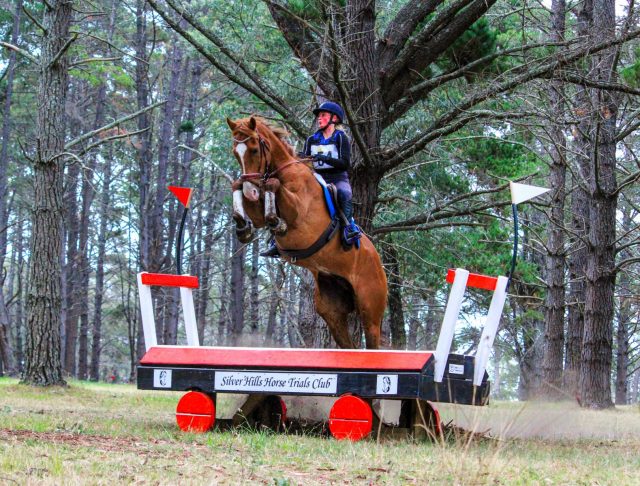 Toni Bearda and Charlie, winners of the Zandonà ‘No Scope, No Hope’ Photo Challenge. Photo courtesy of Toni Bearda.

Last week’s Zandonà ‘No Scope, No Hope’ Photo Challenge had a huge reader response, with hundreds of photos of your high-flying horses submitted from around the world. We put the finalists to a reader vote, and 3,141 votes earned Toni Bearda and her horse Charlie the big win.

We asked Toni, of New South Wales, Australia, to tell us more about her horse. Apparently, this big effort wasn’t just a one-off! Here’s another, from the same competition last month. 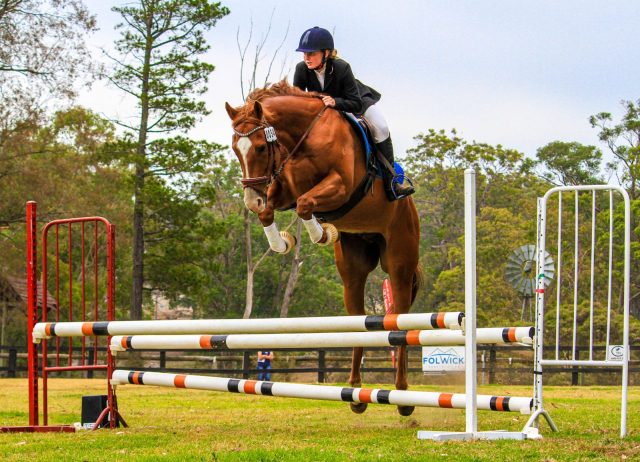 “I think he’s telling us we need to step up to the next level!” Toni says.

Congrats to this pair both on their win — we’ll be shipping them a front pair of Italian-made, highly protective and breathable boots Zandonà Carbon Air Front X-Country Boots (retail value: $237.15). It seems like a good omen for their new partnership, which became official just a couple weeks ago.

“I have had Charlie since the start of this year as a lease-to-buy and only just bought him on the 25th of November for my birthday present to myself!” Toni says of the 9-year-old OTTB gelding. His race name was Strats Lore (Strategic x Cats Galore), but his show name is now Up To No Good.

“We will be going out to as many eventing events as we can this coming year as we only got to three this year,” Toni says. “Charlie is a very smart and friendly boy who lives for treats and affection. My equestrian instagram is @antoniabearda for anyone who wants to follow our journey together.” 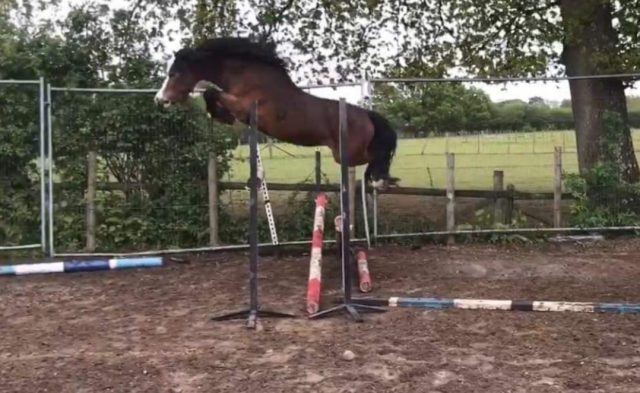 Runner-up “Bushy,” owned by Nicola Marins of the UK, held the lead for much of the poll and ended up in 2nd with an impressive 1,458 votes. We had to find out more about this 12.2-hand pocket rocket!

Nicola shares his story: “We bought Bushy about two years ago after the sad and untimely passing of my Son, Valentino’s previous elderly saint pony Gali. We were understandably heart broken and so Bushy had big boots to fill.

“I first saw a video of this cracking little brown Welsh pony loose jumping, circulating the web. He was for sale and based with agent friends on the south coast. As you can see from his picture he wasn’t exactly the quiet type and totally unproven ridden let alone around children. I kept watching the video over and over and over for months. I couldn’t get this brown pony out of my mind, but we didn’t need a young unbroken, unproven pony for my then 3-year-old son. Insanity even to consider it right?” 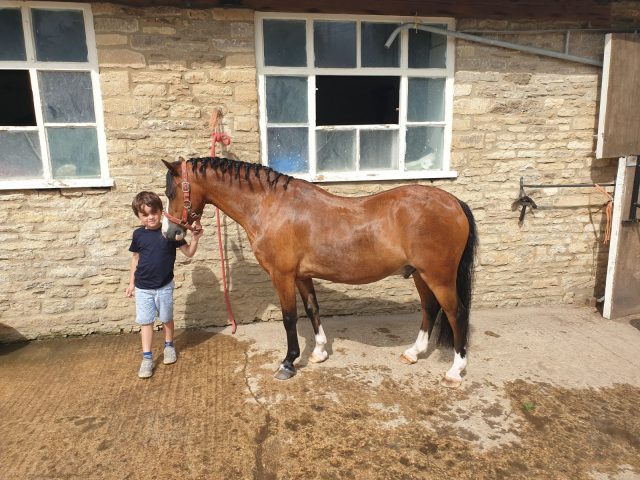 “So sense ruled and I didn’t take it any further than a whimsical musing and a mention to my husband (happens to be a professional producer specialising in stallions). Months passed by and suddenly our aged pony had a catastrophic stroke one night and we were left heartbroken. My son bounced back the quickest and we began out pony search to replace our loss.

“I discounted so many without viewing and felt unusually nervous about this next purchase. A pony this size is not my area of expertise and I cannot ride it to straighten out any quirks. So my son is literally at the mercy of the pony and its temperament. Our previous pony came from Mike and Emma Phillips, the then owners of Quainton Stud UK — my husband taught their daughter on him some 10 years prior so we knew he could be thoroughly trusted.” 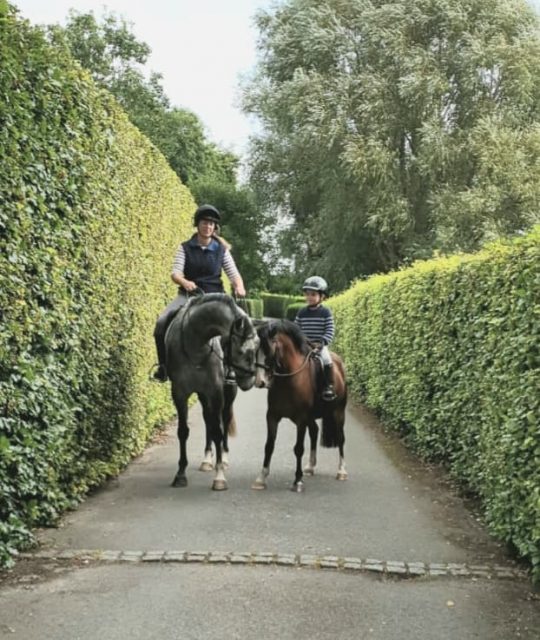 “The pony search surfaced so many ‘what ifs’ and many good ponies were either gone before I could visit or never hit the open market with a long list of children in line waiting for the hand-me-down. I felt hopeless.

“So, we decided to view this little brown Welsh pony on the south coast. We bundled into the car and drove for two hours south — now normally I would have taken the trailer and done the deal there and then, I’m pretty decisive like that. We didn’t take the trailer as we WERE NOT BUYING THIS PONY. We were visiting our friends and putting to rest my gut feeling about him so I could move on with the search for the next aged pony. On paper the Welsh pony is utterly unsuitable and not what anyone should buy for a 3-year old boy, at all, ever.” 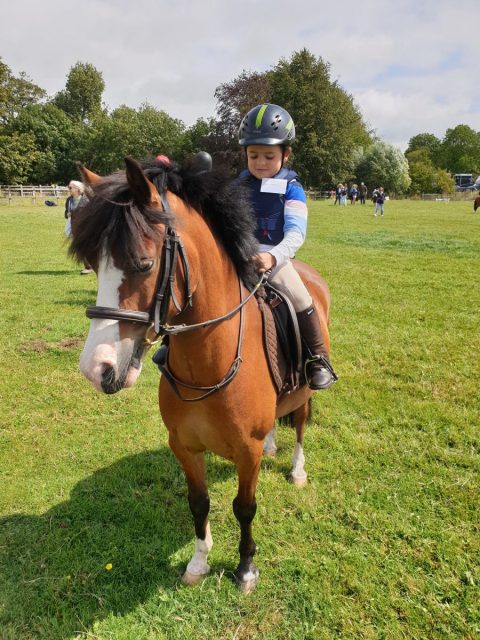 “Long story short. We bought him 🙈 and then had to travel back a few weeks later to collect him. My son named him ‘Bushy’ (we have no idea why) and was so super excited that we knew it was the right thing to do even if it wasn’t the most sensible.

“My husband set about breaking him to be ‘safe’ ridden. Bushy has always wanted to do the right thing but with such inexperience he would often make the wrong choice and sometimes react before thinking. He is nervous of new people and still easily worried by men or heavily built people in particular. The farrier still has to make friends with him every visit and it also turns out he can a ** to catch and only my son was able to get near him, plus Bushy can take a head collar off. Although despite the annoyances he is always forgiven as something really rather wonderful happens when my son and Bushy are together, Bushy adores him and seems to just calm a little.” 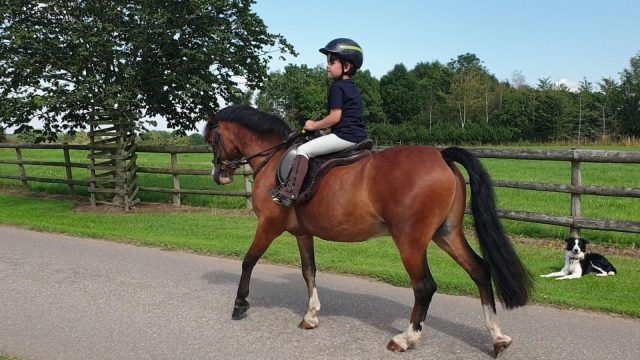 “Fast forward two years, Bushy took Valentino to his first Pony Club camp this summer, something that is also new to Bushy. Together they stole the District Commissioner’s heart and have been progressing very well — Bushy is now becoming a first ridden pony without mummy on the lead rein (Mummy still has kittens when watching), and we are all incredibly proud of the pony he has turned into.” 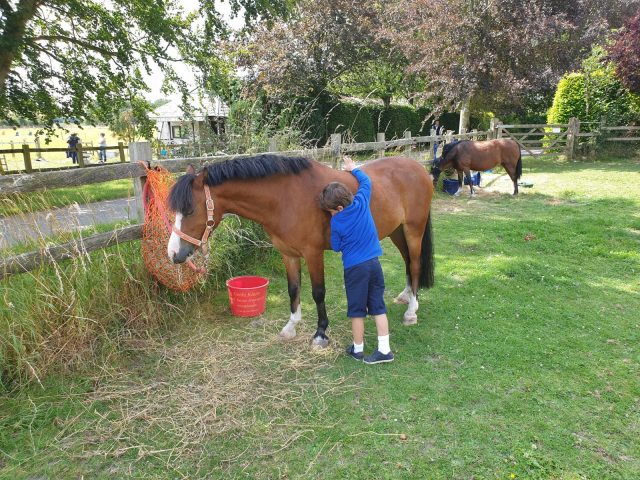 “Wild Welsh Watsit into Bushy We Love You. I hope my son can find the skill required to sit and direct the jump as we have promised should he go to a mini major 128 championship we will buy a box and do it properly. London Olympia Horse Show we are watching you … In the birth of our second baby this year, Bushy has just been secured another 10 years in our family. I’m thrilled!!” 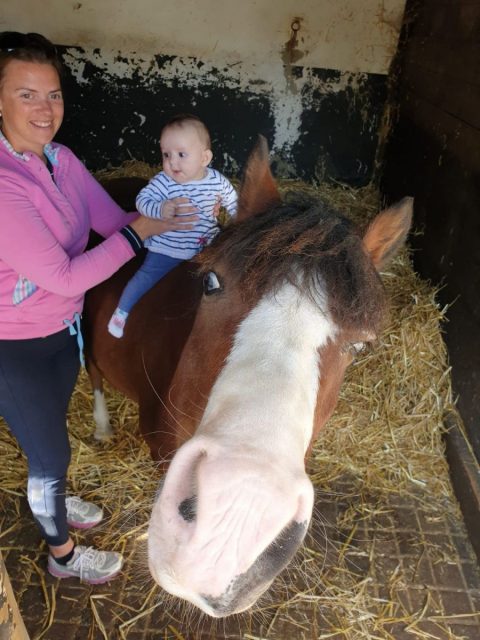 What stories. Best of luck to both of these special partnerships!

Many thanks to Zandonà for sponsoring this fun giveaway. Check out Zandonà’s U.S. website for the full range of products distributed by Seadog Trading Company. Go Eventing!