Remember the joy and pride you felt when you saw Sinead Halpin’s dressage score at Burghley?  A 36.3, over four points ahead of her nearest competitor?  An AMERICAN in first, at Burghley?!  Remember waiting desperately for her cross-country ride, and then seeing that clean, FAST result on the scoreboard?  An AMERICAN STILL in first at Burghley?!  You know you were wrapped up into all the emotion, excitement, and drama…now imagine how it felt to be Meg Kep, Tate’s faithful groom.  You knew Meg would be back to write about it, and I bet you’ve been looking forward to it all along.  And I promise it’s the best reading ever.  Thanks so much for sharing your journey with us, Meg!  A job well done by Sinead, Tate, and his whole team. 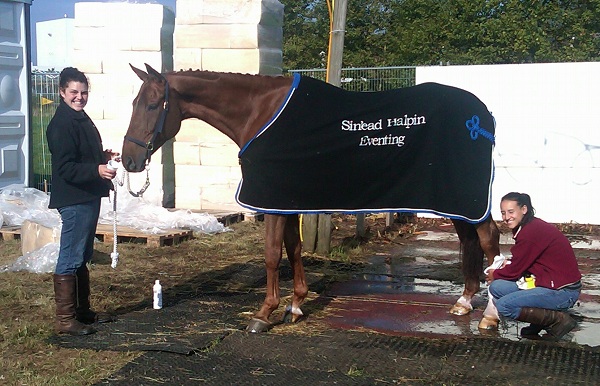 Boekelo 2010, The first picture I had with Tate. Helping his then groom Chrissy McBride prepare for the jog.

When I first met Tate, I wasn’t sure of his abilities. He had his own style, his own personality, and his own opinion. But as the years went by, and I eventually took charge as his caretaker – he has never failed to amaze me. I believe in that horse. A horse that has matured over the last three years so considerably, partnered with Sinead, taking the entire team to new and unimaginable heights.

There was something about the overall feeling of Burghley this year that was different. Maybe it was the fact that I knew if they had done it before they could do it again.

I felt more organized and ready. We had a plan. Tate was fit. Sinead was determined. I had my pink spray and a clean towel.

We had nothing to prove to anyone but ourselves. Regardless of the notions from being left off the team – We didn’t go to Burghley angry. We went happy – in a caravan of the DAF Hotel (Esibs lorry), Kermit (Sara McKenna’s car), and THE GROOMSTER (my rental car renamed by close friend- til-the-end Emily Dunn). Three riders and three horses – all who had been left off the Olympic squad prepared to go tackle one big mother of a track, with three grooms, one puppy named Cooper, and some Costa Coffee in tow.

With plenty of time to digest the disappointments of the summer, we had refocused our energy on being better than we were. And that is exactly what happened.

Tate is not what I would call an “impressive”  horse to look at, but he most certainly is beautiful one. And although I may never win best turned out because of his lanky neck or his heroin chic hips – Tate always finds a way to be noticed at a jog. Hello Burghley, I’m back. 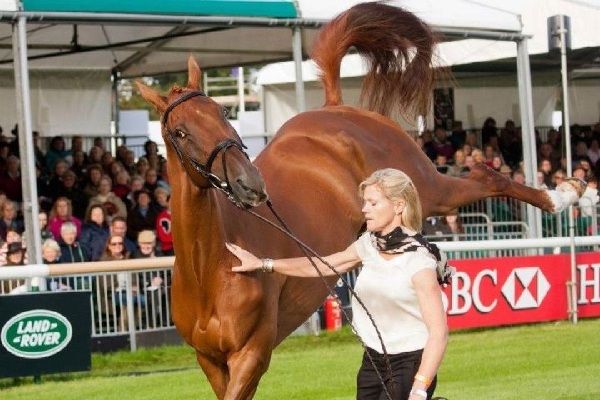 Walking the course this year, I only felt sick at one jump . . . no, not the leap – those bloody white rails. (Oxymoron alert?) But, I felt it was rideable. And by me feeling it was rideable, I mean – Sinead and Tate could do it. Lauren Hough asked me if I would ever want to jump any of these jumps – I replied 1, 2, 3, 4a, c and 5 were alright. . . and maybe the second water I could muster.

We had a late morning dressage test. Sinead, as usual, had her game face on.  They entered the ring in time to catch the applause from Mary King’s ride. That is all Tate needed to know – his fans were there waiting to see what Manoir could do.

Tate is more than capable of consistently scoring in the low forties. And this is what I expected him to do. His changes can be perfect, he had learned to nail his walk pirouettes, he can halt square, and twinkle his toes all the way home. I strategically placed myself so I could see the scoreboard and Sinead simultaneously, and that is when the 9’s started rolling in. The test was by far amazing. Dressage has been an uphill battle for this pair – but today on this sunny day in Stamford, England, the fruits of their labor were shown to the eventing world.  A THIRTY SIX?! (enter: crying megan)

I allowed myself until midnight to enjoy first place at Burghley. I enjoyed a nice bottle of wine thanks to Sinead’s dad all by myself after getting bounced from the groom’s restaurant (apparently BYOB is NOT allowed)… and later celebrated with friend Sara McKenna whose horse Arthur was in 2nd after an equally stellar performance.  But with the arrival of Saturday I knew that an entire field of horses were going to be chasing Tate around that course – and it was back to the game face.

Every groom has their “pre-xc”  routine down to the minute – and it is always unfortunate being late in the day. We spent the day grazing and pacing and quietly talking to ourselves with the occasional nervous laugh. I managed to watch two rounds: Esib who had an unfortunate early 20 with her super jumper September Bliss, but continued on and had an exponentially great round as each jump passed; and Jock, who managed to save a near disastrous tumble in the trout hatchery (watch this and keep an eye on his face and you will see about 5753 different emotions and reactions in approximately 2 seconds. Priceless.), but continued on to a near flawless round. Those damn Kiwis are pretty good.

Finally it was time to get on and warm-up. The weather was getting warmer, and there had been plenty of problems out there. The pit in my stomach started to grow. But Tate was on prime jumping form and he was ready for a gallop.

We proceeded to the final warm-up.

Along the way we passed comrade Will Faudree and Missy as they were walking back after a disappointing tumble at the Dairy Mound. He offered words of support and encouragement as we passed each other and I knew there were only a few minutes left.

At final warm up we had CMP and DOC there to offer final words of reaffirmation and wisdom. Sinead set her clock, I did a final check on boots, tack, and my respiration and we headed across the galloping lane and through the vetbox to the start. I knew the cameras were on us, so I tried not to look like a pansy…. This meant I couldn’t look at Sinead in the eye or speak.

During the final minute I always get paranoid that my reins aren’t fastened. I don’t know if this is just me – and I always tape them before she gets on so I am sure they are on safely, but that is usually the last thing that goes through my mind.

With 10 seconds to go, and with a tear in my eye I managed to squeak “Bring him home” to Sinead and they were away.  This tear was full of nerves, yes, but pride and hope as well.

I quickly set up my vetbox buckets and ran into the rider’s tent to watch. Usually in this tent, the minutes feel like hours…but today, the time flew. Foot perfect and stronger than ever, Tate ate up the meters around the course. There were several instances that in a previous time, Tate would have carefully added, but Sinead’s confidence was so contagious, each question looked easier and easier.  I heard Ed Holloway announce Sinead was approaching the second water. . . wait a minute? He’s already at the second water? The smile hit my face and I grabbed my halter and ran out to wait for my team to come home.

And came home they did, penalty free and under the time – one of four teams to do so that day. (enter: crying megan)

His legs looked clean, his nose was clean, and for the first time at a four star, Tate did not seem to be at his bottom.  Tate was a better, stronger, fitter, faster horse.

And he was still in the lead, unable to be caught.

Sinead was whisked away, and my comrades helped cool him off. I looked at David O’Connor and he gave me the famous DoC wink that said it all.

I led Tate home who was squealing and bucking the entire way. I was laughing and trying not to lose the leader of Burghley. No pressure.

I walked into the barns and was greeted by friends and strangers – with congratulations for Tate. The true feeling of team was in those barns. 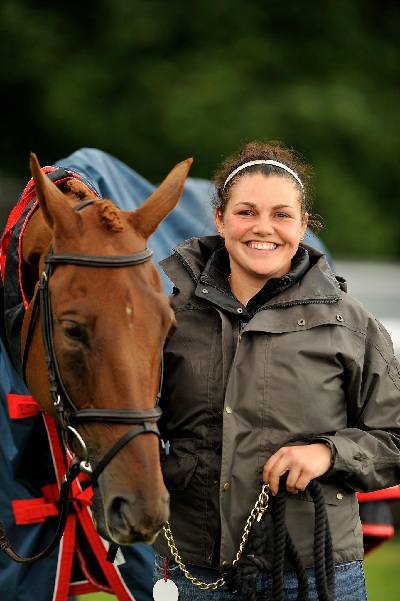 Photo courtesy of Will Baxter

Sunday morning after Tate passed the jog and we were still in first heading into show jumping.(enter: crying megan). Sinead gave me a leg up and I got to ride my Tater all the way home, past the Burghley House, past the pony event which nearly got me bucked off, and back into the barns to wait for our 3:17 jump time. 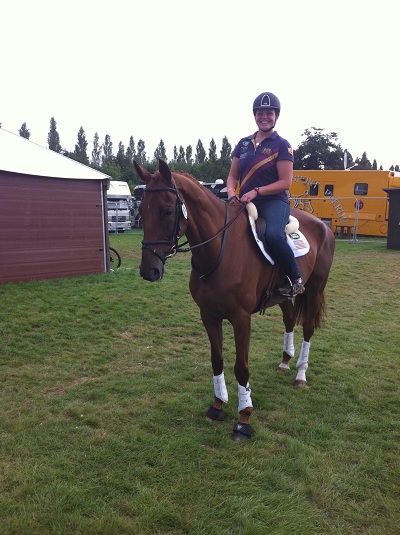 Riding Tate back to the barn. Photo courtesy of Bobby Costello

The hours passed and the rails were coming down. The horses were tired after the big track the day before. When it was time for Tate, he warmed up beautifully. William went in the ring. 2 down. Andrew went in the ring. 1 down.  It was our turn. Sinead has a way of handling pressure that I will never have.  I wriggled my way to the front of the line and watched Tate jump a great round. You could feel the crowd’s support. Everyone wanted Tate to win. He tried so hard. Sinead rode great. It just wasn’t meant to be.

The first thought you have is disappointment. But eventually you take a breath and you think to yourself : “Idiot!”  And the disappointment vanishes, and there is nothing left but happiness. 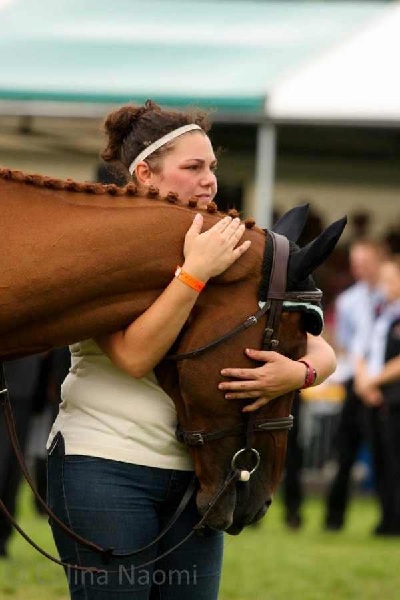 Upside to being second at Burghley – the person we had to stare at the backside of was this guy: 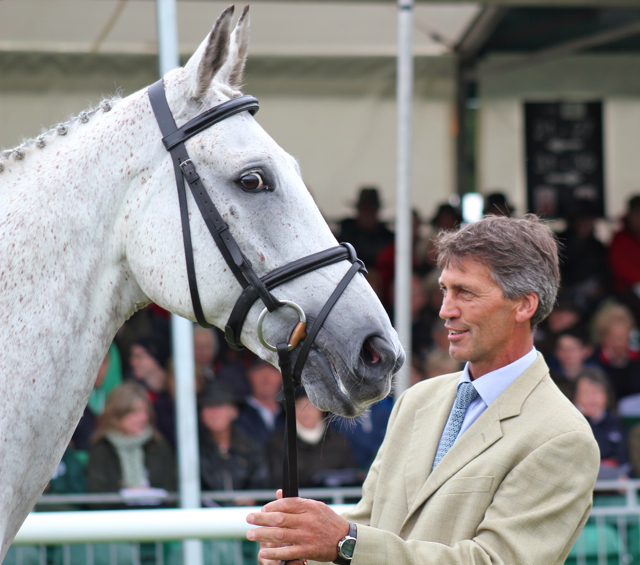