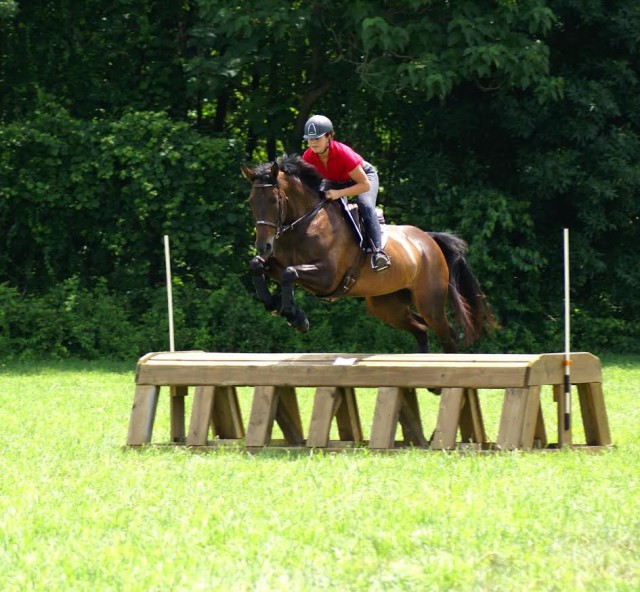 When you’re the head groom and barn manager for a High Performance program, there isn’t much time to make a lot of headway on your personal goals. Super groom Meg Kepferle knows this first hand, having spent the last few years working for Sinead Halpin. Her hard work has not gone unnoticed, however, and now she’s putting all of the pieces together to start building a business of her own — and perhaps a return to competition with a new ride.

Meg first began working for Sinead in 2010, and she quickly began learning the ins and outs of an upper level eventing business. She became the head caretaker for Manoir de Carneville and a valued assistant to Sinead as she traveled the world competing.

Eventually, Meg took up teaching, building a small base of clients who were young or adult amateurs learning the ropes of the sport. “I think it’s important to have that exposure to a high performance program,” Meg explained. “We make it accessible for riders of all levels, and they feel comfortable asking questions. Our students have a clear path for what they want to do, and we give them the tools to achieve their goals.”

It’s a business model that has worked well for both Meg and Sinead, who coaches the upper level riders while competing herself. Meg, who has previously evented through Training level, is a big believer in being able to demonstrate what she is trying to teach, which led her to begin riding more for both Sinead and her husband, Tik.

“I’ve been riding for Sinead and her husband for awhile now,” she said. “I think now is the time to start riding and teaching better. I think it’s better to teach while you’re riding regularly — I feel more confident in my teaching abilities when I can do it myself.” 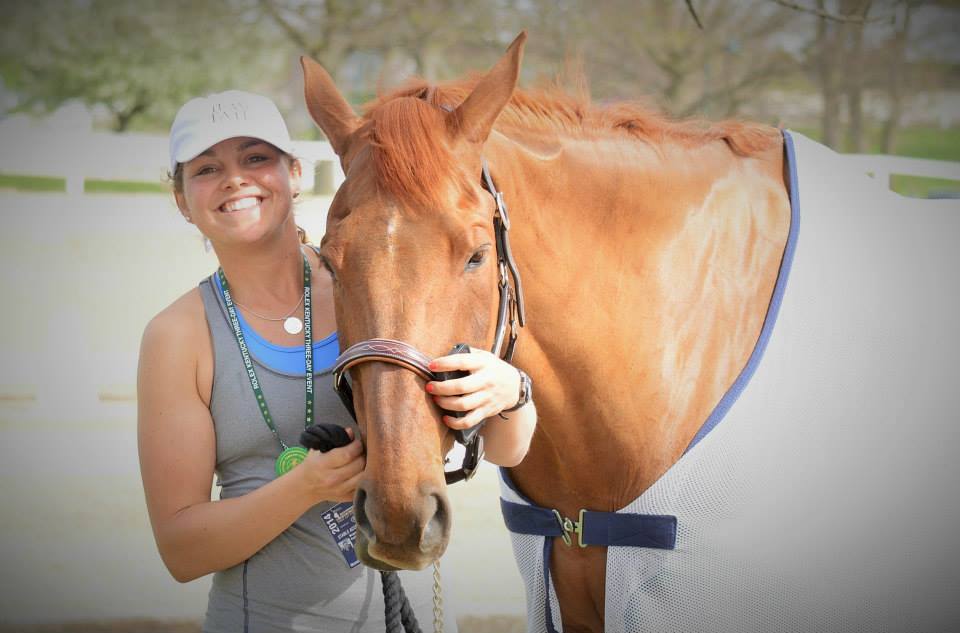 When asked what her best attribute for being an instructor is, Meg quickly responds with patience. “I’m really good with younger kids and timid adults,” she said. “Which is funny, because I’m otherwise a pretty impatient person. But I compare our program to a farm league. I develop the talent and then I send them on. If I have a kid who rides better than I do, I know I can’t keep teaching them. I think that’s an issue that many people run into, the trouble letting go. I want them to go on and achieve bigger things if that’s what their goal is.”

To that end, Meg has handed off most of her management duties for Sinead to newer employees and is able to focus more of her time on building her own clientele. “Sinead has been very supportive of everything — it was actually her who asked me one day what I was planning to do in the future. It really got me going on what I wanted to do, I really hadn’t thought about it too much.”

While Meg says she doesn’t plan to grow a huge program, she plans to keep growing her lesson program and also try to get a few more competition rides secured — all while sharing barn space with Sinead’s business. It’s a successful model, and proof that the two have forged a professional relationship that will allow the other to grow.

“I’ve been ‘rogue’ for so long, it’s an adjustment,” Meg said with a laugh. “But this is what I’ve always wanted to do. Life just has a way of happening, and I’m so grateful for all of the opportunities I’ve had — I’ve learned so much from watching and being so heavily involved with Tate and the program. It’s difficult to really comprehend until you’ve experienced that, but all of that will be useful now.”

Meg has enrolled to get her ICP certification and plans to eventually get her Level 2 certificate, with plans to continue moving up with experience. Competition experience is something she’ll need to continue to get better as a rider and trainer — and that opportunity has presented itself in the form of a young Irish mare. 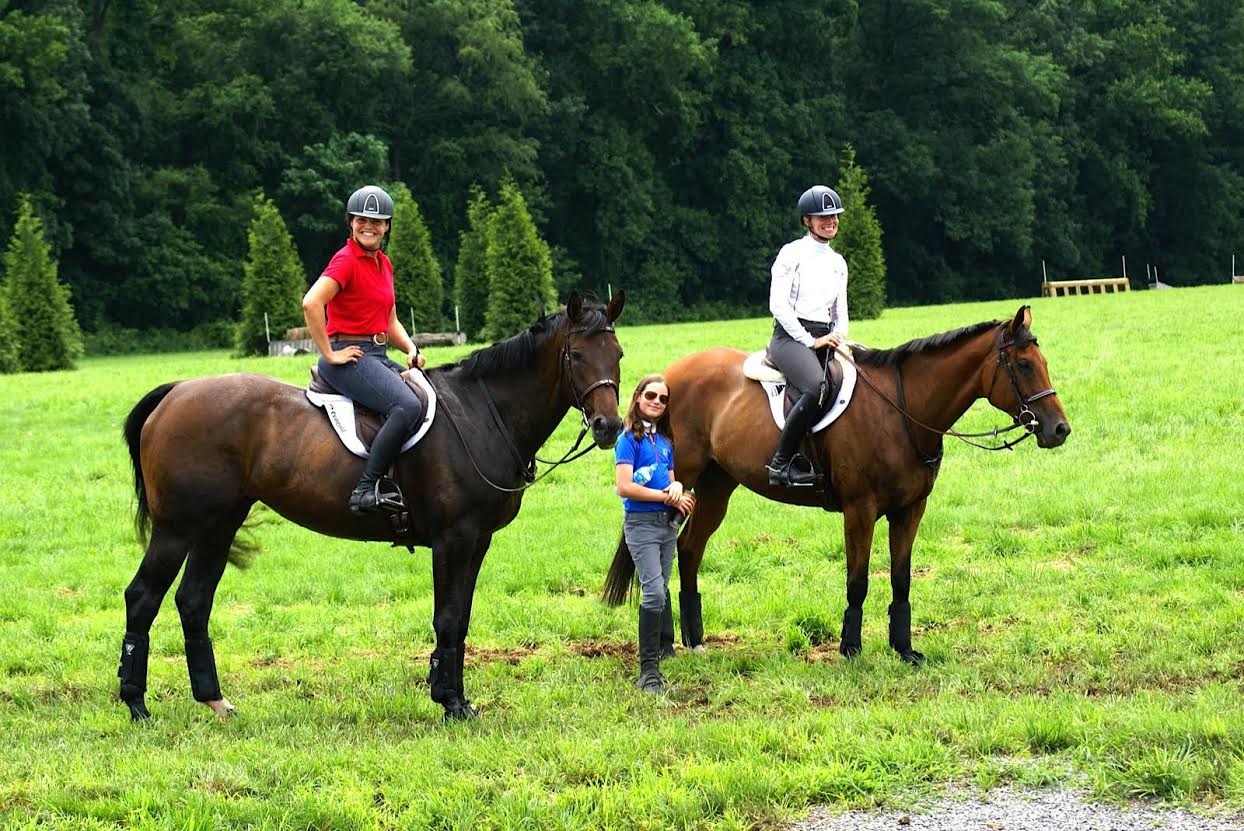 Meg and “Tegan”, Sinead on Gail Opatuts’ High Altitude and Kasey Callanan on the ground while cross country schooling at Windurra. Photo courtesy of Brian Callanan.

In the fall of 2014, Sinead received a call from Richard Sheane, one of the masterminds behind the Cooley name, advising her to snatch up a promising four-year-old mare. Caherconree Cooley is by OBOS Quality out of a Puissance mare and was the Champion Mare of her Future Event Horse class at the Dublin Horse Show, showing early talent for the sport.

“Richard knew Sinead was looking for some young horses, and he told her she needed this one, so she was purchased sight unseen,” Meg said. “Sinead wasn’t sure what she was going to do with her. She was only four and she had some other horses who were farther along in their training that she was focusing on.”

Sinead owned “Tegan” on her own, so was looking for an option to either keep her training progressing or send her to compete as a jumper. “She and I had talked about me becoming more of a rider and focusing on my business. She let her take a lesson on Tegan and I really liked her. She’s definitely the nicest jumping horse I’ve personally sat on.”

The idea occurred to Meg to try to make the mare her own, so she started putting some feelers out and found that Sinead was happily receptive to the idea. “I decided to syndicate her and have sold three out of five shares, all to first time horse owners,” she said. “It’s been really incredible to see the support from people and from Sinead.”

With the syndicate officially formed, Tegan officially became Meg’s ride to bring up the levels. Last weekend, Meg made her return to competition as a rider on a horse of her own for the first time since before she began working for Sinead. It was a moment to remember as she crossed the finish line following a clear Novice cross country.

“You’d think we’d just finished running Burghley — I’ll be honest, I had a tear in my eye,” Meg said. “She was just foot perfect. I’m really lucky. She’s just in a whole new league. We’re both green, and we have a lot of work to do, so it’s just going to be about being patient with her.”

Meg’s goals for the remainder of the year include a lot of mileage at Novice. “Sinead put it well when she said we want to wait until Novice just feels like Novice, until it feels easy. Then we’ll be ready to move up. But she just turned five this year, so we are taking it slow.”

Eventually, Meg would love to be able to do a two-star with Tegan, who she feels is more than up to the task. “That’s my plan at this point,” she said. “If we get there — and that’s several years away still — we’ll reevaluate. But having never even done a one-star, I think a two-star is my big goal for right now.”

If there was ever any proof that hard work and paying your dues can open more doors than you ever thought possible, Meg’s growing business and talented horse is it. With the proper support system in place, there are many opportunities for success for the ambitious.

“Your goals change, and then one day you wake up and wonder what you’re doing with your life,” Meg said. “At this point, I’m just going with it. I’m very lucky, and everything is just very exciting right now.”