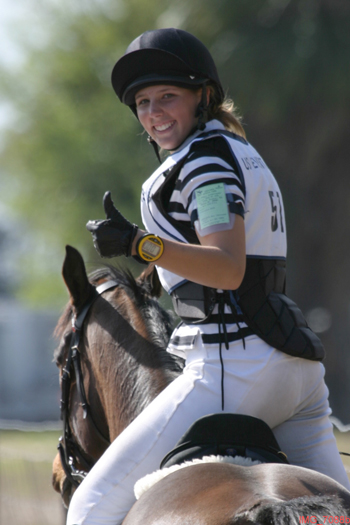 One of the things that I have always sought to understand is the role of eventing in the larger scheme of life.  Does eventing still mean something when the event is over or when we leave the barn?  Feeling that the answer to this question is a resounding “yes” is deeply important to me, and I am never more convinced than when eventing reaches out to support and honor something beyond the protective walls of our sport.

In just such an instance, Richland Park is introducing a special perpetual memorial trophy this year in honor of Megan Schoenmaker, who passed away in a snowmobiling accident last winter.  Megan grew up as an avid eventer in Michigan.  I remember competing against her and her horse Fujiyama in our younger days.  Richland was one of Megan’s favorite events where she won the inaugural training level division.  Megan will be remembered at Richland, with the lowest dressage scoring junior training level rider receiving her memorial trophy each year.  Megan’s parents will be handing out the award at the event this coming weekend as a great honor to Megan and a great statement for eventing.

Let’s move on to the news and notes…

–Who will win the European Championships this weekend?  The FEI wants to know.  Great Britain has won the last 8 times, so I’m not going to bet against them.  Hometown Germany is hungry for their first ever European Championship on German soil.  The Championships will also qualify two more nations for team births at the London Olympics.  The top two placed unqualified teams from FEI regions A, B, or C will join the United States, Great Britain, Canada, New Zealand, Germany, and Belgium on the team list for the Olympics.

–How would you like to be Matthias Rath right now?  He had a disappointing weekend with Totilas at the European dressage championships, which ended in a 5th in the dressage freestyle.  The Netherlands had to enjoy winning the gold behind Adelinde Cornelissen’s victory over Totilas.  [FEI Press Release]

–Be sure to get your AEC entries in, because today is the closing day.  I’ll be there running around like a chicken with my head cut off trying to write, and get video of 5 arenas at once.  That sight alone is worth the price of admission!  [USEA]

–Lainey goes back to her roots, California style [Lainey’s blog]

–Lillian Heard has made it to Ireland [HJU]

–A rider in Ontario passed away last Friday after falling from her horse without a helmet.  You don’t need a brain surgeon to tell you to wear a helmet.  If you think it’s safe not to wear a helmet because you are at home, or close to the barn, or for any other reason then think again.  Please please please wear your helmet. [Guelphnow.ca]

–I’m trying to go an entire news and notes post without mentioning Burghley.  So far so good.

–The Dalai Llama has honored Scottish long rider George Patterson with an award for Patterson’s longtime efforts to assist Tibet.  So he’s got that going for him.  Patterson has a remarkable life story, including a perilous equestrian journey over the Himalayas during which he nearly froze to death and reportedly slept with a Yak to get body heat.  A Scottish joke at this point just seems too easy to even bother.  [Horsetalk]

–The one thing that no one will say this week and weekend is “why isn’t Eventing Nation writing about Richland.”  So, I won’t chat too much about the event here, other than to say the 17 Pan American short listers other than Boyd are all entered in the “PAG” division and scheduled for dressage on Thursday.  [Richland Ride Times, Timetable]

—Best of the Blogs: Jennie Brannigan is excited to have Cambalda running in the CIC3* at Richland

I leave you with video from the Caber Farm HT in Washington last weekend through the camera of undoubtedly a loving mother:

That’s all for now.  Wherever you might be, thanks for making Eventing Nation part of your day.  Stay classy EN.