I will start this story by stating at the outset, this is my first ever book review. What qualifies me to write a review? I don’t know. I can read, I can write (although many will debate that point), I have opinions (too many sometimes) and I was asked. So in the end I guess that is all that matters.

Samantha Miles is a rider, writer and editor. She has many more skills but let’s start there. Samantha emailed me following my Seinfeld Story and told me about her upcoming book, Stories from the Saddle, asking if I would like to have a look.

I did and I got hooked, Stories from the Saddle is a series of long form interviews with Australian riders from all three Olympic disciplines. I know, that means reading about Dressage Queens and those strange Jumper people, but to be honest, I got so immersed in their stories, I actually forgot what discipline they were involved in. In all, twelve riders are featured in the book, including four Aussie Eventers, Heath Ryan, Wendy Schaeffer, Prue Barrett and Hamish Cargill (yes, that Hamish).

The book opens with Rozzie Ryan, dressage competitor and wife to the larger-than-life Heath Ryan. Knowing the dynamo that Heath is, I was very interested to hear Rozzie’s take on life. Samantha based her questions around the three themes, tears, tantrums and triumphs, and these run through all of the interviews.

I met with Samantha at her home in Sydney’s north west, right in the centre of much of Sydney’s equine community. We talked about our own tears, tantrums and triumphs. This is Samantha’s second book, her first was written as a teenager battling the effects and thoughts of a life threatening cancer. That book, At least it’s not contagious: A personal story of a struggle with leukaemia, chronicles the life of herself as a 19-year-old faced with the threat of a shortened life.

I got the impression, after spending a couple of hours with Samantha, that her horses are her ‘elixir of life’. Life with horses can be humbling every day, it can also be triumphant from both the big and the tiny wins. Horses have an amazing capacity to put things in perspective for us.

‘What struck me when I was interviewing the riders,  no matter who they were, how famous they were as a rider, gold medals or near misses, they all had stories that I could relate to, even as a very ordinary rider who never got much past 3 foot. At the same time, all of these riders had a common trait, an amazing amount of sheer dedication and determination, that us mere mortals can only admire.

With that trait, that never-give-up, never-lose-sight-of-that-gold-medal attitude, nothing can stop you. I love my life, my family and the things I do, but I don’t think I can muster the determination it takes to be that dedicated to win gold.’

The stories will make you laugh, cry and stare on in amazement at their grit and determination. For starters here is Rozzie Ryan (a DQ), her introduction to dressage is not so flash, and one I can certainly relate to, I have a couple of pairs of jodphurs that have taken a similar beating.

‘My memories of my first ever dressage test are terrible. I must have been about seven because for my seventh birthday I had been given the most beautiful pair of jodphurs I had ever seen. They were hand stitched and I was terribly proud of them. I wore them for my first dressage competition. It had been raining quite a lot and the organisers had harrowed the warm-up area. I was on Stella, the roller pony. I had warmed up and was ready to go in the arena but stopped for some reason, possibly to get the final touch up, and she got down and rolled. When she got up one side of her was absolutely covered in mud. One side of me was also absolutely covered in mud — all over my new jodphurs! I was furious. I rode my dressage test with one side of Stella and me a complete sheet of mud. However, this turned out to a good thing, in hindsight, as every test I did from then on could only ever get better. I don’t think the jodphurs ever recovered though.‘

Samantha with Tom at her home.

Back to the book, I was so struck with awe at the determination, feeling and never-say-die attitude of the riders, I found that once I started reading a ‘Rider Story’ I couldn’t put the book down until I had finished their story.

There is that never-say-die attitude buried in Wendy Schaeffer’s story. I have to admit I didn’t know this story before reading the book, as it happened before I came to the sport. It is centered around Wendy’s bid as a 21-year-old rider to represent her country at the Atlanta Olympics and win gold.

Lets start at the beginning of the story;

At 21 Wendy Schaeffer was the youngest female rider to win an Olympic gold medal in three-day eventing. At Atlanta in 1996 Wendy rode her horse Sunburst, whom she had brought up through the ranks of pony club, and finished with the leading score of the team.

Australia had won team gold at Barcelona four years before in 1992, the young Wendy tackled her first Badminton only nine weeks out from Atlanta and finished 11th, giving the selectors no choice but to include her on the team.

Straight after Badminton, Wendy travelled back home to Adelaide to compete in the Gawler Three Day Event, which is now the Australian International Three Day Event (or Adelaide). While competing at Narcoote, a lead-up event to Gawler, disaster struck….

‘…. riding Whim on cross-country I fell trying to negotiate a difficult bank-to-bank combination. As I fell my right leg was crushed between Whim and the side of the second bank. Apparently the spectators could hear the crunch of bone cracking.’

The story, and fact that Wendy was even able to be at Atlanta is amazing and not something I can do justice in this short piece … you will have to buy the book. What I can tell you is no matter what discipline tickles your fancy or where you are in the world, you will enjoy this book. 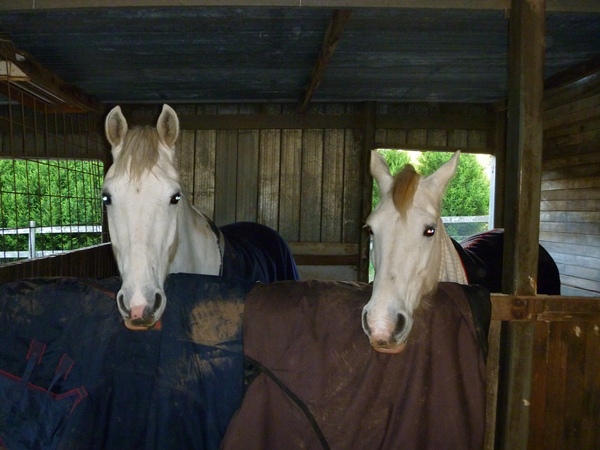 Minty (Son) and Mia (Mum), both love a good scratch and cuddle.

I am going to finish with one of the stories that had me LOLing and LMAO! There’s a good number of these in the book as Samantha asked each of the riders to detail a story where they had an embarrassing moment. Hamish Cargill is well known to EN, so I will leave you with Hamish’s.

‘Some years back, in one of the first clinics I did (only a few months after receiving my Level One coaching accreditation), I was teaching a group on the cross-country at a Macarthur Horse Trials open day. My group of very green prelim and introductory riders, mostly riding ponies, were having some difficulty with a narrow pipe combination.

We had been there for some time when along rode a rather Famous Eventer on his prospective new eventing steed, a thoroughbred which had won millions as a racehorse. As he cantered straight through the middle of my lesson on this millionaire racehorse and approached the fence, he asked whether it would be all right to jump through before he continued on his way. I politely said yes before quickly pulling one of my riders, who was circling to jump, out of the way.

This was when things started to go wrong. Millionaire Racehorse, at this stage still more racehorse than eventer, decided, like the ponies in my group, that this jump was not really his bucket of oats and ran out. Not so bad; happens to everyone. Famous Eventer circled and approached again.

By this stage Famous Eventer was starting to look a little exasperated and I couldn’t help noticing the red tinge starting to spread across his face. When Millionaire Racehorse ran out again I couldn’t help myself. He was, after all, interrupting my lesson. And the ponies were getting restless.

‘Would you like to join the lesson?’ I asked of a person who had been winning three-star level competitions while I was still writing with crayons.

If Famous Eventer had the ability to shoot poison darts from his eyes then those would have been the last words I ever spoke. There were no further exchanges between us, and none were needed as the look on his face put me firmly back in my place, somewhere near the bottom of the eventing food chain. I was no Famous Eventer, just a smart-mouthed little twerp.’

There is more to this story, it is all in the book.

So how do you get your hands on the book? Well there are a number of ways, it goes on sale on September 1, it will be available online from www.shop.abc.net.au or as an ebook from Amazon or you can be one of the three lucky EN readers who win your very own copy.

How do you win a copy? Well, let’s just say it involves your most embarrassing moment at a horse event, in or out of the saddle. We have more to whet your appetite in the coming days and all of the detail on how to enter the competition will be in the next story, just think really embarrassing.

I have asked EACH member of the EN Writing Team to share their most embarrassing moment with me and I am going to share them with you. Until then……