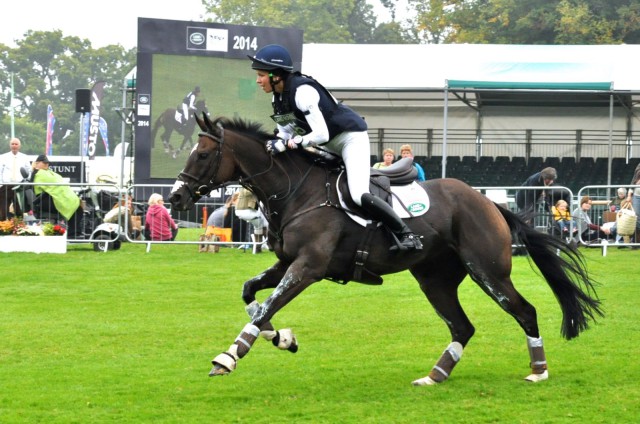 Meghan O’Donoghue and Pirate at Burghley. Photo by Kate Samuels.

Meghan O’Donoghue and her OTTB Pirate leapt into the hearts of the eventing community last spring when they stormed around their first Rolex CCI4* with a fast and clear cross country round to ultimately finish 12th. Since that time, they’ve enjoyed a fairy tale journey all the way across seas and back again. They completed their second Rolex this spring and were subsequently named as alternates to the Land Rover U.S. Eventing Team for the World Equestrian Games.

Meghan never dreamed that her inexpensive racehorse project would become her ticket to WEG and her key to becoming a household name in the sport of eventing. Her appreciation of this little horse and the opportunities afforded to her are apparent from the moment that you talk to her about her partner. “Pirate is a once in a lifetime horse, and he’s already taken me so many wonderful places,” she said.

The pair spent the summer in Chantilly, France, with the rest of the U.S. team preparing for the world championships. Team coach David O’Connor and show jumping coach Silvio Mazzoni were there every day for weeks beforehand, helping the riders to tweak and improve and learn in the most extraordinary way possible, Meghan said.

“This summer was nothing short of amazing. To be named a WEG alternate at only 25 years of age on my first real upper level horse is something that I’ll never forget,” she said. “I’ll be spending my whole career chasing the chance for more experiences like that.“ 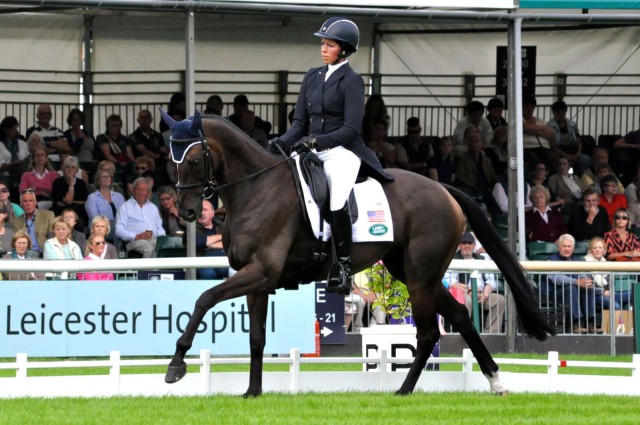 Following the World Equestrian Games, Meghan and Pirate, along with several of the other alternates, returned to Maizey Manor in England as they prepared for Burghley CCI4*. Known as the biggest four-star course we have in the world, it was certainly on Meghan’s bucket list, and she was delighted to have a horse underneath her who exuded confidence in the running and jumping department, she said.

They pulled off a great performance in the dressage, posting their best score to date at that level with a 54.2. In speaking to Meghan after her ride, she was simply elated with Pirate and how he has been maturing in the dressage ring, despite a rather wild warm up.

“Pirate’s flat work has improved leaps and bounds throughout this year from the help of David O’Connor and Jacquie Brooks. He did pull out his best test to date at a four-star after a warm up that I hope to never repeat! I was proud of him to hold it all together and perform in the ring after thinking it was time to go cross country in the warm up,” she said.

The pair prepared for cross country the following day, with the biggest track they’d ever seen in front of them. Meghan was positive though, as she felt that there was no better horse than Pirate to be tackling Burghley. They cruised around the first half of the course looking amazing until they suffered a really unfortunate fall at 18b, the airy corner after the Maltings Bounce that caused more than its fair share of problems throughout the day.

“Pirate was thrilled to burst out of the start box and tackle the largest track in the world. The first half was magic! The fall was a huge disappointment. It happened so fast, but from what I can tell, the fall was a combination of being slightly on the wrong line and Pirate struggling to read the extreme width of the corner,” she said. “I’m extremely thankful that we both walked away with no major injuries. This is a tough sport, and I know that won’t be the last disappointing day for me, although at the time it was very hard to swallow.

“The past is what it is; you can’t change it, only learn from it. The present must not be taken for granted, and I am always looking to make the most out of any opportunity that comes my way. I am so blessed to have a horse to sit on that has the heart and talent for an event like Burghley.” 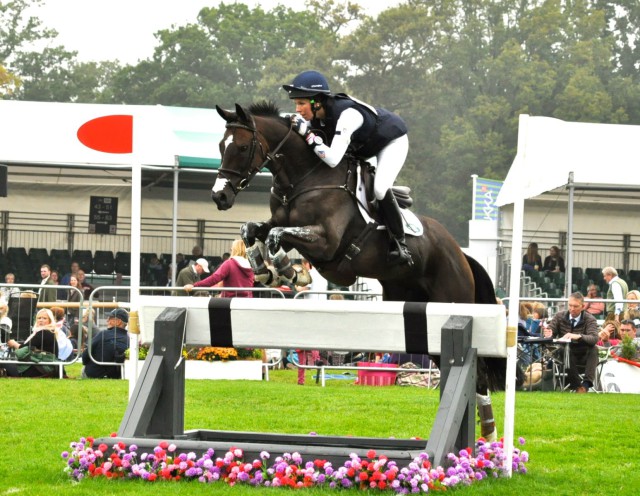 With Pirate now on vacation, Meghan has returned home to Illinois, where her family runs a thriving equestrian center called Le Cheval de Boskydell. This season was her first year not employed by a professional and feeling out how to run her own business, as she paired with Lynn Symansky for most of the year in Virginia; but now that winter has come, she has gone home to be with her support base in Carbondale.

“I have a huge support group at home that I enjoy helping part of the year, and it provides a great base for my passion of doing OTTB sales,” Meghan said. “I still feel there is so much to be exposed to before settling into a permanent situation, and while I’m still a young professional I feel I need to take advantage of the option of not being in one place.”

While Meghan has been the sole owner of Pirate since he was the tender age of 3, she’s taken the plunge into syndication this year and hopes to complete that before the start of the next show season. The syndication will enable her to continue with Pirate on his road to qualifying for Rio 2016, as well as searching for a fresh talent for the future.

As for 2015, Meghan and Pirate are aiming for their third Rolex in the spring, starting with a trip to Florida in the early months to get working before it thaws in Illinois. There she will enjoy more training from the top equestrians in our sport and hopes to take every last opportunity that Pirate offers her of experiences at the upper levels.

“Having this horse that is giving me these opportunities is something I intend to take full advantage of, but I really couldn’t do it without my family, my friends and all my supporters. My amazing sponsors give me confidence and keep Pirate happy and healthy, and everyone who believes in me keep the dream alive.”