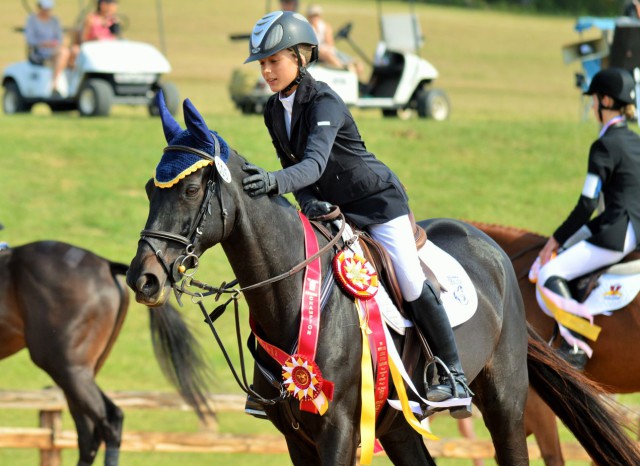 Mia Farley and The Good Witch at the AECs. Photo by Sally Spickard.

When looking for a new mount to take her up the levels two years ago, then 12-year-old Mia Farley found herself with the opportunity of a lifetime to team up with The Good Witch, Jen Wooten’s former upper-level partner. Now 14, Mia said the dark bay mare has taught her that big dreams really can come true, as she discovered this past weekend at the Nutrena USEA American Eventing Championships.

Mia, who hails from San Clemente, Calif., began riding at the age of 7 and quickly turned to eventing as her sport of choice. “I was riding a little paint pony before,” she said. “We were looking for a horse that I could move up on, and (The Good Witch) was an option we found as a lease.” Owned by Donn and Daisy Tognazzini, the mare retired from international competition in 2012.

In a career spanning eight years, Jen Wooten and “Pooh” completed 30 competitions at the Advanced and CCI4* level, including a go at five out of six of the world’s four-stars. And The Good Witch is no stranger to the AECs, as she won the Gold Cup in 2010. Her accolades also include being named 2008 USEA Mare of the Year.

Upon retirement, as with many horses of The Good Witch’s wisdom and experience, teacher became her new job title. It was then that Mia met the mare, and upon riding her for the first time, she knew it was a perfect fit.

“I don’t think I stopped smiling from the moment I got on,” Mia said of their first ride together. “I had to get used to her stride and style, but it was just such a good fit; I don’t think it could have worked out any better.”

So Mia and Pooh began their partnership together, training with Ginnie Bryant. The pair competed at Training level for their first two seasons of competition together, accumulating numerous top placings and finishing outside of the top five just once in 11 starts.

In 2013, Mia and Pooh journeyed to Texas to contest their first AECs together in the Junior Training division. They finished on their dressage score to take home fifth place in a large division of 29 combinations.

Coming out in 2014, Mia had her sights set on moving up to Preliminary, and she and Pooh contested their first event at that level at Galway Downs in February, once again finishing on their dressage score to take home the win.

Since then, these two have been unstoppable at Prelim, winning each start they’ve made leading up to their return to Texas for this year’s AECs. “The best part of riding her is that I get to experience a great canter,” Mia said. “There’s so much I feel I can do now thanks to her teaching and Ginnie’s coaching, and it’s just been a great experience.”

Mia and The Good Witch took home the Reserve Championships in the Junior/Young Rider Preliminary division this past weekend in Texas, adding nothing to their dressage score of 29.1. Their impressive dressage score wasn’t quite enough to catch wire-to-wire leaders Meghan Noelle Wilson and Ghypsy, but Mia still wore a big grin during the victory gallop, covered in ribbons for her efforts.

When asked about her goals for the future, Mia says she wants to go to the Olympics. “I know everyone says that, but I just keep learning that things are possible when you work hard,” Mia said. Mature beyond her young age, Mia and The Good Witch seem to have a bright future ahead of them, and we wish them luck in all of their future endeavors.