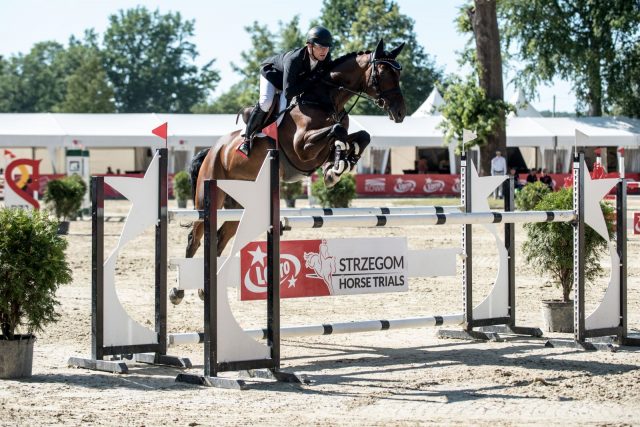 The new bombshell partnership of Michael Jung and fischerChipmunk FRH achieved their first International win at LOTTO Strzegom Horse Trials, leading the way for Germany to clinch the third leg of the FEI Nations Cup.

Michael acquired the ride on the 11-year-old Hanoverian (Contendro I x Havanna, by Heraldik xx), who is owned by the DOKR, Klaus Fischer, Sabine Fischer and Hilmer Meyer-Kulenkampff, earlier this spring, and it’s already been fireworks with two second place finishes in short four-star format. This weekend, their only penalties were time faults on the cross country for a final result of 25.2.

“I’m very happy about my ride. fisherChipmunk is a great horse. The weather was not the best, but he was very concentrated and super to ride as always,” Michael said.

Great Britain’s Ben Hobday took up second place after a penalty-free show jumping with Shadow Man. He holds the flag for the British team who finished second on a cumulative score of 122.5.

Michael’s compatriot Andreas Dibowski earned third place with FRH Corrida after a clear round for a score of 28.8. Both were valuable assets for the German team, aiding in the collective score of 90.4.

The Netherlands finished third, with Tim Lips as their best finisher in fourth place. Tim and Bayro saw one rail come down to finish on 31.4 penalties.

Woodge Fulton and Captain Jack finished 42nd as the sole American entry. They had two rails fall today to finish on a result of 73.5. 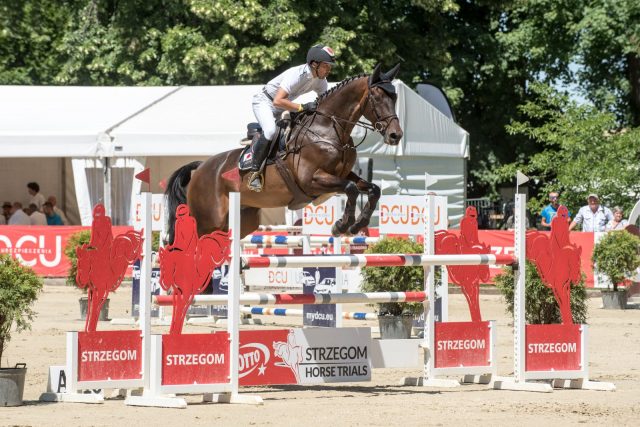 Yoshi Oiwa earned the first CCI4*-L win of his career this weekend with Bart J LRA. Building on his success on yesterday’s cross country, he and the 13-year-old KWPN (United x Parisma, by Gribaldi) who is owned by the Japanese Equestrian Federation left all the rails up, but added 1.2 time penalties to just squeak over that 30 penalty barrier. Their final score is 30.6.

Jonna’s only faults this weekend with Quattrino, a 14-year-old Swedish Warmblood mare (Quite Easy x Megahertz, by Guido), were 1.2 time penalties in both the cross country and the show jumping to finish on a three-phase score of 36.8. Ebba rode Chippieh and had one rail fall and 0.4 time penalties to finish on 37.7.