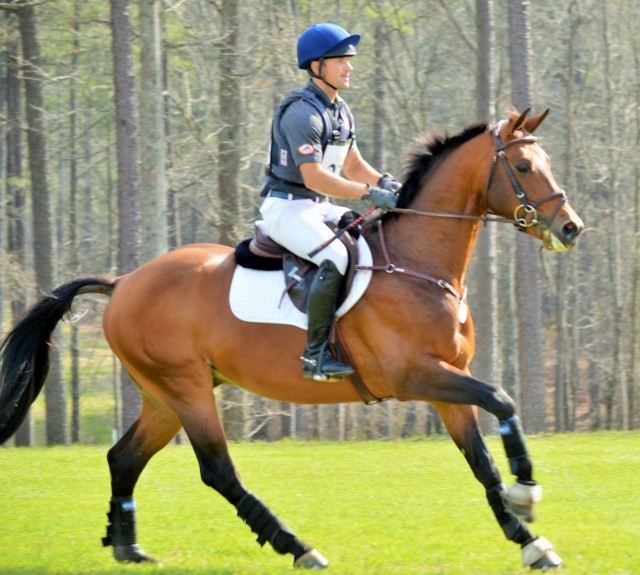 Michael Pollard and Halimey at Carolina International in 2014. Photo by Sally Spickard.

Michael Pollard and two of the Chatsworth Stud stallions, Songline and Halimey, packed a one-two punch today in the Open Intermediate B division at Rocking Horse. Songline, an 11-year-old Trakehner, won the day with a jaw-dropping 18.3, followed by stablemate Halimey, a 10-year-old Trakehner, who scored a 20.8.

Michael’s certainly no stranger to wowing the dressage judges, and he completed the day with a first and third finish with just time penalties added aboard both stallions. Halimey will take home the blue with just 1.6 time added, while Songline took third with 11.6 time added.

Buck Davidson and Quasar moved up from third to second with a quick footed cross country run, adding 2 time penalties for a final score of 27.2. Quasar was out for his second run of the year, coming off a fourth place finish in the Intermediate at Rocking Horse I last month. Buck’s remarked in the past about how professional this horse is, and he seems to have finished in top form today.

Moving up from ninth to fourth overall are Kylie Dermody and Da Vinci Code in their fourth run of the year. Da Vinci Code is an Irish Sport Horse gelding owned by Joan Nichols, and he and Kylie have enjoyed much consistency since beginning their partnership over the winter.

Fans of The Flying Deer will be pleased to see him back in action in his first event since WEG. Lynn and Donner scored a 26.7 in the dressage and added 6.4 in what was surely a walk in the park for the seasoned campaigner to round out the top five in the B division. 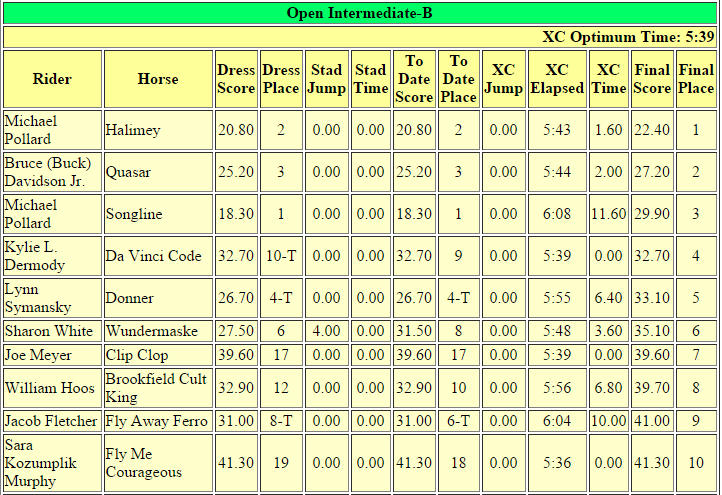 Kylie Dermody also enjoyed a top finish in the Open Intermediate A division, taking home the win aboard Lup the Loop on a final score of 34.2. This pair skipped around cross country to come home double clear. Also owned by Joan Nichols, Lup the Loop picks up his third win of the young season this weekend.

Kylie will also celebrate a fourth place aboard Cooley Ice in this division, just inching over 40 penalties after another double clear cross country run this afternoon.

Whitney Mahloch and her own Military Mind, a 9-year-old Thoroughbred gelding, made short work of their first run of the season, finishing just barely in second place on a score of 34.7. This pair had a solid 2014 season at the Intermediate and two-star level, so we can’t wait to see what’s on their agenda for the new season.

In third place in the A division are Sara Kozumplik Murphy and Delta Queen, who just stepped up to the Intermediate level at Rocking Horse earlier this month. Sharon White and Severn Sky round out the top five in fifth place after moving up from eighth after show jumping. 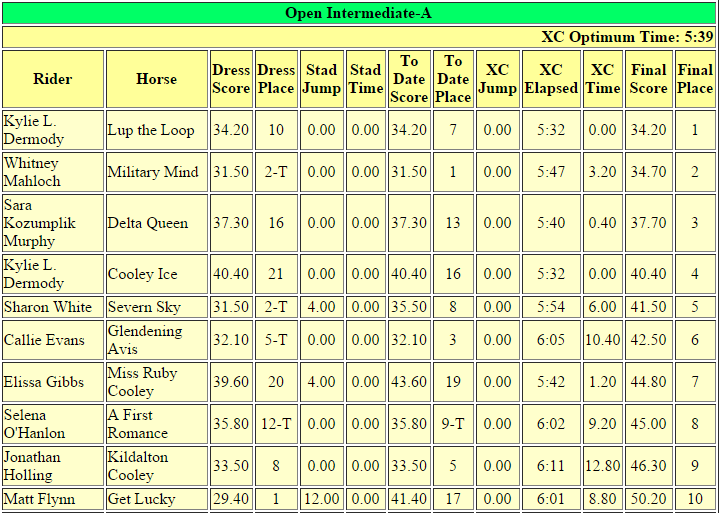 Sable Giesler was the winner of the Intermediate Rider division aboard Evil Munchkin (best name ever?). This is Evil Munchkin’s first run since completing the CCI2* at Fair Hill in the fall, and the pair added 10 time penalties to their dressage score to finish the day on a 41.3.

Rachel Wilks and River King, a former ride of Emily Beshear’s, bounded up the board from 10th to finish in second after the quickest cross country round of the division. This pair also completed the CCI2* at Fair Hill last fall and have gotten off to a great start so far in 2015.

Area IV shout-out! Jordynn Sahagian and Nestor also enjoyed a move up in the standings, shifting from sixth to complete the top three after cross country completed. This was their second run of the season; they opened up their year with a win in the Prelim at Ocala earlier this month. 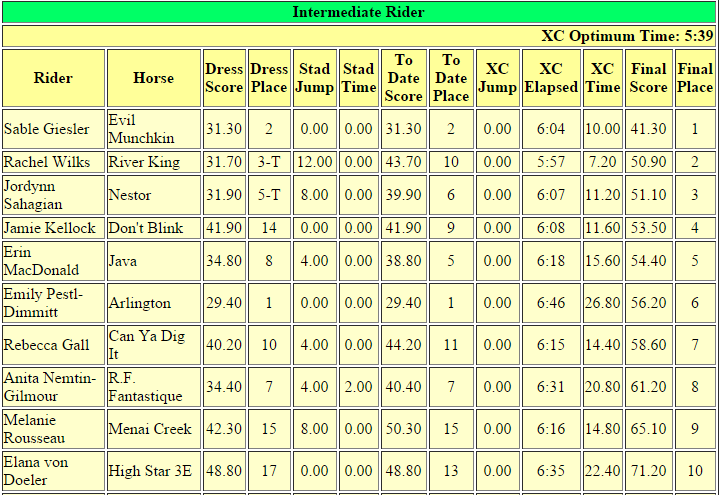 Meanwhile on the West coast, best friends Tamie Smith and Heather Morris are holding court in the A and B divisions of Intermediate at Twin Rivers.

Tamie is riding Alex Ahearn’s Mai Baum this weekend and, if her videos from schooling the German gelding with David O’Connor this week are any sign, the gelding looks to be in top form. Tamie and “Lexus” earned a 20.7 in the dressage to take the lead over Tamie’s other ride, Fleur de Lis.

Tamie and Mai Baum have been busy forming a partnership this year, as Tamie has taken over the ride for Alex Ahearn while Alex is at college. We’re sure we’ll be seeing some great things from this pair!

The Team Milton Syndicate’s Fleur de Lis is running his first Intermediate of the season, having had a good pipe opener with a win at Fresno earlier this month and will take a score of 24.4 to follow his stablemate into cross country tomorrow. 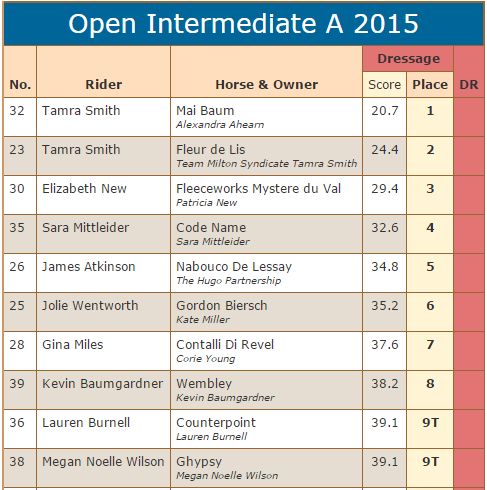 Leading the Open Intermediate B division are Heather Morris and Company Team Express’ Charlie Tango. Heather’s been partnered with Charlie Tango since he was competing at the lower levels, and they’re now out for their third Intermediate run this weekend after winning the Preliminary Horse division at AECs last fall. Charlie Tango earned a 26.1 to take into the final two phases of competition.

Tamie Smith is hot on Heather’s heels with Sunsprite Syrius, another young talent for Sunsprite Warmbloods. Syrius is making his Intermediate debut this weekend and is off to a great start with a 26.9 in the dressage. Tamie will likely be looking for education out on James Atkinson’s cross country course tomorrow.

Derek di Grazia and his own Ringwood Justice round out the top three in this division on a score of 28.7 — lots of scores in the 20s this weekend! Derek moved Ringwood Justice up to Intermediate last spring, bringing home several top 10 finishes in his subsequent starts. 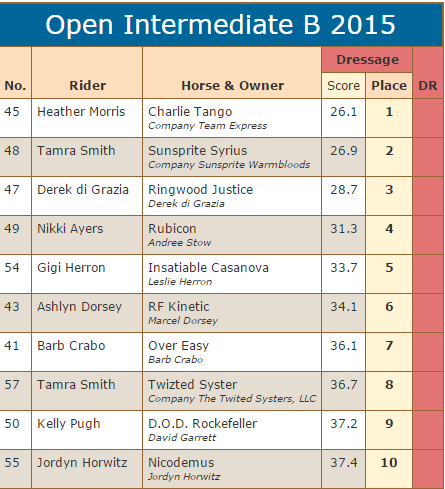