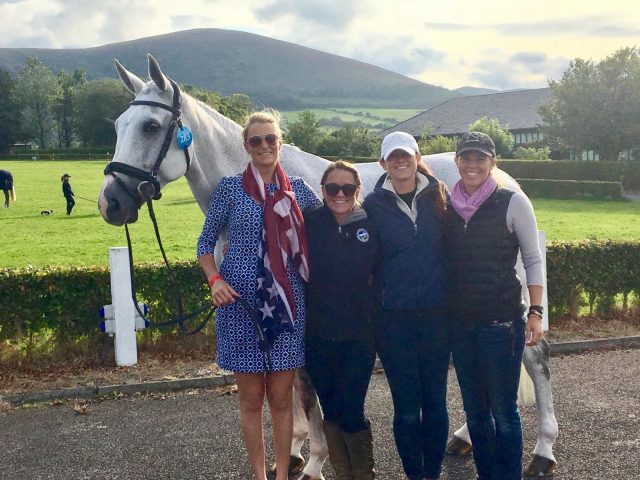 It’s been a busy day at Millstreet International Horse Trials in Ireland for our six strong North American contingent, with the CIC3* and CIC2* divisions starting dressage and the CCI first horse inspection taking place this afternoon.

First order of business: Sara Kozumplik Murphy and the Rubens D’Ysieux Syndicate’s Rubens D’Ysieux and Jennie Brannigan and Stella Artois, owned by Beth Lendrum, Cory Walkey and Elsbeth Battel, sailed through the trot up for the CCI3*.

Jennie and Stella Artois head down centerline for their dressage test at 1:42 p.m. IST/8:42 a.m. EST tomorrow, with Sara and Rubens D’Ysieux following at 2:32 p.m. EST/9:32 a.m. EST. There is no live stream, but the good news is there will be a live radio stream for cross country at this link. CCI3* live scoring is here and we will also tweet updates @eventingnation.com. 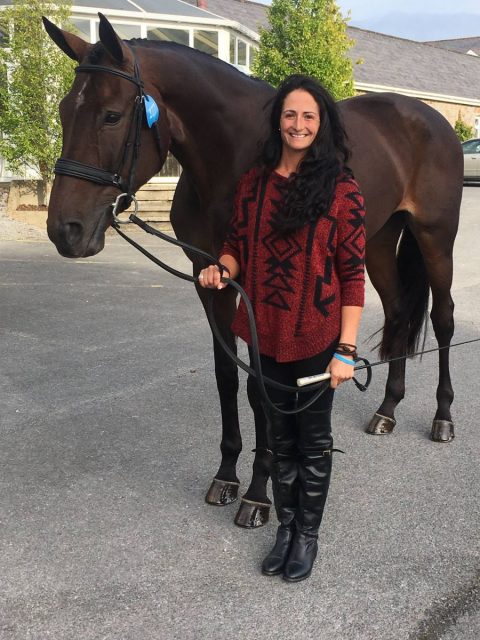 Jennie Brannigan and Stella Artois at the first horse inspection.

Cooley Cross Border stayed in Ireland after Tattersalls in May to continue competing in his native country, while Kim Severson has been going back and forth to the U.S. to keep her other horses going stateside. She was back in the States this past weekend competing at Waredaca H.T. in Maryland, then got on a plane to fly right to back Ireland to compete “Cross” in the CIC3* at Millstreet.

Since Tattersalls, Kim and Cross, a 10-year-old Irish Sport Horse gelding owned by the Cross Syndicate (Diamond Roller X Who’s Diaz, by Osilvis), have been racking up top results in Ireland, winning the Advanced at Ballindenisk last month on 29.7, and placing fifth in the Camphire CIC3* at the end of July in their final prep run for Millstreet.

Kim and Cross scored 45.2 today to sit in third place in the CIC3* at the halfway point of dressage in the 53-horse division. “The trot work was very good,” Kim told EN. “He broke in the walk and was unsettled to the canter after the turn on the haunches, but I am still very happy with him.”

Hannah Sue Burnett has also spent an extended time overseas this summer, based at Maizey Manor in Wiltshire and competing all across Europe with her string of horses. This weekend she has four competing at Millstreet, with Jacqueline Mars’ Harbour Pilot, a 14-year-old Irish Sport Horse gelding (Cruising X Shannon), sitting fourth in the CIC3* on 45.5.

“Harbour Pilot was great today. He hasn’t been out since Luhmühlen, so he was pretty happy to be at a party, but he kept it together like the seasoned pro that he is,” Hannah said. “I’m so excited to be at Millstreet for the first time! It’s a beautiful venue and everyone has been accommodating and very nice.”

Hannah is also sitting in the top five in the CIC2*, with Cooley Dream LLC’s Cooley Dream, a 9-year-old Irish Sport Horse gelding (Cruising X The Dreamseeker, by Ramiro B), scoring 45.5 to sit in fourth place after the first day of dressage. Cougar Bay, an 8-year-old Irish Sport Horse gelding owned by Jacqueline Mars and Christa Schmidt, is 23rd in the CIC3* on 55.6.

“I have to give a huge thanks to my team, owners and sponsors — here and at home — for making my job so easy and enjoyable,” Hannah said. “This weekend my plan is to have a good preparation for Blenheim and upcoming CCIs on all my horses.”

Harbour Pilot is aiming for the Event Rider Masters finale at Blenheim, and Hannah is also one of the eight Americans who will be competing at the Land Rover Burghley Horse Trials next week, riding Mary Ann Ghadban’s Under Suspection.

Hannah has a second ride in this division in Jacqueline Mars’ RF Demeter, who will do her test at 10:39 a.m. IST/6:39 a.m. EST tomorrow. Busy lady!

Kathryn Robinson and Let It Bee, her own 16-year-old Westphalian gelding, are the the sole combination at Millstreet representing Canada and scored 46.4 for seventh place in the CIC3*.

Our British-based American Katherine Coleman is still to come in the CIC3* with Back to Business II, and she is sitting in ninth in the CIC2* on 45.8 with Monte Classico, her own 8-year-old German gelding (Monte Bellini X W-Sally, by Saami xx).

EN does not have a reporter on the grounds at Millstreet this week, but our goal is to catch up with as many members of our North American contingent as we possibly can. (Please bear with us as we battle time zones and spotty cell reception. If you don’t see a quote from your favorite rider, please know the chinchillas are doing their very best to get in touch!)

For all of the Jonty Evans and Cooley Rorkes Drift fans out there, you’ll be thrilled to know that “Art” is leading the CIC3* on 40.7 despite errors — just knocking the rust off before what is sure to be a thrilling performance at the Blenheim Palace CCI3* next month.

Be sure to follow Millstreet’s Facebook page for photos, and stay tuned for previews of Mike Etherington-Smith’s cross country courses. Ride times and live scoring for all divisions are at this link. Go Eventing.