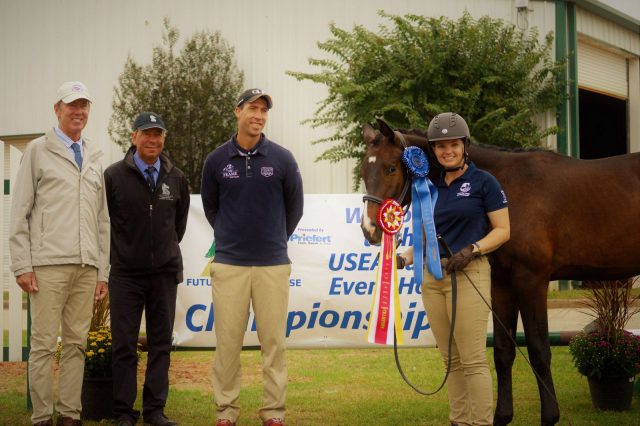 Many readers in the eventing world may be familiar with Amanda Chance and her blog The $900 Facebook Pony. The title is pretty self-explanatory. In December of 2013 Amanda purchased “Henry” off a Facebook ad, sight-unseen, for a grand total of $900. Her blog chronicles their journey together, posts product reviews, nerds out about bloodlines and reports on all things eventing. In 2017 Amanda welcomed a new addition to her herd, and that is where this story begins.

On March 16, 2017 at exactly 3 p.m. on the dot, Like Magic WTW entered the world. “Presto” is Amanda’s second generation of homebred horses. In 2007 Presto’s dam Westbound (“Sadie”), by the stallion Westporte (Wolkentanz x Fabriano), was born. Initially intended to be Amanda’s amateur friendly, hunter horse, Sadie was kicked in the leg while out in the field and retired to broodmare life earlier than Amanda had planned. With the purchase of Henry and Amanda’s transition back to eventing, she once again had the desire to produce her own foal but this time with the intent of producing an upper level eventer. 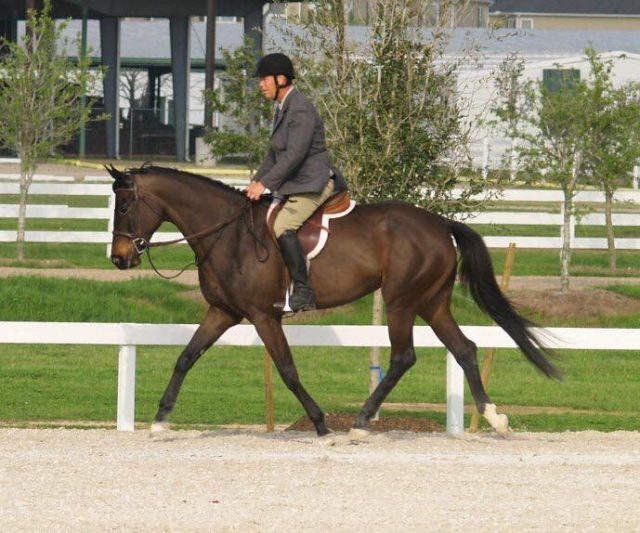 Meanwhile Sadie had been leased out to Willow Tree Warmbloods as a broodmare. A deal was made that Sadie would become a permanent resident of WTW in exchange for Amanda getting a foal from her. The search for the perfect stallion began. In the spring of 2015 Amanda traveled to Belgium for the SBS Stallion Selection Show. Amanda had enlisted the help of eventing breeder and broker, Baudouin van den Brande. Together they went around to many different farms and looked at lots of young horses.

“At Kai Steffen-Meier and Lara de Liedekerke’s barn I fell in love with a 4 year-old gelding in particular,” says Amanda, “a horse named Max who was by the stallion Mighty Magic.” 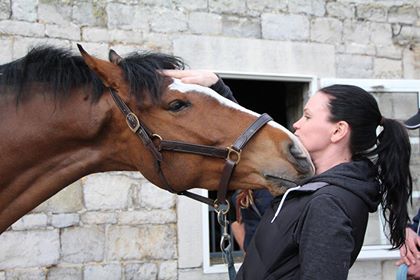 Amanda and Max the Mighty Magic foal that stole her heart. Photo courtesy of Amanda Chance.

They saw several more Mighty Magic (Mytens xx x Neika I) foals on their trip, all out of very different mares and all capturing Amanda’s attention. Being diligent in her research, Amanda sought the advice of several different breeders who had used Mighty Magic and received glowing reports. Once back home, Amanda spent the rest of the year “obsessively” looking up every Mighty Magic offspring she could find and tracking their damlines and performance records.

“Everything I found made him seem like a better and better match for my mare,” recalls Amanda, “so in 2016 we bred Sadie to Mighty Magic.” 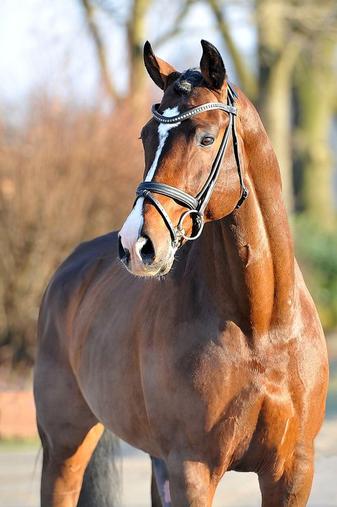 When Presto hit the ground in 2017 it was love at first sight. “I know it sounds hokey,” says Amanda, “but from the second I first saw that little white foot and nose poking out, I was head over heels in love.” Presto was a strong little foal and was nickering even before he was all the way out of Sadie. He stood up almost immediately and within an hour was trotting around his pasture exploring his new world.  Presto seemed perfect and had all the makings that a day old baby can have of an eventing super star. 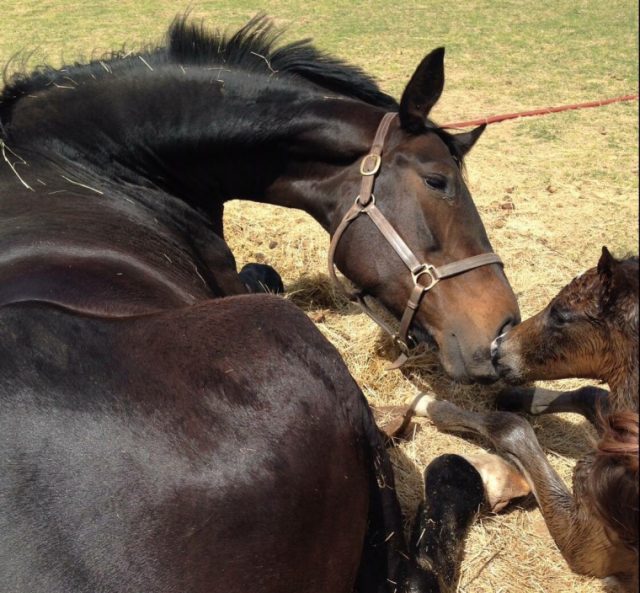 Two days later the narrative did a complete 180. At 4 p.m. on Saturday, March 18, Presto was cantering around, bucking, playing and acting like a normal foal. Within a matter of hours Presto developed a severe case of bloody diarrhea and it was apparent the little foal was very sick. Presto was rushed to the Brock Veterinary Clinic about an hour away. By the time he was unloaded off the trailer Presto could barely stand. The veterinarians were not optimistic. They hypothesized Presto either had clostridium difficile or clostridium perfringens infection. Both are bacteria found in the intestine that release toxins and can cause enterocolitis — inflammation of the intestines and colon. The disease is rapidly progressive and has a very high mortality rate. After testing it was determined Presto had both C Diff and C Perf.

For the next two weeks Presto’s life hung in the balance. His white blood cell count was double of what would be considered dangerous. His bloodwork was all over the charts, with his proteins going dangerously low and his electrolytes shooting from one extreme to the other. The clostridium caused necrotizing enterocolitis, meaning the top layer of his gastrointestinal tract tissue had been killed off. Presto could barely nurse and was basically being kept alive on IV fluids and plasma. Through it all Presto continued to keep his kind friendly nature, never getting tired of people coming in to poke and prod him and laying quietly with Amanda when she would come sit with him. 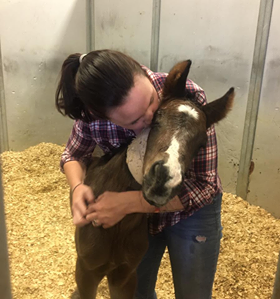 “Even on his worst days, he never seemed to give up,” recalls Amanda, “as long as he did that, I felt like he deserved every chance we could give him.”

The first real ray of hope came over two weeks after Presto fell ill. Dr. Kari Bevevino, Presto’s main vet, texted Amanda a picture of something that looked like a cow patty. Presto had his first semi-solid, non-liquid poop since his ordeal began and it meant his GI tract was starting to function normally again. “That was the day I took my first deep breath since the night we dropped him off at the clinic,” says Amanda.

Presto continued to improve over the next several weeks, achieving one medical miracle at a time. On Friday, April 7, Presto got to come home. Since then Presto has been living up to his name, Like Magic, and growing into a handsome young colt. Amanda brought Presto to live at the same boarding barn as Henry soon after Presto’s first birthday. Henry has been taking his big brother duties very seriously, teaching Presto, sometimes begrudgingly, the ropes of being an internet celebrity and an event horse. 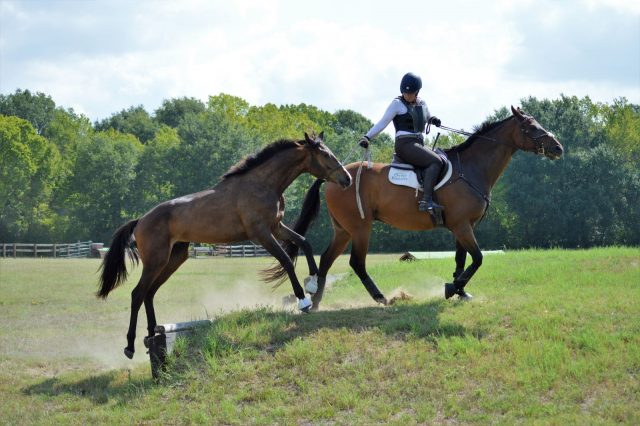 Amanda took Presto to his fist FEH event at the Snowdonia Farms qualifier in June where he received his qualifying score for FEH Championships.  And so Amanda and Willow Tree Warmbloods owner Michelle Beck loaded up and took their miracle baby to Texas Rose for the 2018 USEA FEH Central Championships. “It was meant to be a celebration of what Presto has done so far and the fact that he’s still with us,” says Amanda, “I certainly never expected him to win!” 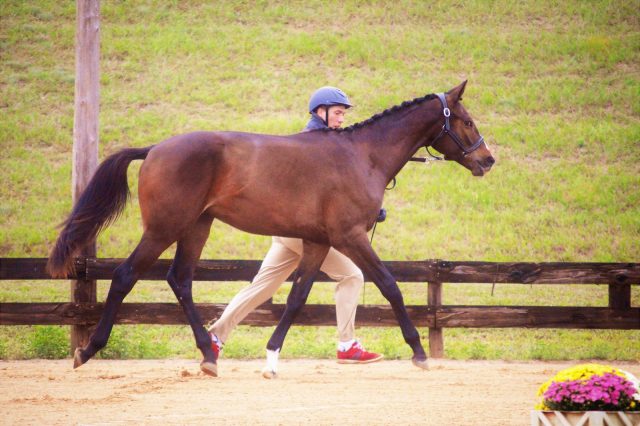 Like Magic WTW strutting his stuff at the 2018 USEA FEH Central Championships. Photo by Kate Boggan.

Presto went from a baby on death’s doorstep to an FEH Champion claiming the title of Champion Yearling Colt and Reserve Champion Yearling Overall. Amanda’s plans for Presto’s future? “I’m planning to keep taking him up through the FEH program to get some life experience under his girth,” she says, “Ultimately I want him to be my next event horse and I’m hoping he feels up to packing an amateur around a 2* one day.” While Presto had a scary start to life, Amanda’s dedication to the sick foal brought him through to the other side. “There’s no doubt that I’m his person and he’s my horse,” says Amanda. With a bond that strong, the sky’s the limit for this duo and we look forward to following along with their future successes.