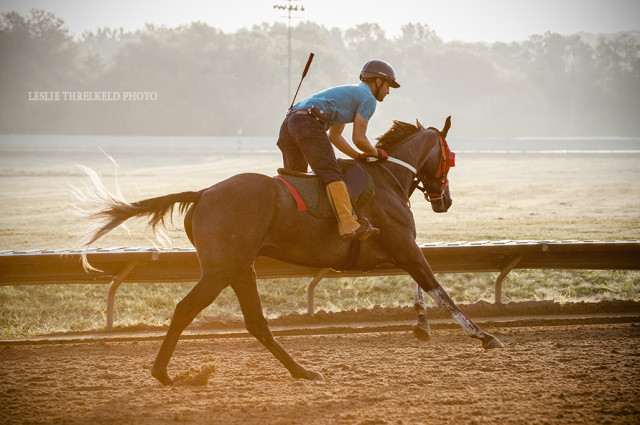 A gallop in the orange glow of morning. Photo by Leslie Threlkeld

I might say that I was feeling far from the action during Burghley this weekend, but thanks to the power of social media I was able to follow along with the U.S.-based riders’ progress while visiting a Midwestern racetrack. On the long drive home yesterday, we tuned in to the live blog for the top ten or so riders and tried to list all of Jung’s major wins while he racked up yet another one. As for our trip, we watched a ton of nice Thoroughbreds doing what they do best, fell in love with a few and brought a couple home. Who knows? Maybe like Donner and Anthony Patch, Burghley may be in their future. Go Thoroughbreds.

A spectator’s Burghley blog. Area III eventer Shelby Allen blogged about her experience as a first-time spectator at Burghley. She and her mom traveled from Georgia to England  (experiencing quite the weather difference!), enjoyed watching some amazing horses compete and had a few personal funnies to share. [Dressage Blog] [Cross Country Blog]

Michael Jung wasn’t the only German to bring home a top prize. Ingrid Klimke was at Burghley to accept her $40,000 award for winning the FEI Classics series. She’s the first German rider to win the award, which she earned through wins at both Pau CCI4* and the Luhmühlen CCI4* as well as a second place finish at Badminton. Her countryman Michael Jung just so happened to finish second in the series, taking home another $30,000 in addition to his Burghley winnings. [Ingrid Klimke is thrilled]

Simon Grieve and Cornacrew finished Burghley for the fourth consecutive year. British rider Simon Grieve and the now 16-year-old Irish Sport Horse have entered and completed Burghley every year since 2012 and jumped clear on cross country three out of those four attempts. He blogged about the weekend with his beloved “Bozzie Buckley.” [Simon Grieve on Horse and Hound]

Suspension lifted. Hunter rider Brigid Colvin was suspended by the USEF when a horse she was riding tested positive for GABA at last year’s International Hunter Derby Championships. After filing a civil suit against the USEF, however, the seven-month suspension effective September 1, 2015 has been temporarily lifted. [Brigid Colvin vs USEF]