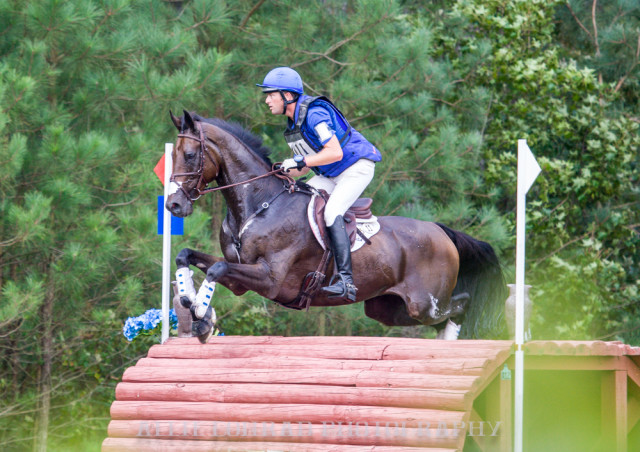 Will Faudree and Hans Dampf before their fall at Five Points. Photo courtesy of Allie Conrad Photography.

Will Faudree is resting comfortably at Duke University Medical Center in Durham, North Carolina, after undergoing surgery on his neck yesterday following his fall with Hans Dampf on the Advanced cross country course at Five Points Horse Trials on Saturday. Hans Dampf was uninjured in the fall.

Will broke the C6 and C7 vertebrae in his neck, and a surgical team led by Dr. Melissa Erickson operated on two sections of his spine, fusing his C6 vertebrae to C5 and his C7 vertebrae to T1 to stabilize the injury. The surgeons were also able to relieve nerve pressure to restore feeling to the left side of Will’s body, which he lost in his left arm, hand and leg following the fall, Will told EN this morning.

The fall occurred at a large white table set in water that Hugh Lochore also used on the CIC3* course at Carolina International Horse Trials earlier this year (click here to see a photo of the fence). Will had already jumped the Advanced cross country course clear with Pfun earlier in the division and was having a good go on Hans Dampf before the fall, he said.

“I was having a fantastic round on Hans Dampf, and where I had the fall could have happened to anyone. I was a little bit unsure of how he was going to go into the water. Pfun had stepped into the water and then taken one stride to the table, and Hans jumped the lip of the water, went to jump the table and realized how wide it was. He clipped it with his toes on the way down, and we both went down,” Will said.

“I did a somersault off over his head, and my air vest didn’t go off until he went down. It was an unfortunate bummer of a mistake, and it was not the horse’s fault. He’s amazing, and I can’t wait to get back out there to ride him again. He gave me a fantastic ride up to that point. It’s a part of the sport, and it was a fall that can happen any day. It’s how you hit the ground that defines your injury.”

Hans Dampf is Will’s newest ride, having been imported from Germany in June. Now owned by Jennifer Mosing and Sterling Silver Stables, the 9-year-old Oldenburg gelding by Heraldik xx formerly campaigned with Andreas Dibowski through the CCI3* level in Europe. “Hans” finished ninth at Boekelo CCIO3* last year and also won the CICO3* at Malmö.

Will and Hans were competing in their second competition together at Five Points; they finished third in an Advanced/Intermediate division at Full Gallop Farm’s August Horse Trials last month. Five Points was meant to be the horse’s final prep run before contesting the CICI3* next week at Plantation Field International Horse Trials, where Will was entered to compete four horses.

Now Will is planning for all of his horses to go on a competition break this fall, focusing instead on their fitness work and training with his dressage instructor, John Zopatti. Will hopes to be released from the hospital later today to begin his road to recovery and ultimately getting back in the saddle.

“I’ll be back out there again; it’s going to be awhile,” Will said. “I’m very fortunate and very lucky to have the support from Jennifer Mosing and all my friends and family that have been here to help me through this. I also want to thank my great surgical team led by Melissa Erickson at Duke Medical for piecing me back together.”

We’re wishing Will all the best for a speedy recovery.