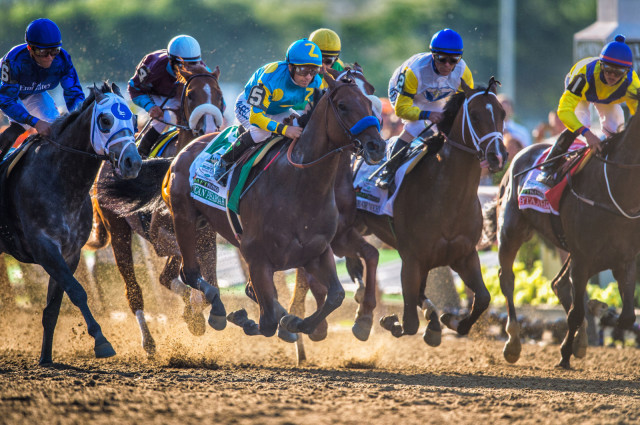 American Pharoah at the start of the race at Belmont. Photo by Diana Robinson via Flickr/Creative Commons.

It seemed like some sort of joke when American Pharoah, the first Triple Crown winner in 37 years, was denied the Sports Illustrated Sportsman of the Year award for 2015. He was the runaway favorite (pun intended) amongst readers, but the editors disagreed. This weekend, however, he was unanimously voted Horse of the Year at the prestigious Eclipse Awards for Thoroughbreds. Many horses come close, but we may not see another Triple Crown winner for another 30 years, if ever. The honor was expected but justly deserved.

American Pharoah was retired to the breeding shed after the Breeder’s Cup Classic last fall, so there is an interest in riding the momentum of exposure the stallion brought to racing on his road to glory. The numbers don’t lie, with television ratings and auction prices increasing significantly in the wake of his success. Bill Thomason, president of Keeneland Race Course, says fans mustn’t mourn AP’s retirement, but ask instead, ‘Who’s next?” [With Triple Crown Winner at Last, Sport Aims to Ride the Momentum]

George Morris’s autobiography will be released in March this year and promises to offer an up close and personal look into his life with horses. Publisher Trafalgar Square Books shared a sneak peak of “Unrelenting: The Real Story: Horses, Bright Lights, and My Pursuit of Excellence” self-narrated by George himself. [George Morris Autobiography]

At age 69, Canadian show jumper Ian Miller is aiming for a record 11th Olympic Games. His first Olympics were in Munich in 1972, though he only has one medal to his name, having earned team silver in Beijing in 2008 when he was 61. Ian is probably best known for his inspiring partnership with Big Ben, a very tall Belgium Warmblood with whom he won over 50 Grand Prix titles. [Ian Miller Aims for Record 11th Olympics]

Andrew McConnon is heading to Europe, having accepted a position riding at William Pox-Pitt’s yard. Andrew has been an active supporter of CANTER, and was given hearty well wishes from the organization upon the announcement of his departure. “He could bring along a thoroughbred as beautifully as anybody I’ve ever met.” [Good luck, Andrew!]