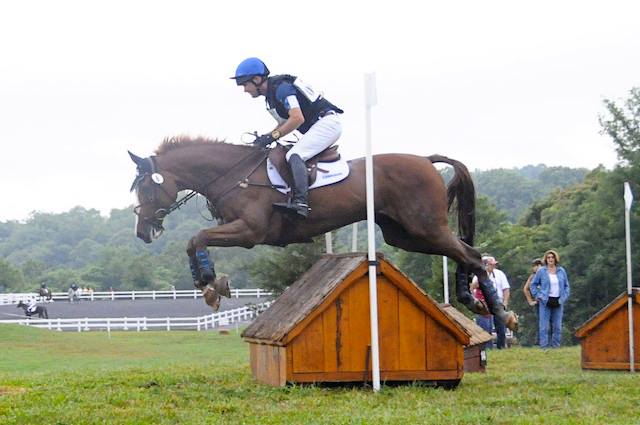 Good morning, EN! I’m still buzzing about my weekend at the Maryland Horse Trials; I took my partner of almost ten years out for our first Training event ever. I’m not one for emotional displays, but bringing home my 20-year-old horse clear around XC choked me up pretty good. I came home with a good number of things to work on [reading Kate’s post cemented my decision to go to a dressage show], and a lot to be excited about. To the organizers of the event: well done, it was on-time, and the services towards riders and spectators was top-notch. I almost died when someone offered to carry my tack back to the trailer after cross-country. Thank you, to all the organizers and volunteers!

Champagne Run at the Park

Phillip Dutton competed for the first time with Mr. Medicott, Karen O’Connor’s Olympic ride, at the Maryland Horse Trials in Intermediate. He finished eighth in his division. There were many big names at the event, Jan Bynny won an Intermediate division with Syd Kent, Buck Davidson won on Mar De Amor and D.A. Adirmo, and Boyd Martin made his competitive comeback after injury, riding New Cadet in Preliminary. [MDHT Results]

Zara Phillips is still riding strong into the fourth month of her pregnancy. The British Olympian will reportedly stop riding after the British Festival of Eventing at Gatcombe next month, where the annual Championships are held. Please excuse the horrid headline, as it is British tabloid fare. [Express UK]

Tiana Coudray writes about the Aachen experience, and her hopes for Finn after a great spring season. It’s clear that she and the rest of the world are excited about Finn and his continued improvements since London, and  we’re excited with her to see what comes next! [My Aachen Experience]

Eventing Worldwide has a report from Upton Horse Trials in Oxfordshire, where many top riders in the area were competing their young horses, including Andrew Nicholson, Oliver Townend, Pippa Funnell and Lucinda Fredricks. Also included are some top notch photos. [Eventing Worldwide]