I just got back in from an awesome weekend at Fresno County Horse Park and the thought of putting everything away is just exhausting. We had so much fun even though I got at least three people addicted to what-would-i-say.com. 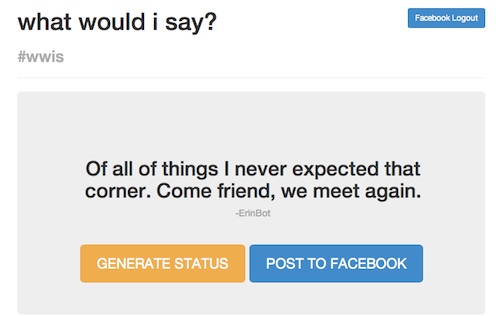 At dinner, Team DF spent at least half an hour laughing at the dumb things that this app was spitting out.

Traditionally, for about three days after an event my SUV looks like a small scale, equestrian themed Hoarders episode. I would seriously pay a ridiculous amount of money right now to have someone unpack and put away all of my gear.  With the end of the show-season here for me, I suspect my SUV will be in the Hoarders-esque state until at least the weekend.  On the upside, the folks that ride in my vehicle from time to time know the post-show look well and will be more likely to ask “Oh, so how was the show?” than be creeped out.  Gotta love horse people.

Adelaide CCI4*, Australia’s International Three Day Event wrapped up on Sunday – or Saturday night, depending on where in the world you are.  It takes a lot to be competitive at the 4* level, even more to win.  You will have to add in some luck if you want to do it on a catch ride, which is exactly what Chris Burton did aboard TS Jamaimo.  [More From EN]

Carla, from our sister-site HorseNation, shared some wonderfully bad training advice from 1876.  I thought teaching my horse to give high-fives and fist bumps was cool, but now I’m seeing that I could have done so much more.  I could have taught her how to “drive a boy off of a pedestal”.  Then again, i’m sure if you ask my husband, she’s known how to do that for quite some time.  [From HorseNation: ‘The Horse’s Friend’ or, ‘How Not to Train Your Horse’]

The Tennessee Walking Horse is in the spotlight again in Congress. A subcommittee in the House of Representatives held a hearing on HR 1518, the Prevent All Soring Tactics Act (PAST), sponsored by Rep. Ed Whitfield, R-Kentucky.  While I’m not likely to ever become a TWH owner or attend a TWH show, I still have some pretty strong opinions about what should happen to trainers and owners of horses who are abused in the manner that is sadly all too common in that industry.  Safe to say, those opinions are probably not best suited for print.  [More on the hearing from shreveporttimes.com]

Apparently you can get away with horse abuse if you just stop showing up in court. Janice Hickerson was charged with 21 counts of animal cruelty back in July and had 25 horses seized at that time.  This past weekend Spokane County Regional Animal Protection Service (SCRAPS) returned to her property and seized an additional 63 horses.  Eleven of those horses were in critical condition.   Hickerson is still  facing on felony charges from the seizure in July and now has a warrant out for her arrest.  The police apparently don’t know where she is because she stopped showing up in court.  Lets hope they catch her soon. [More from khq.com] [Additional Information from king5.com]

As Eventers, we already know that Jockeys and Drivers have one of the most dangerous jobs in the world.  Many Jockeys and Drivers are seriously injured each year and deaths do occur on the race track.  Sunday night at Harrah’s in Chester, Pennsylvania, a four-horse collision during a race caused one of the drivers to be ejected from his sulky, in to the air and then trampled by a horse. At last report, the driver is in critical condition. [More from WPVI]

The Devon Horse Show is one of the longest running horse shows in the United States.  The horse show’s board of directors held an emergency meeting recently over concerns that its president, Wade McDevitt, put together a plan to build a hotel, shops and a parking lot on the showgrounds.  While I’m not opposed to development and having great amenities at a horse show, there appears to be quite a bit of money-grabbing and shadiness going on here and it has me worried.  [More from philly.com]

Sunday Video: I think I might be some kind of hipster because I’m the only person that doesn’t find this stupid song funny.  Even old people like it.