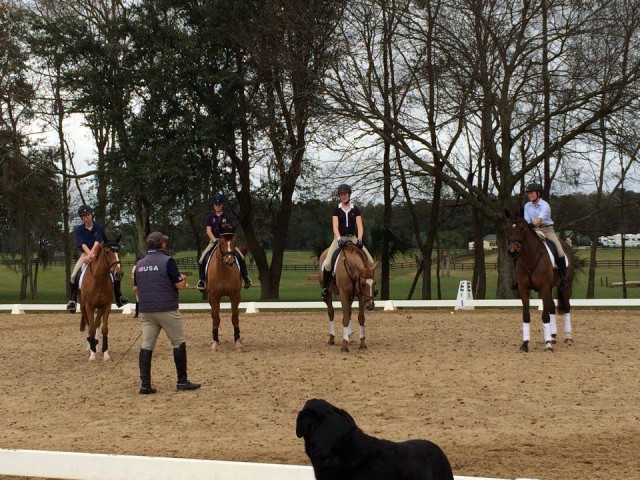 Ugh, good morning EN.  I hope you are feeling better than I am.  I have officially crossed over from “sick enough to call in to work” to “sick enough to skip going to the barn as well”.  I’m sure you all know exactly what that feels like.  I will undoubtedly watch a bunch of terrible movies on Netflix today while eyeing the weekend’s photos from the  Eventing 18 clinic on Facebook.  I might even daydream about going on a hack in a DayQuil haze.  I hope your plans are more exciting than mine!

The removal of a helmet has cost Brazilian rider Carlos Ribas his win in a six-bar competition.  Ribas and Pelvin Z cleared a 2.05 meter fence to clinch the win.  After clearing the fence, Ribas removed his helmet and threw it in to the air.  He then jumped two additional fences.  This is what caused the FEI to eliminate him from the final round causing him to drop to fourth place.  [More from NoelleFloyd.com]

Endurance is in the spotlight again after an Ecuadorian rider received a formal warning after the horse she was assigned to ride in an FEI-sanctioned event tested positive for bute and flunixin. Maybe I’m jaded, but it really seems like at least every other month there’s something coming out about FEI level Endurance and doping.  Does this mean that Endurance has more problems or that other disciplines are better at hiding it? [More from Horsetalk.co.nz]

Police are on the look out for whomever set fire to a riding arena in Union Township, Penn.  No animals were harmed and no structural damage occurred, but it is still scary to think of what could have happened.  [More from Eveningsun.com]

Mayor-elect Bill de Blasio is planning on banning NYC’s iconic carriage rides soon after taking office citing inhumane conditions.  The plan is to replace the horse drawn carriages with antique-styled electric cars.  The possibility of a ban has caused an uptick in business for the carriage drivers. [More from NYDailynews.com]

The largest known dinosaurs may have had some horse-like traits according to researchers.  Researchers suspect that the Argentinosaurus may have had stay mechanisms, a set of ligaments and tendons that are passive when the animal is at rest, similar to horses. [More from horsetalk.co.nz]

Jimmy, half-brother to brilliant Australian race horse Black Caviar, was euthanized yesterday.  Jimmy was the most expensive race horse in Australian history having been sold as a yearling for $5million AUD.  In November, Jimmy suffered a spider bite and had a serious allergic reaction to the antibiotic treatment.  As a result of the reaction he developed laminitis.  [More from Examiner.com]