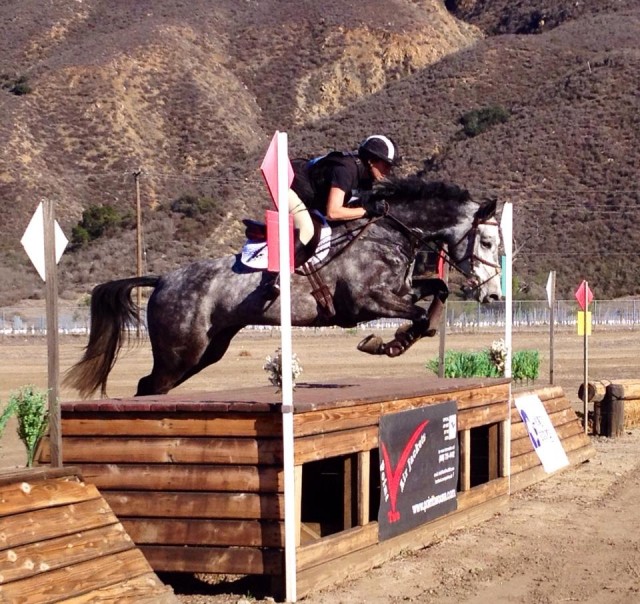 Winner of the Open Preliminary division at Galway Downs this past weekend, Robyn Fisher. Photo by Bill Olson

What a great weekend!  I almost need another weekend just to recover from the weekend.  The West Coast was positively vibrating with activity and it doesn’t appear to be stopping any time soon, but it does have the potential to be interrupted.  Ladies and Gents of EN, consider this your official eleven day warning for Valentines Day. This year it falls on a Friday, which is a prime horse-showing day. You can certainly work this to your advantage. Your significant other may want to do something sweet for you, like a romantic dinner.  This year, don’t be afraid to ask for what you really want: someone to hold your water for you and take video during your ride as well as to hold your horse when you have to make a bathroom stop.  That sounds like a lot, but the way to sell it is all in the phrasing: “You know what I’d -really- love?  If you came to the horse show and then we went to dinner together, afterward.”  Careful though, this request usually only works once.

The FEI has finalized the officials for the 2014 WEGs in Normandy.  Gillian Rolton of Australia will serve as the President of the Ground Jury.  Other members of the Ground Jury are Alain James (FRA) and Ernst Topp (GER).  The TD will be Alec Lochore (GBR), assisted by Ataid Pereira (BRA).  Course designer Pierre Michelet (FRA) and chief steward Jürgen Petershagen (GER) round out the ist of officials for eventing. [More from TheHorse.com]

Everyone is talking about the Budweiser commercial, even non-horse people.  If you’re curious about what goes on behind the scenes to shoot a commercial like this, check out this article from the LA Times. [More from TheLATimes.com]

It’s kind of odd that Ocala thinks of itself as the Horse Capital of the World, yet is not home to any race-meets.  David Miller makes some interesting points about the benefits and challenges of bringing racing to Ocala in an opinion piece. [More from Ocala.com]

Emerald Downs is buzzing with activity once again.  Training has begun for the 2014 racing season.  Over two hundred horses are reported to be on the grounds already.  This is expected to rise as April approaches.  Sounds like a fine time to swing by with a trailer and check out some OTTB prospects!  [More from CourierHerald.com]

Remember China’s first Olympic equestrian, Alex Hua Tian?  He was recently interviewed by CCTV regarding horses and his riding career.  He has high hopes that more people in China will become involved in horse sports.  [More from CCTV.com]

It’s that time of year.  Various national organizations are making the needed adjustments and changes to their programs in an effort to be competitive on the world stage.  Even the best programs can continue to get better.  NZ Eventing has had some recent changes, including the appointment of Penny Castle as the Performance Director.  This is an entirely new role within the NZ Eventing community. [More from Scoop.co.nz]

Monday Video:
Most horse-people take Monday off, but that doesn’t mean you can’t take a lesson… from Goofy.