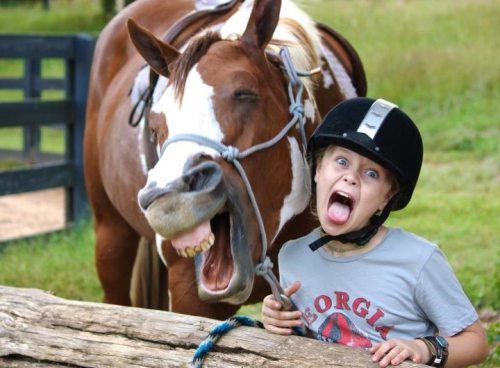 One of my coworkers emailed me this photo from The Chive with the message 'This is what I picture you and your horse doing.'

Good morning, EN readers! Can you feel autumn in the air? Apparently my horse can, because in the span of a week he went from being sleek and shiny to resembling a wookie. I think we might go as Han Solo and Chewbacca for Halloween, what do you think? Hairiness makes me think about clipping and clipping makes me think about blanketing, and how much is too much. Last year my trace-clipped boy was the least blanketed horse in the barn. For the life of me I’ll never know why all the furry unclipped horses had 12-stage blanketing systems.

Andrew Nicholson won big at Boekelo this weekend, taking the top spot from Michael Jung after Michael dropped two rails in stadium. Clarke Montgomery was the highest placed US rider with Universe; he finished the weekend in 22nd. [Boekelo Results]

Karen O’Connor is back at home, and while she might not be comfortable, she’s already starting in on her physical therapy. If I were her I’d take the time in bed to rediscover a love for peanut butter straight from the jar and perhaps watch the first season of Revenge. It’s JUST a suggestion. [Welcome Home Karen]

A horse show in upstate New York is garnering interest for lacking, well, horses. The ‘riders’ are judged just like they would be in the jumper classes, but they have the advantage of not having to tell a horse what to do. Some of them jumped over four feet in the high jump. I’m pretty sure I don’t even want to do that with my horse. [Wall Street Journal]

Possibly one of the best photo series EVER, Riders 4 Helmets demonstrates why you should always wear a properly fitting helmet. The photographer caught French rider Phillipe Fournier lose his helmet not once but TWICE on course, once during a nasty fall that also revealed his airvest was not attached to his saddle. Come on people, you’re smarter than this. [Riders 4 Helmets]

The Patriot News of Pennsylvania sat down with Reed Kessler to preview the upcoming Penn National. Her favorite part of the Olympics? Trying on clothes. Disappointed to not win a medal? Only kinda. What’s it like being in sync with a horse? Like having a girlfriend or boyfriend. Hmmm… [The Patriot News]

Oh boy, Cesar Parra is in trouble again. After skipping out on court ordered mediation after charges were leveled on him over a horse sale gone awry, another suit was brought up by a former client claiming negligence after her horse was injured in training. THEN Parra counter-sued for claiming she was scheming to keep him out of the Olympics. DRAMA! INTRIGUE! It’s all part of ‘As The Horse Pirouettes,’ a new soap opera premiering this week. Hopefully on Univision. [NJ Star Ledger]

A quick look at the Horse of the Year candidates. ESPN claims it’s down to three: Game on Dude, Wise Dan, and I’ll Have Another. I just hope it’s not Mucho Macho Man, ’cause I bet on him in the Belmont last year and lost 20 bucks. He’s dead to me. [ESPN]