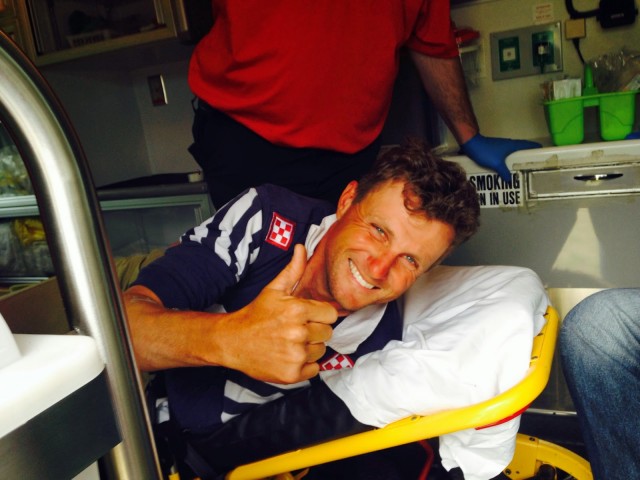 Even with a busted leg, Boyd's in good spirits. Photo by Amber Heintzberger

A thrilling weekend of CIC’s at Poplar Place and Carolina International is all wrapped up! Stellar events were put on by both sites and a grand time was had across the land.  Carolina International did net one serious injury.  On Sunday, Boyd Martin took a spill from one of his young horses, Steady Eddie, resulting in a broken leg. The EN Staff sends their best wishes to the Martin camp, both for Boyd and Silva’s speedy recovery. [More from Boyd and Silva Martin’s Blog]

Ocala is widely known as one of the major hot-spots in the United States when it comes to all things horse related.  However, the horse industry is often very insular and hard for non-horse people to acclimate to.  There are some very interesting thoughts as to how to make the thriving Ocala horse community more accessible in hopes of turning non-horse people in to equine enthusiasts. [More from Ocala.com]

‘50-to-1’, the movie about long shot winner Mine That Bird, is out now.  It has yet to see a wide release, so it may not be in your local theater just yet.  The film makers and actors have been on tour to support the movie as has the horse at the center of the story.  Mine That Bird appeared at Sunland Park Racetrack and Casino before the Sunland Derby over the weekend in support of the film.  [More from KRQE.com]

Photographer Alec Thayer, who will be shooting photos for EN at Rolex this year, also has the opportunity to go to Aachen this summer. He’s raising money to fund the trip, and if we help him raise the cash, we’ll benefit by seeing all his lovely photos from the event on EN! [Help Alec Get to Aachen]

The Swallows Day Parade in San Juan Capistrano, Calif. had some equine related tragedy over the weekend.  A miniature horse pulling a cart bolted, dumping it’s driver on to the street.  A pair of horses spooked earlier in the day, at the start of the parade, heading in to the crowd and injuring three people. [More from patch.com]

The British horse racing industry has some stormy seas ahead. Only 647 national hunt foals were born in the UK, compared with 2400 in Ireland.  With less horses being bred in the UK, concerns are emerging about the ability of the industry to support itself. [More from Telegraph.co.uk]

The first charges in last year’s horse-meat scandal have been issued.  Two members of the slaughterhouse management team are the first to see criminal charges.  Peter Boddy, slaughterhouse owner and David Moss, manager of the affected facility are both charged with breaching food regulations.   [More from dailymail.co.uk]

From HorseNation: Are you or one of your friends horse shopping?  There is certainly a secret language when it comes to advertising a horse and Carla is ready to help you with a decoder ring of your own. [More from HorseNation.com]

Monday Video: Here’s to hoping we see Boyd back in action like this soon!