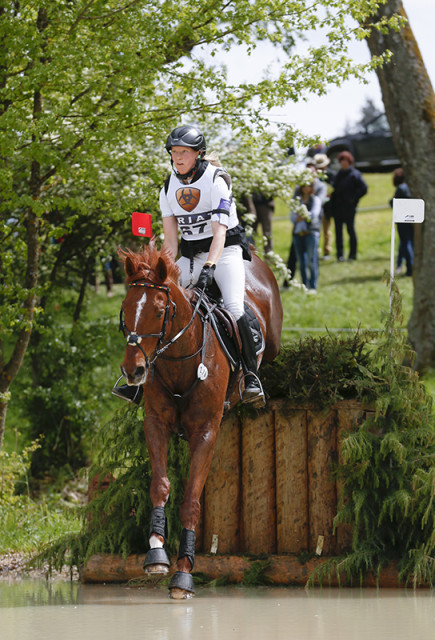 And just like that, the WEGs are over and I’m already looking forward to the 2018 WEGs in Canada. I have to admit that I’m very glad that the WEGs coincided with a three-day weekend because I know more than a few people that have put their sleep cycles seriously out of whack in the name of watching a little FEI.tv. While it’s a relaxing day for those of us on a three-day weekend, the riders, grooms and support crew are still very busy in France. I don’t even want to imagine the insanity that is preparing to depart from an event like WEG. I have enough trouble making sure I’ve taken everything with me when I leave the barn for the night.

With the 2014 WEG champions crowned, it’s time to sit back and review the tape and begin the armchair quarterbacking in earnest. It’s also time to start wringing our hands about whether or not we’ll be sending a team to Rio. [Stage Set For Pan Ams Battle to Qualify for Rio Olympics]

Plenty of celebrity spotting happened at the Hampton Classic over the weekend. James Lipton from ‘Inside The Actor’s Studio’ has attended the show every year since it’s inception, even after having given up riding ten years ago. Matt Lauer, Rudy Giulliani and Gayle King were also in attendance. [More from newsday.com]

I love brain-rotting television as much as the next person, but I’ve successfully avoided MTV’s Teen Mom series up until this point. Apparently, Teen Mom 2’s Leah Calvert is now a horse owner in addition to a teenage mom. It sounds like the horse is intended primarily as a therapy horse for her handicapped child. I may have to check this show out after all. [More from starcasm.net]

New Mexico State mascot Pistol Pete plowed over a student in the endzone during the season opener against FCS Cal Poly. I have to admit, I am not sure who to blame here – the rider for picking a poor line or the student for being utterly oblivious to the fact that A HORSE IS GALLOPING PAST. [More from usatoday.com]

Are we about to see changes in horse-racing? Other major racing jurisdictions ban race-day medications, but in the US the use of Lasix is still permitted on race day.  Currently there is a push to phase out the use of Lasix in the US by prohibiting it’s use in two year old races starting next year and eventually pushing to all races the year after. [More from the guardian.com]