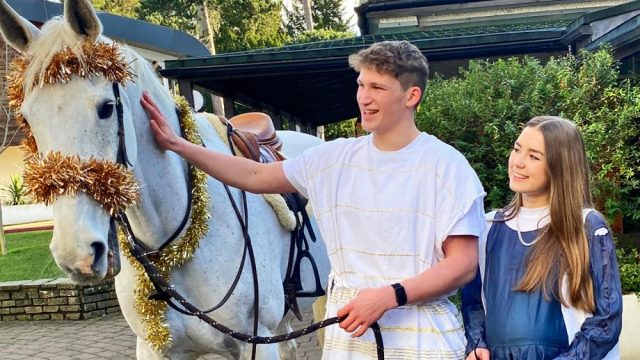 The happiest of holiday seasons from Kirsty Short‘s stalwart CCI5* campaigner Bouncer, who swapped his usual duties for a starring role as the donkey in the nativity play at the school at which Kirsty teaches. The 18-year-old gelding, who has completed every European CCI5*, was reportedly a ‘complete professional’ about the experience. You can read more here.

National Holiday: It’s Green Monday – so named for all the, um, green we’re all going to drop on this, one of the biggest days for last-minute Christmas shopping. I’ll be real with you; I’ve barely started mine.

He’s one of the best jockeys the world has ever seen these days – but once upon a time, he was just a tiny rebel who fell off in his first-ever race. The Racing Post takes a look back at Frankie Dettori’s inauspicious start on the eve of his fiftieth birthday. [‘He couldn’t speak a word of English. He could barely speak a word of Italian’]

Sure, it’s annoying when your horse kicks his stable door for his dinner – but it could be a sign of significant stress, too. New research suggests that off-schedule feeding could be posing a welfare concern for your horse, so if you’re habitually a bit late to start each day, consider this your Monday motivation. [Study: Off-Schedule Feeding Compromises Horse Welfare]

The British Horseracing Association is reviewing its process for approving horse names after a runner named for a racial slur caused outcry over the weekend. Though the horse’s trainers claim the mistake was an innocent one, with the name coming from a computer game, it’s a stark reminder of the fallibility of the current systems in place to spot problematic nomenclature. [BHA to conduct review after racehorse runs with racial slur as its name]

It’s a racing-heavy sort of Monday, but if you’ve been following the curious case of Oisin Murphy and his positive (and then negative) cocaine tests, you’ll enjoy this interview. 2020 has taken us from positive equine tests after a sneaky stable wee to positive jockey tests after an illicit liaison – be careful out there, kids. [Oisin Murphy exclusive interview: Sex, drugs, Justin Bieber – and why he will not succumb to self-pity]

We’re so delighted to see Caitlin Gooch of Saddle Up and Read in the spotlight after her charity and mission got a huge shout-out from Oprah Winfrey. We’ve sung the North Carolina-based equestrians praises before for her brilliant work in providing both literacy and horsey opportunities to underprivileged kids, and we’ll keep on doing it. Check out this great piece published by CNN over the weekend. [Meet the Black cowgirl who inspires children to read]

And finally, it’s a piece behind a paywall, but if you’re among the many eventers wondering why the discipline won’t get a European Championships next year, the FEI has released a statement explaining it. Though a social media campaign by Michael Jung has enjoyed some traction and put Swiss CCI4*-S venue Avenches into the spotlight, no formal bid was ever made to host the Championships. [Decision to cancel eventing Europeans explained following social media debate]

What I’m Listening To: If I’m honest, I currently spend most of my time revisiting the questionable music of my early teenage years, because as it turns out, screamy lip-ring music is absolutely ideal for smashing out a good gym sesh. But in between guitar solos, I’ve been loving The Worldwide Tribe‘s podcast, Stories About Refugees. Each episode focuses on a different person or works to demystify global conflict or more home-grown legislature that contributes to the ongoing refugee crisis, with one crucial message at the heart of their work – refugees are more than just their search for a safe home. They are, ultimately, people.

Curious about how young horse classes work, or have a youngster of your own you’d like to debut in 2021? This helpful primer from Martin Douzant explains the conformation and turnout that’s expected.