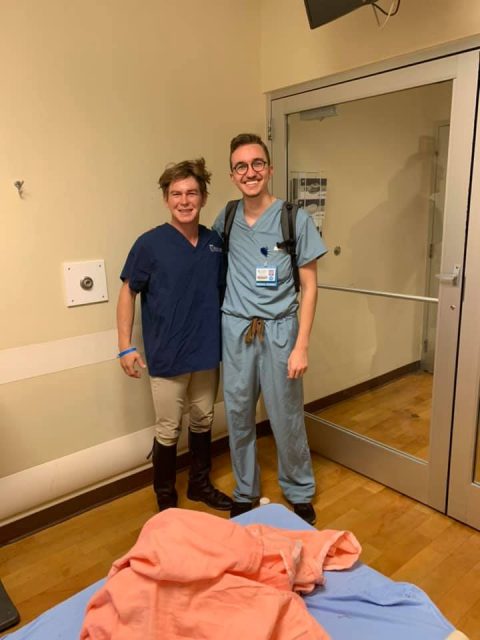 Briggs Surratt with his good friend (and med school student!) Alex Weaver upon discharge from the hospital. Photo via Briggs Surratt on Facebook.

Please join us in wishing a speedy recovery to Briggs Surratt, an indispensable member of Team Wallace Eventing, who suffered a kick to head while trying to mount a skittish horse on Friday. Thankfully, Briggs was wearing a helmet and though he was briefly knocked unconscious and will be further monitored for a concussion, he’s been discharged from the hospital and is walking away from the incident with a smile on his face. The EN team sends you our very best wishes, Briggs!

Horse and rider falls have dropped to an all-time low in Ireland the during the 2019 season. At the beginning of 2016, the EquiRatings Quality Index (EQRI) was introduced in all Eventing Ireland competitions. This year, the cross-country jumping clear rate has increased to 81.3%, the rate of horse falls dropped to 0.49%, and the rate of rider falls has dropped to 1.81%. [Eventing Ireland and EquiRatings making strides in safety]

Sir Mark Todd still has his eyes on Tokyo, but don’t hold your breath — he’s not interested in competing after announcing his retirement earlier this year. His main interest lies in his former ride McClaren, his 2018 WEG mount, who now has Jonelle Price in the stirrups. He appears to think they’ll be a shoo-in for the New Zealand Olympic team if all goes well with the new pairing. [Interview: Sir Mark Todd still has Tokyo Olympics in mind]

Fouaad Mirza is the first equestrian from India to secure Olympic qualification in 20 years. The 27-year-old eventer was a double silver medalist at the 2018 Asian Games with his top horse, Seigneur Medicott, who was previously campaigned by Bettina Hoy. With Seigneur Medicott sidelined due to injury, Fouaad garnered enough points for qualification riding two of his other horses: Fernhill Facetime and Touchingwood. [Indian Equestrian Fouaad Mirza Secures Tokyo 2020 Berth]

Monday Featured Video: (You’ve got to watch to the end!)