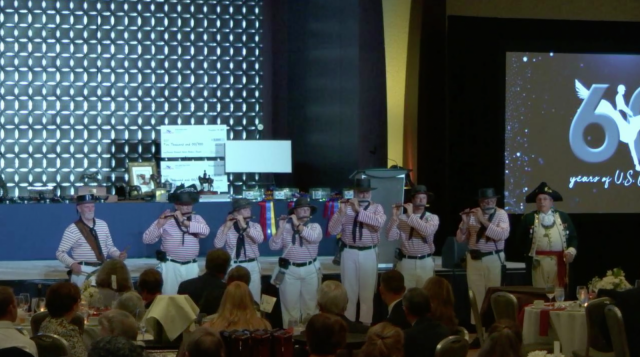 In grand Bostonian style, newly-minted USEA President Max Corcoran was ushered into the ballroom for the awards dinner & 60th anniversary celebration by a fife and drum band, adding a little extra insanity in the middle to the eventing. They entertained the crowd with some of the Revolutionary era’s greatest hits including Yankee Doodle and, fittingly, The President’s March before marching their way out of the ballroom and allowing dinner to get underway.

The Dutta Corp. has signed on as the new title sponsor of the YEH Championships. Rob Burk included this announcement in this CEO Report given during the USEA Annual Meeting of Members. As part of this sponsorship, the The Dutta Corp. will be generously providing the winner of the Holekamp/ Turner Grant, which is awarded to the highest scorer of the YEH 5-year-old Championships out of either the East and West Coast Championships, with a free flight to Le Lion d’Angers in France for the 7-year-old two-star Championships. [Changing of the Guard at the USEA Annual Meeting of Members]

Area 1 really does it right!