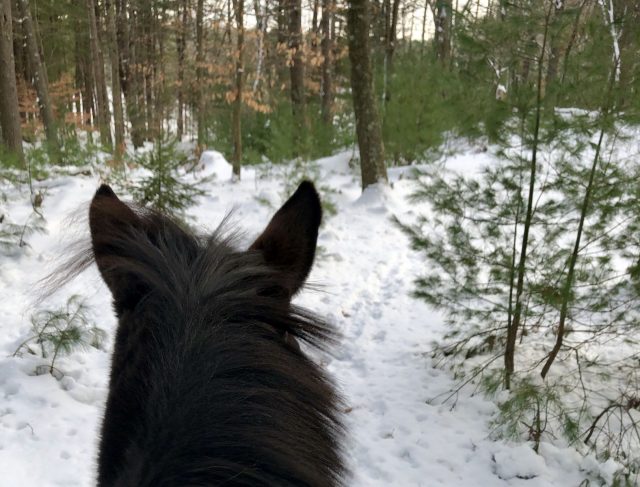 ‘Tis the season for long walks in the woods — snow optional! As much as I enjoy the rush and hype of the show season, I also enjoy this part of the year where we get to slow it all down and savor the moments without the pressure of a looming lesson or event. There’s nothing I love more than a pensive amble through the woods this time of year, especially if the temperature sneaks above freezing!

Year end points British Eventing points have been totaled and the top rider and horse(s) crowned! At the conclusion of #YearofthePig it’s Piggy French who earned BE’s Top Rider of 2019 with 1,768 BE points. At 423 points each, Ballaghmor Class and Zagreb share the honor of BE’s Top Horse of 2019. [British Eventing Points League Winners Announced]

It’s almost that time of year again for New Years resolutions, but why not start practicing now? There’s just over week left until 2020, so consider this week a practice run before the real thing. Here’s a couple tips of setting realistic equestrian-related resolutions and even a few good ideas to get you started. [For Successful Equestrian New Year’s Resolutions, Start Now]

Fighting Furrari, the primary horse used in the 2003 movie Seabiscuit, has been retired from his duties as Santa Anita’s mascot, but he has a new job to do. “Fred,” as he’s better known around the barn, will relocate to Square Peg Foundation in Half Moon Bay, California, which is a Thoroughbred Aftercare Alliance (TAA) accredited facility which uses retired racehorses for children with variety of diagnosis, including Autism. [Santa Anita’s ‘Seabiscuit’ Retired To Square Peg Foundation To Help Autistic Children]