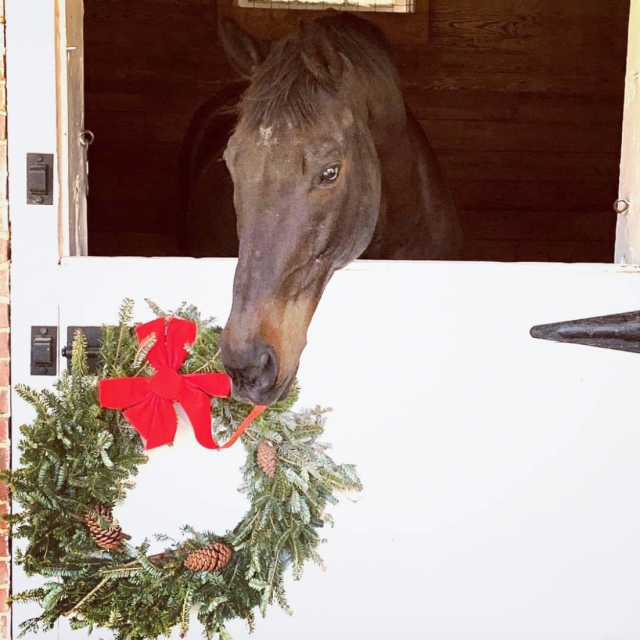 Looks like Boyd Martin’s 2014 WEG mount, Shamwari 4, had a very Merry Christmas! Now 17-years-old, he’s enjoying retirement in Aiken with George and Gretchen Wintersteen. Shamwari was initially campaigned by Sweden’s Ludwig Svennerstal who rode the gelding at the London Olympics and brought him through the former four-star level before Boyd rallied a syndicate to purchase him and import him to the U.S.

Area V eventer Brandy Savarese is the recipient of the 2020 Worth the Trust Adult Amateur Scholarship. After a heartbreaking 2018, wherein Brandy ended up having to euthanize her mare due to neurological and spinal complications, she signed a lease on a horse that would help her realize her dream of competing in horse trial. And it wasn’t just a lease on any old horse — it was a lease on Angela Bowles’ five-star mare, Novelle. Read her winning essay on the USEA Website and get inspired. [2020 Worth the Trust Adult Amateur Scholarship Winner: Brandy Savarese]

Pedigree isn’t everything when Carl Hester is horse shopping. Of course the dressage star doesn’t ignore a horse’s breeding entirely, but there are a few qualities that he places more value on. Those qualities include work ethic, paces, and the ability for the horse to connect with their rider. [Three Qualities Carl Hester Values In A Horse And Why Pedigree Only Gets You So Far]

Monday Featured Video: Don’t lie, you’ve always wanted to perform a dressage freestyle to the great LMFAO’s “Sexy and I Know It.” Germany’s Lena Waldmann & Cadeau Noir did just that last week at in the National Freestyle Competition at Franfurt. Watch their performance that brought the house down:

Lena Waldmann and Cadeau Noir at the Frankfurter Festhalle 2019

Our German team covered the famous CSI3*/CDI5* LIVE from Frankfurt this weekend 💕 The atmosphere was amazing and one of the highlights is always the National Freestyle Competition – watch the great performance by Lena Waldmann & Cadeau Noir (Christ x De Niro) below to get a glimpse of what this show has to offer 🔥😍▶️watch.clipmyhorse.tv/InternationalesFesthallenreitturnier