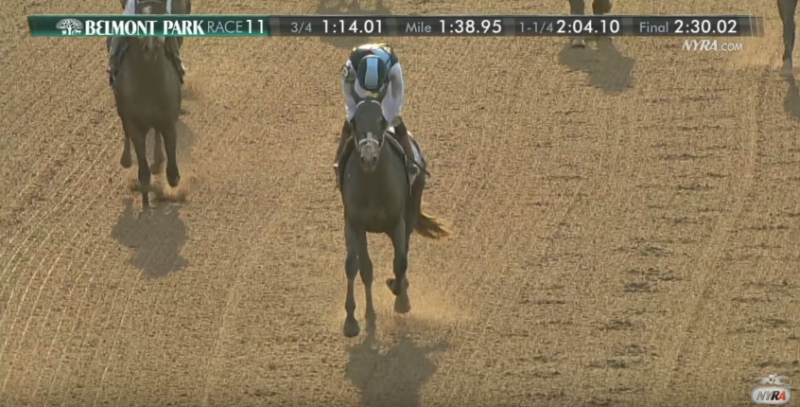 I got zero return on the $5 online bet I put down on Tapwrit in the Kentucky Derby. I’m a sucker for babies of Tapit, the hunky grey stallion whose $300,000 stud fee once topped HN’s Valentine’s Day roster of Thoroughbred sires ranging from “cheap box of chocolates” to “nice dinner at a steakhouse” to “diamond ring and a tiara.” And you thought a dozen roses were expensive … equine courtship in the racing world ain’t cheap!

Tapit (Pulpit – Tap Your Heels, by Unbridled ) has produced a number of successful stakes winners, including last year’s surprise Belmont winner Creator (Tapit – Morena (PER), by Privately Held). Watching Tapwrit (Tapit – Appealing Zophie, by Successful Appeal) workout in the leadup to the Derby, I swooned over his liquid gallop, chill expression and pewter coat, and was bummed when he finished sixth.

Turns out I just put my money on the wrong race! After skipping the Preakness to rest and train, Tapwrit entered the starting gate at the 2017 Belmont Stakes at 5-1 odds, with Jose Oritz in the irons. They stalked the leaders until the stretch, then swept past favorite Irish War Cry, who led the majority of the race, on the for the win. Watch for the turboboosters to activate at around 2:26 on the video replay!

Lots of people picked one-eyed Patch, trained by Todd Pletcher and Tyler Gaffalione, as their Derby underdog favorite. He drew the outside post position, with his blind eye facing the field, and finished near the back of the pack. The poor horse, who can’t seem to get a break, drew the far outside post again in the Belmont, but this time made a big comeback to finish third. Go Patch!

Another nailbiting moment came when Hollywood Handsome clipped heels with the horse in front of him in the first turn. He almost went down, and jockey Florent Geroux lost his stirrups, eventually managing to guide the horse to the outside until he could be stopped. Both horse and rider are fine, excepting a cut the horse sustained behind its right knee that had to be closed with staples.