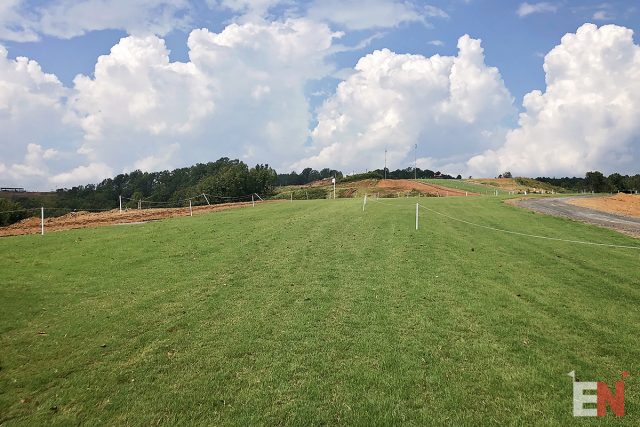 The view up The Hill at the tail end of the 2018 WEG course.  Photo by Jenni Autry.

We heard so much about The Hill leading up to the 2018 World Equestrian Games — a 600 meter pull the the end of the White Oak course at Tryon International Equestrian Center ascending to the finish line near the stabling area. Aside from, you know, the whole building of the course in time for the event, The Hill was the talk of that championship track (along with how the weather would affect the going that day) as it was likely to play a major roll in the ability of competitors to catch the time if they were nursing a tired horse late in the course.

This past weekend at the MARS Tryon International Three-Day Event was the first time we saw riders gallop the opposite direction — down The Hill. Not only would riders have to manage a fresh horse galloping downhill right away out of the start box, but they’d have to manage it on some soft footing given the major rainstorm and flooding earlier in the week. While there was some trepidation and uncertainty amongst the riders regarding how it would ride, the Tryon grounds crew worked tirelessly to ensure that the footing on course would be safe going.

This might not be the most exciting video we’ve ever shared, but I think it gives the viewer a great perspective of how long and steep this hill actually is if you’ve never been to Tryon to see it for yourself. Just imagine trying to control a fit four-star horse down it right after you’ve left the start box or trying to manage a tired horse up it after they’re already galloped for eight minutes! It’s no easy feat in either direction.

Thanks to Elisa Wallace for sharing this view! She was the very first rider to leave the start box on Saturday morning aboard her CCI2*-L horse Sharp Decision, jumping clear and picking up a few time penalties. She jumped a double clear round later in the division when she left the box aboard Munson Slew later on.