Exciting stuff is afoot, literally, at Morven Park International Equestrian Center in Leesburg, Va.! The 250 competitors contesting this weekend’s Morven Park Spring H.T. will be among the first to leave hoofprints in three new arenas furbished with footing from Attwood Equestrian Surfaces.

Nick Attwood, President of Attwood Equestrian Surfaces, personally oversaw the arena revitalization project, which was completed over the course of several months.

“It’s so rewarding to be here now, having been involved from the actual planning stages, to see the arenas beginning to take shape,” Nick told us last October. At that time the arena base had been established, with the next major steps being the installment of the drainage system and then the footing. “We will be hands on until the first horses come to compete, and will continue to maintain these arenas for years to come. Partnering with Morven Park means a great deal to us.” 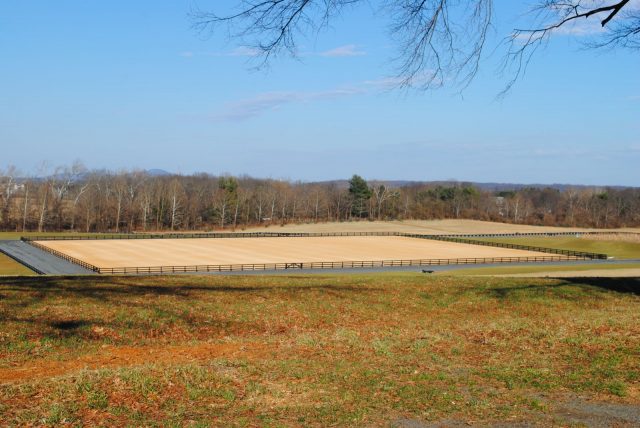 State-of-the-art footing means a great deal to competitors as well. Four-star eventer Caitlin Silliman was among the first riders to experience the new Attwood footing at Caroline Horse Park when she competed at Southern Pines H.T. earlier this month, placing first and second in the Intermediate combined test with Vagabon de Champdoux and Ally KGO respectively.

“It was fantastic,” Caitlin says of the new footing. “It’s already a beautiful event and the footing changes the look quite a bit.”

In addition to the new arenas, a new jog strip was installed beside the Grand Prix arena. The strip is dedicated to Margaret Wood, made possible thanks to the generosity of the Major family and the Loudoun Hunt Pony Club.

Morven Park will host 16 divisions of Beginner Novice through Intermediate on Saturday and Sunday. With no rain in the forecast and temps hovering around 60, all systems are a go for a beautiful weekend of sport.

“We are excited to be hosting the Morven Park Spring H.T. in our brand new outdoor riding arenas this year,” says Sheryl Williams, Morven Park’s executive director. “We are thankful for the equestrian community’s continued support of the arena project and the International Equestrian Center and wish our competitors a great ride over the weekend.”

Morven Park will be hosting an open cross country schooling day on Tuesday, April 3, with courses still set from the horse trial. Cost is $50 per horse/rider; see the website for details.