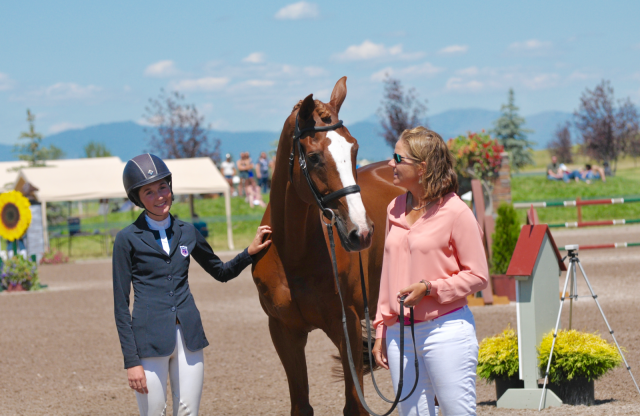 Mr. Medicott with Olivia Dutton and Max Corcoran during his retirement ceremony. Photo by Leslie Wylie.

There was hardly a dry eye at Rebecca Farm yesterday afternoon as the indomitable Mr. Medicott was officially retired in an emotional ceremony in Kalispell, Montana.

At 19-years-old, Mr. Medicott completed the 50th international competition of his career yesterday with Olivia Dutton, jumping a clear show jumping round and winning a gold medal for the Area II CICOY2* team at the Adequan FEI North American Youth Championships.

After the prize giving, Mr. Medicott, better known as “Cave,” entered the main arena one final time, led by his former longtime groom Max Corcoran and Olivia. Sarah Broussard, event organizer at Rebecca Farm and one of Cave’s owners, placed a garland of flowers around his neck. 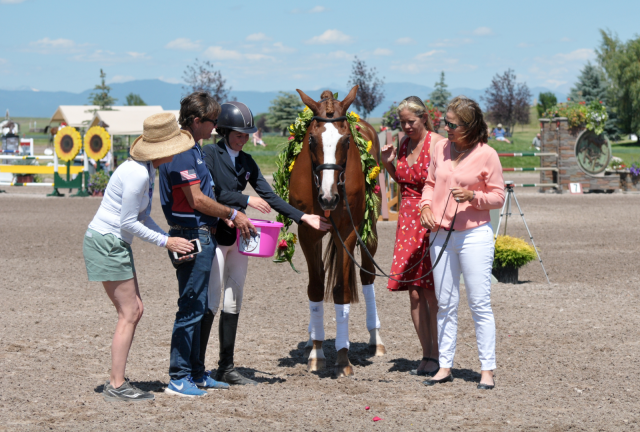 Cave eating a bucket of carrots during his retirement ceremony. Photo by Leslie Wylie.

“It’s been an incredible honor to have been a part of this amazing horse’s career,” Phillip said. “There are so many people who deserve to be thanked and recognized for helping to make his time in the USA so successful.

“Also, I would like to thank Max Corcoran and Emma Ford for their incredible care and love of Cave. And finally, to my daughter, Olivia, who gave Cave her love and attention that only a 16-year-old girl can give to her best friend. And to Cave who gave Olivia the thrill of riding around some of the biggest courses for her to date and most importantly looking after her for me.” 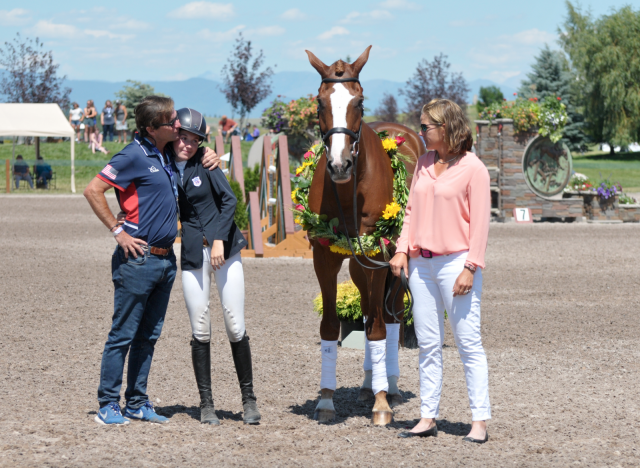 Father and daughter honoring a horse who gave them both so much. Photo by Leslie Wylie.

It was a fitting end to a storied career for Cave. Originally named Crag Cave Slieveluachra (Cruising X Slieveluachra, by Edmund Burke), he was bred in Ireland by Dr. Donal Geaney. He was produced as a 4-year-old by Francis Connors in Ireland before starting his international career with Germany’s Frank Ostholt. Cave won team gold for Germany at the 2008 Olympics and also represented Germany at the 2010 World Equestrian Games.

Cave then came to the U.S. as a partner for Karen O’Connor, who piloted him to a fourth place finish at Kentucky CCI4* in 2012 and ultimately finished ninth at the 2012 Olympics as the highest placed U.S. combination. He finished in the top five in all three of his international competitions in 2012 to be named the 2012 USEA Horse of the Year and top the World Breeding Federation for Sport Horses (WBFSH) eventing rankings. 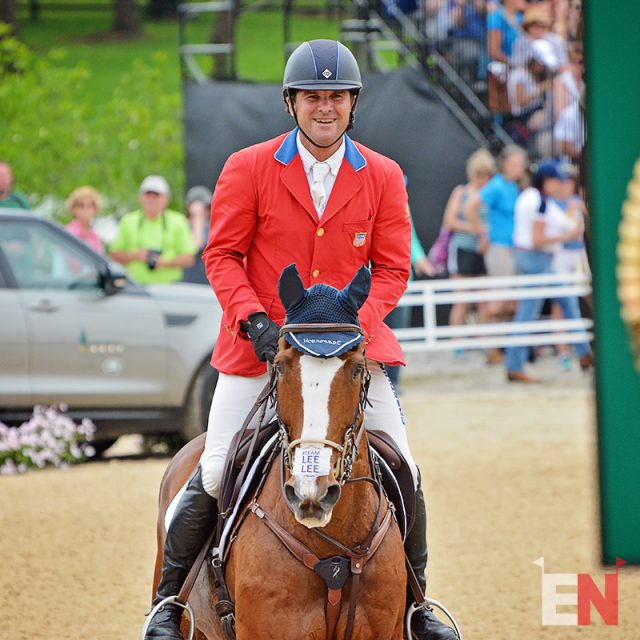 Phillip Dutton and Mr. Medicott at Kentucky CCI4* in 2017. Photo by Jenni Autry.

After Karen retired, a new syndicate was formed to purchase Cave for Phillip to compete. He finished fourth at Pau CCI4* in 2013 with Phillip and was unfortunately sidelined by a series of injuries for the following two seasons. Cave made his triumphant return to the CCI4* level in 2017, and at 18 years old he finished fourth at Kentucky to be named the USEF National CCI4* Champion.

Cave will now return home to Phillip’s base at True Prospect Farm in West Grove, Pennsylvania to start his well earned retirement. Please join the EN team in wishing Cave a very happy retirement. Thank you, Cave, for all the memories. What a horse!