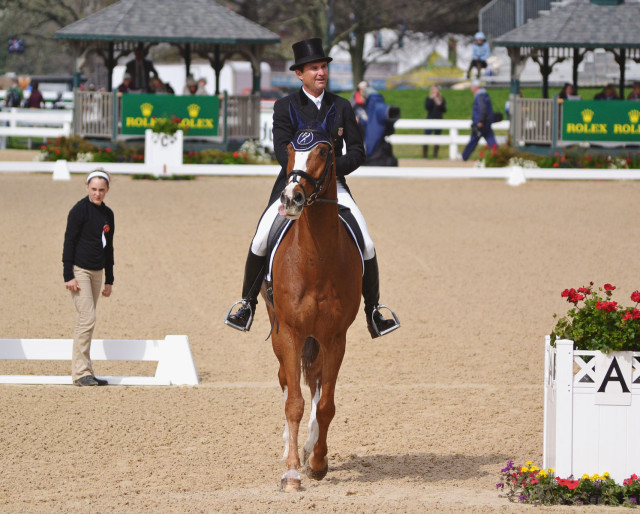 Phillip Dutton has announced on his Facebook page that he is officially withdrawing Mr. Medicott from consideration for the World Equestrian Games team. Cave aggravated an old tendon injury on cross country at Rolex and was withdrawn before the final horse inspection after sitting in third place overnight. The statement reads:

Thank you for all the kind messages of support we have continued to receive about the Mr. Medicott Syndicate’s Mr. Medicott. After consulting with our vet team and speaking with his owners, we have decided that it’s in Cave’s best interest to pull him out of consideration for the World Equestrian Games team. I couldn’t be more happy with how his leg is healing, and we know that getting the tendon strong again before bringing him back into proper work will ensure his soundness longterm. He is continuing to enjoy being in light work during this period of rehabilitation, and I’m grateful to the owners for their support as we work to get Cave back to doing what he loves.

We knew it would be a long shot for the horse to come back in time to compete at Normandy, but it’s still a blow nonetheless to officially lose such an experienced horse from the list of contenders. Phillip has ridden at every Olympics and World Championships since 1994, and he still has Mighty Nice, who will compete at Luhmühlen, in contention for WEG.