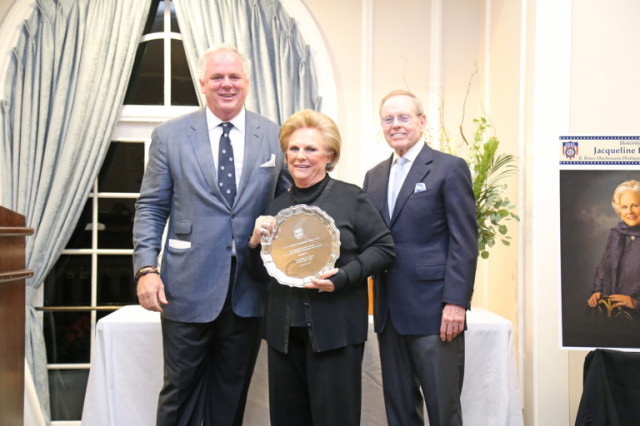 Ms. Jacqueline Mars’ generosity and dedication to the sport of eventing is nothing short of extraordinary, and a more fitting recipient of the USET Foundation’s 2017 R. Bruce Duchossois Distinguished Trustee Award there could not be.

“I am very honored to be receiving this award, and I’m very emotional about having Bruce’s name on it,” said Mars. “We all miss him so very, very much. This organization, through the years, has done more for me than I ever could have contributed. The experiences, friendships and events that I’ve been a part of have been wonderful. All I can say is, thank you all so much for what you have given me.”

Because we as participants of the sport cannot sing Ms. Mars’ praises loudly or frequently enough, we’ll let the USET Foundation do the honors this time around:

For over four decades, USET Foundation Honorary Life Trustee, eventing horse owner and long-time loyal supporter of equestrian sport, Mars, has lent her wisdom, passion and philanthropy to the United States Equestrian Team and the USET Foundation. Mars has served as vice president, member of the executive and investment committees and co-chaired the Campaign for Continuing Our Competitive Excellence, which raised $36.5 million for the United States’ high performance programs. Mars is also the benefactor of the USET Foundation’s Jacqueline B. Mars Competition and Training Grant, which helps offset the costs of competing and training at the highest levels and is awarded to an eventing athlete for their impressive record and potential to represent the United States in future international competition.

Mars has guided the careers of not only some of the United States’ most successful and elite riders, but she is also continually ensuring the next generation of team riders and horses are being prepared and ready to step up when their time comes.

As an owner, Mars has supported such notable athletes as Giltedge, Prince Panache and Hannah Sue Burnett’s Pan American team gold medal winning mount Harbour Pilot, among others. She is also a member of the Mr. Medicott syndicate in support of 2016 Rio Olympic individual bronze medalist Phillip Dutton and owns a number of mounts for eventing Olympian Lauren Kieffer. Mars generously established “The Giltedge Challenge” in 2012 on behalf of the USET Foundation, which raised $1.5 million for eventing programs and honored the truly extraordinary career of Giltedge, who so proudly represented the United States on medal-winning eventing teams at the 1996 Olympic Games, 1998 World Equestrian Games, 1999 Pan American Games, 2000 Olympic Games and 2002 World Equestrian Games

A true champion, Mars’ distinguished service through excellence in leadership, philanthropy and character has positively impacted the Foundation’s mission of supporting athletes, promoting international excellence and building for the future.