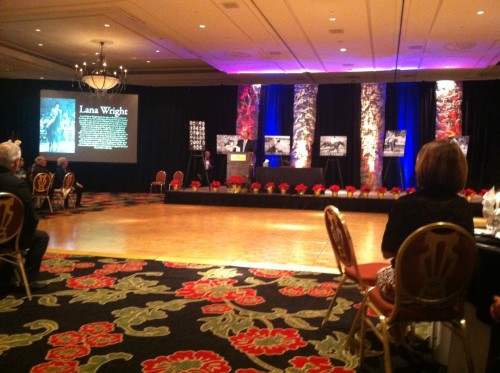 The USEA Hall of Fame Dinner featured unbelievably moving speeches by presenters and inductees alike.  Amy Tryon’s introduction speech by her long time team mate David O’Connor and then her induction speech by her husband Greg had the entire room in tears.  Tonight’s inductees were Amy Tryon, Roger Haller, The Grey Goose, Lana Wright, and Giltedge.  I believe the USEA will post videos of the speeches, so I will not try to recap them any more than to say that MC Jimmy Wofford led the night with his typical oratory brilliance.

The big breaking news of the evening came after Giltedge’s induction speech when USEF sport horse program director Jim Wolf walked to the podium and announced that longtime major eventing supporter Ms. Jacqueline Mars has started the Giltedge Challenge, which pledges $500,000 to support US eventing programs as long as the donation can be matched by the eventing community by June 1st of next year.  Jim said that thanks to support from top eventing supporters including the Wildasins and Broussards, we are already well on our way to meeting the match.  Jim then asked for help from the rest of the community to match the initiative.

Ms. Mars has owned some of our country’s top horses for many years as well as generously supported eventing initiatives including the young event horse program.  Tonight David O’Connor called Ms. Mars the greatest supporter our sport has ever had and I am very much inclined to agree with him.  David’s new US high performance program is going to take a lot of funding to accomplish, and I want to thank Ms. Mars and the other generous supporters for helping our program tonight.  Go eventing.