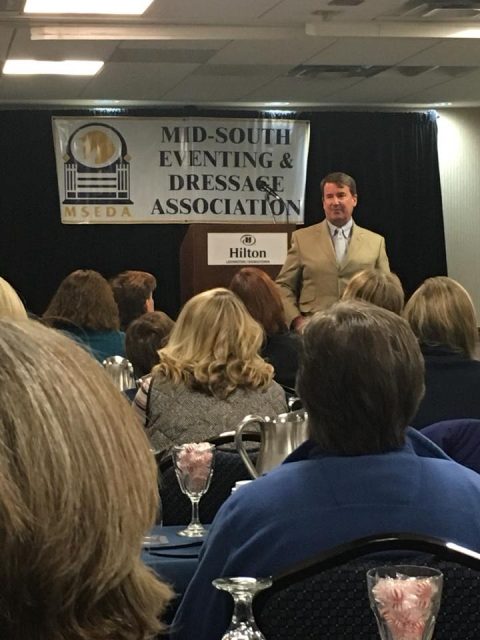 A few notes from day one of the forum:

Coaches and Trainers Determine the Future

In the Saturday morning session, O’Connor discussed risk management and the future of the sport. He stated that he believes the answer is in coaching, particularly for amateurs and enthusiasts who compete at the lower levels.

When it comes to learning, O’Connor explained that most riders are visual learners. Throughout the weekend he encouraged everyone in the room to pick a rider to imitate — one that shares their same body type.

“If you don’t have long legs, don’t imitate William Fox-Pitt,” he said. “Find someone your body type to imitate. Most riders are visual learners and learn from watching. Study your favorite rider (with your body type) to improve your riding.”

Looking to the future, O’Connor spoke to the addition of the Modified Level, stating that it is a great example of the improvement of communication between the riders and the governing bodies. He added that the voices of coaches and trainers need to be stronger to continue improvement of the sport.

Eventing in the Olympics

“Do YOU think Eventing needs to remain in the Olympics?”

To help the crowd make an educated decision, O’Connor noted that if the sport were to drop out of the Olympics, it would lose one million dollars of funding overnight.

O’Connor believes that the Olympics do not have to be our “norm”; instead, he views it as a showcase. He also argued that changing the name of the level from a four star to a five star makes the levels easier to for the public and the media to understand because it is already used in dressage and show jumping. All equestrian Olympic sports will now use the five star to recognize their highest level. 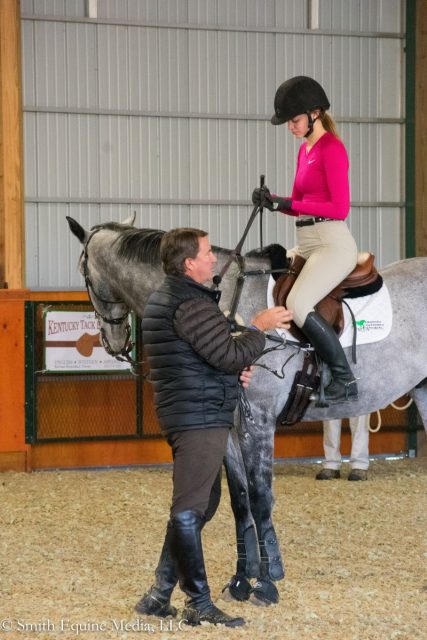 From the Horse’s Perspective

To prepare the attendees for the riding portion of the educational forum on Sunday, O’Connor reviewed the basics of the sport, starting with the Training Scale. The theme of the weekend was that all training should be done with the horse’s perspective in mind: “It is NOT the horse’s job to speak our language, it is our job to speak theirs.”

O’Connor stressed that learning equestrian sports should be treated no differently than if you were to learn a high school sport such as basketball, golf or baseball. The techniques and theories should be learned in the same way, but many times aren’t.

“How do you hold a golf club? How do you swing a golf club? It’s the same in riding. Practice until it becomes instinct. If you have time to think about it, you’re too late.”

As O’Connor continued to review fundamentals and theory, he was quick to remind everyone that to improve, you must understand the Training Scale and the mechanics of the horse’s movement. “Do you know why you need to know the Training Scale as a coach and as a rider? It’s what you’re getting judged on!”

During his discussion, O’Connor reviewed the importance of rider position, the horse’s frame, the purpose of the half halt and how to incorporate lateral work. Using the passage as an example, O’Connor taught a basic lesson on position.

“If you think about passage, it’s an extended cadence, but the horses are still traveling forward. If you were going to go rising trot, doing passage, what would you have to change? Airtime. You need to go higher and slower. This is how I teach people half-halts. Your seat dictates the tempo. Your seat dictates the length of stride. Your leg is the energy into that. This is my first lesson for almost everybody. This is the ‘Oh my God’ lesson.”

Stay tuned for Part 2, covering the riding portion of the forum: “All the Levels – Demonstration & Discussion of Required Skill Sets.”