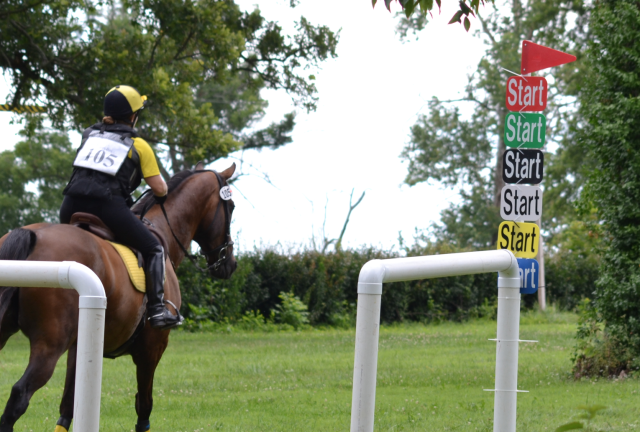 The gap between Training and Prelim is regarded by many as the largest in the sport. In the past some horse trials have offered Prelim/Training divisions, featuring Prelim dressage/show jumping and Training cross country, to buffer the transition, but up until now a true hybrid of the two levels has not been available.

Beginning in 2017 a new Modified level will be making its debut at USEA recognized events, offering a true stepping stone experience for horses and riders looking for an intermediary between the two levels.

Modified level specs via the USEA:

The Modified level is open to horses 4-years-old and older.
Riders must achieve two NQRs at Training level to compete at Modified.
Max height of both cross-country and show jumping fences is 3’5”
Cross-country course distance will be: 2200m-3000m with 22-28 jumping efforts
The speed of cross-country will be 490mpm
The speed of show jumping will be 325 mpm with 10-13 jumping efforts
Flags will be numbered with an orange number on a blue background
The fourth refusal on cross-country results in elimination
The third refusal on show jumping results in elimination
An ‘r’ course-designer is required for cross-country
Cross-country courses can include: angled lines, corners, varied terrain and combinations with water or narrow fences.
The show jumping course will include two doubles, or a double and a triple combination.
The dressage test will be held in a small ring and will include leg yield, medium gaits and changes of lead through the trot.
Full rules for the Modified division are available in the 2017 USEF Rules For Eventing

The only two events that have signed on to host the level thus far are Heart of the Carolinas and Coconino, but as interest in the division increases we expect to see it added to other competitions. If the Modified level is something you would support, be sure to share your interest with event organizers!