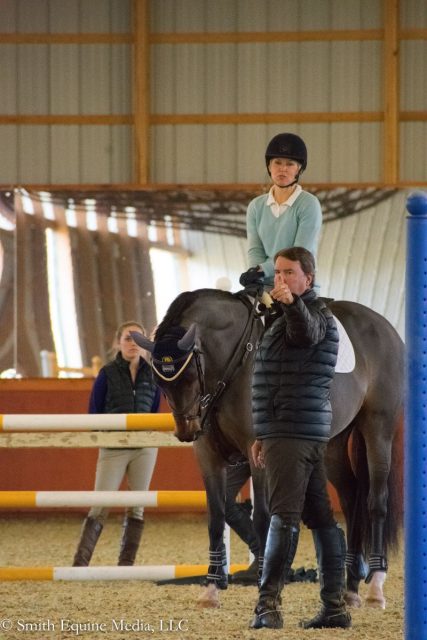 On Dec. 2-3, Mid-South Eventing & Dressage Association welcomed David O’Connor to the bluegrass for two-day educational forum. The first day consisted of in-seat education — read highlights from that in Part 1 here. The second day was a demonstration at the beautiful Valley View Farm in Midway, Ky.

There were four demonstrations throughout the day that focused on the development of horse and rider through the Beginner Novice, Novice, Training and Preliminary levels.

Although the horses and riders ranged in experience, O’Connor had each group start out with the same exercise. On a circle he had two poles randomly placed and asked each rider to trot over them. After a few rounds, he asked them to canter the poles and then challenged the riders to change the speed of the horse to get in more or fewer strides. For example, he asked the riders to canter from the center of one pole to the other in four-strides, then from the inside of one pole to the inside of the other pole in three strides and the same for the outside in five strides.

O’Connor’s solution to the rider’s problems was simple. The answer was that you should either go faster or slower — that’s it.

The Beginner Novice and Novice groups both had green horses, so O’Connor focused on developing their rhythm and balance using basic jumping grid exercises.

When it comes to the lower levels, O’Connor reminded riders to think of the horse’s perspective. He spent a few minutes discussing the importance of natural horsemanship while he gave a demonstration on groundwork. He added that you don’t have to be a guinea pig when it comes to a green horse. For example, the first time you ask a green horse to jump a ditch, do it on the lunge line and let the horse figure itself out without putting yourself in harm’s way. Once the horse has gained confidence in jumping the ditch, then you can get it on and try it yourself.

In the Training group, the riders were local professionals Megan Moore and Allie Knowles with green horses. Since O’Connor had more experienced riders in this group, he focused more on the horses. 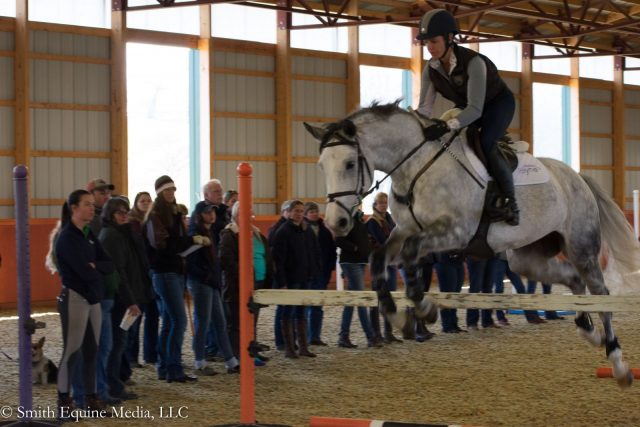 To assess the horses’ suitability for upper levels, he set up a grid to test their jump. To start out, O’Connor asked the rider to go down a line with a single square oxer. Each time they approached, he added a bounce pole in front of the fence. By the end, he had set six bounce poles approaching the fence. O’Connor then removed all of the bounce poles and set up the oxer where the front rail was much higher than the back rail. He asked each rider to go down the line several times while he raised the back rail or widened the oxer to test the horse’s limits. It was very fun and exciting to watch!

He also reminded everyone that roundness in dressage is NOT the same as roundness in jumping. He wants the horses traveling straight and square, not with necks bent and haunches to the outside.